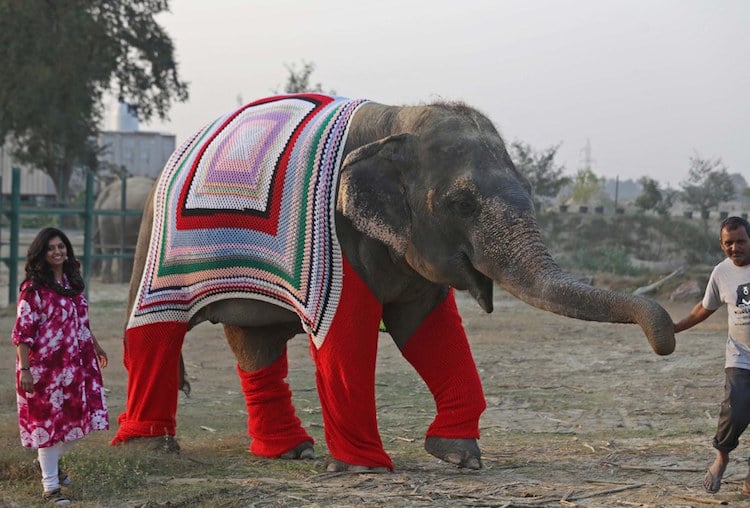 When the villagers saw that the elephants were feeling the dropping temperatures, they decided to do something about it. (Image: via Wildlife SOS)

Asian elephants are wild animals. In places where they are subjected to extreme temperatures, these gentle giants often find their own ways to stay warm. Also, they are raised in the wild and are kind of used to those climatic conditions. But these 23 rescue elephants are survivors of abuse. They are rescued from various inhumane places. As they have led a life of captivity with no proper nourishment, their immune systems are weak. A weaker immune system often leads to pneumonia in animals when subjected to the cold. Many of these rescue elephants suffer from arthritis. This is a condition that gets aggravated in a cold climate. Thus, the need for sweaters for them is not just to put on a colorful display.

The survival of the elephant in India is critical to the survival of the entire species in Asia. Home to almost 60 percent of Earth’s remaining Asian elephant population, India is plagued with a lack of awareness and education that is leading to the persistent enslavement of these majestic animals for tourism, manual labor, performances, processions, entertainment, and street begging.

Wildlife SOS leads efforts to protect the wild elephant population in India. They rescue, treat, and care for elephants exploited in the abusive tourism and “begging elephant” industries. They work to end the plight of injured and sick elephants that are forced to work in unnatural conditions. They aim to reach out and help elephants that are blind, elderly, wounded, malnourished, and dehydrated, or those being used illegally and commercially under deprived conditions.

Acts of kindness that you can do now

Humans by nature are kind and helpful beings and a lot of times, dogs and cats, strays especially, have been recipients of such acts of kindness. Stray dogs and cats need the utmost attention and care. Fortunately, a lot of people have since recognized this need and some have started up animal welfare groups where dog and cat advocates, professionals, and volunteers come together to share their time, skills, and resources to help stray dogs and cats.

Thanks to their kind hearts, many missing dogs and cats have been found and reunited with their owners. Some have been brought to animal shelters and are properly fed and cared for. The luckier ones found their way into loving and nurturing homes with their human families.

Here are three small things you can do now to help stray dogs and cats:

Stray dogs and cats come from different backgrounds. They can be lost pets with owners looking for them, dogs and cats abandoned by their owners, or dogs or cats that are offspring of strays. When you find a stray dog or cat, you must first assume that he could be just a missing dog or cat with an owner. It cannot be helped that a wandering dog or cat may be thought of as stray when he’s not. They may look shabby and unkempt, but that doesn’t mean they don’t have an owner. They could be simply lost for days and somewhere in the same neighborhood, there might be a frantic owner searching for that dog or cat.

2. Report a stray dog or cat

There are times though when a dog or cat will run away when approached, making it impossible for you to check out its tag. Understand that stray dogs and cats are like people too. When they’re lost, they’re scared. When they’re hungry, they’re upset. Don’t be disheartened when the dog or cat you just found suddenly shies away from you and appears fearful and afraid. At this point, you can just focus on calling animal control to help you out. Give the exact location where you found the dog or cat and describe it as best as you can. It would help a lot if you had taken a picture of them just before they scurried off.

If you happen to find a stray dog or cat right in your neighborhood, you can take a picture of the stray and make simple fliers. Post these in the same area where you found the dog or cat. Seek the help of your neighbors in disseminating these fliers. Distribute as many as you can among local vets and animal shelters near you.