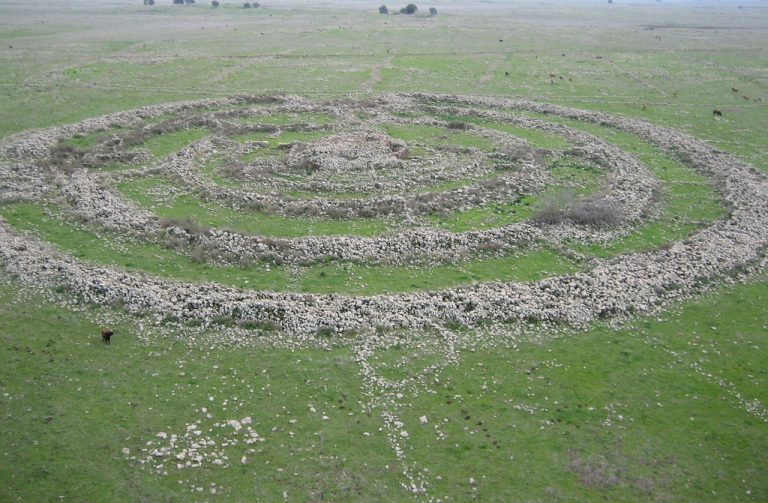 The monument is called Rujm el-Hiri, which means 'the stone heap of the wild cat' or more recently known as Gilgal Refa'im, Hebrew for 'Wheel of Giant,' referring to a biblical race of giants. (Image: via Wikipedia)

In a land dotted with ancient dolmens or tombs from a time before the urban centers of civilization had arisen in Mesopotamia and Egypt, stands a monument as old as Stonehenge. According to local legend, it was the “land of ancient giants.” The monument is called Rujm el-Hiri, which means “the stone heap of the wild cat” or more recently known as Gilgal Refa’im, Hebrew for “Wheel of Giants,” referring to a biblical race of giants.

Rujm el-Hiri was first discovered by archaeologists when an aerial survey was released after Israel captured the Golan Heights territory from Syria in 1967. The site sits 10 miles (16 kilometers) east of the Sea of Galilee in the western part of the historic Bashan plain of the Golan Heights. An archaeological survey was conducted of the area between 1967 and 1968.

It wasn’t until 1987-88 that full archaeological excavations were carried out. The excavations were conducted by Moshe Kochavi and Yonathan Mizrachi through the Land of Geshur Project of Tel Aviv University’s Institute of Archaeology.

Rujm el-Hiri has been dated to the Early Bronze Age II (3000–2700 BCE) period and is believed to be one of the oldest and largest structures in the region. The structure is made of thousands of small basalt rocks; if weighed together they would be 37,500 metric tons.

The stone monument has five concentric circles, the largest being 520 feet (158 m) in diameter, with the four smaller circles’ walls becoming progressively narrower. All the walls are connected perpendicularly by 36 randomly spaced smaller walls.

In the center lies the central tumulus, or cairn (tomb), built with smaller stones. At its core is a buried dolmen, or burial monument, which consists of two 5-foot (1.5m) tall stones that support a large horizontal stone. The dolmen lies over a chamber that connects to a 10-foot (3 m) long access corridor.

Archaeologists have traditionally dated this site and other ancient settlements nearby to the Early Bronze Age II (3000–2700 BCE) period. However, a reassessment was made when the site was excavated by Yosef Garfinkel and Michael Freikman of the Hebrew University of Jerusalem in 2007. In 2010, Freikman returned and has suggested the tumulus was built at the same time as the rings and not during the Late Bronze Age (1550–1200 B.C.) as previously thought. The rings have been dated to the Early Bronze Age based on artifacts found at the site.

The tomb would have included jewelry and weapons, but it was looted by tomb robbers.

Freikman’s theory is supported by the finding of an earlier phase of construction beneath the two later phases that contained the Bronze Age finds. There have also been other Chalcolithic sites discovered in the vicinity of Rujm el-Hiri, which include a similar but smaller stone structure that has been dated to the Chalcolithic period.

There have been several explanations as to what this site was used for: A place of worship with ceremonies held during the longest and shortest days of the year, a monumental burial site for a major chieftain or important leader, a place to conduct astronomical observations for calculations related to religious purposes or an ancient calendar for agricultural purposes.

All these theories are based on their understandings of the artifacts that were discovered and studies of the site. One theory does stand out from the rest; it takes into account the archaeological evidence, the cultural contexts of Chalcolithic practices, and also the surrounding Chalcolithic archaeological sites.

Dr. Rami Arav, co-director of the Bethsaida excavations northeast of the coast of the Sea of Galilee and Professor of Religion and Philosophy at the University of Nebraska, Omaha, wrote his theory in an article entitled Excarnation: Food for Vultures, which was published in the Biblical Archaeology Review.

He proposes the site was for both funeral purposes and for “excarnation,” the process of removing the flesh from the bones of the deceased for placement in ossuaries (bone boxes) by the Chalcolithic inhabitants. He describes small clay ossuaries that have been discovered in the hundreds at various archaeological sites that date back to Chalcolithic times.

In the 1st century B.C. and 1st century A.D., Jews in the Jerusalem area allowed the deceased to decay away to their bones for a year in burial caves before the disarticulated bones were placed into ossuaries. For the earlier Chalcolithic people of the Rujm el-Hiri, no evidence indicates how they managed to reduce the bodies to bones before placing them in their ossuaries.

In his article, he uses the ancient Zoroastrian dakhmas, or “towers of silence,” as an example. In this practice, vultures would be used to eat away the flesh from the bones of the dead that were placed on raised platforms, partly to protect the soil from any pollution from decaying bodies.

Because the concentric walls of Rujm el-Hiri are at progressively lower heights toward the central tumulus, he suggests that this would have allowed the vultures to have a better view of the laid-out bodies from where they sat on the walls. After the vultures finished, the bones would be freed of any flesh, and then could be disarticulated and placed in their ossuaries, which were designed to look like houses, miniature granaries, or silos.

Archaeologists have theorized that ossuaries symbolize the storage places for a new life, as granaries contained seeds or grain for new crop production. At least in this area of the ancient Near East, some have suggested that the ancient Chalcolithic people believed in a resurrection.

The ossuaries were seen as “magic boxes” that had the power to resurrect the dead.

One example of a “vulture shrine” was found at the famous Neolithic site of Catalhoyuk in southeastern Turkey. The shrine had a mural painted on the wall of vultures swooping over headless corpses, which has been interpreted as a possible excarnation scene.

As all theories go, however, these suggestions are just that — theories — and will no doubt cause a lot of debates and criticism, but Arav’s theory is intriguing and not that implausible.