Universal Values Across Cultures: A Taste of Your Own Medicine 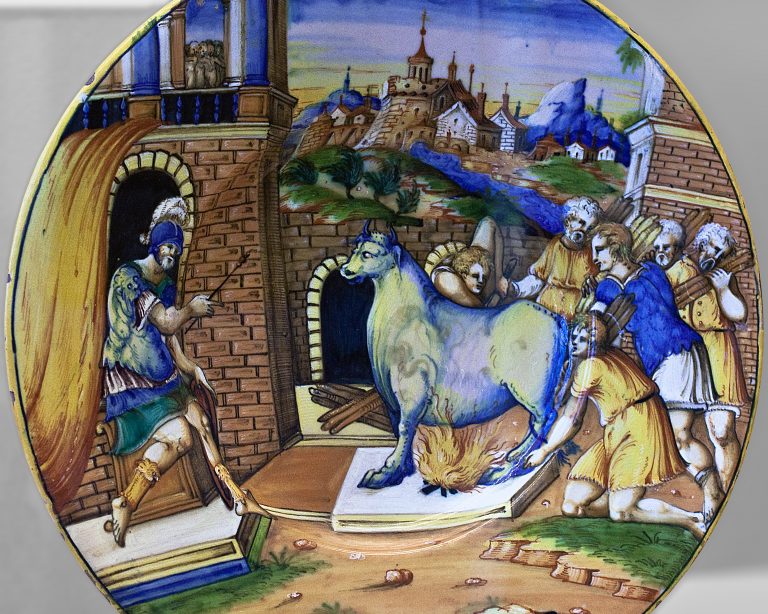 Phalaris in the bronze bull. (Image: Artshooter via wikimedia)

In the course of history’s development, Eastern and Western cultures are pretty distinct when it comes to their languages and belief systems, but their universal values are amazingly consistent. To illustrate this, there are two historical events that occurred during different time periods in the West and the East. Let’s explore the Western and Eastern stories of: “Please get into the jar sir, and try what you have devised against others!”

The Western version of universal values

From the time period of approximately 570-554 B.C., Phalaris was the tyrant of Akragas (now Agrigento) in Sicily. He was renowned for his excessive cruelty. He oppressed his people with his love of abusive torture and excessive violence and killing. To satisfy his bloodlust, he offered a high reward to anyone who could invent the best innovative torture instrument and present it to him.

In order to win the prize, a skilled craftsman named Porileus created the bronze bull or brazen bull. Here, the criminal was locked inside the device and a fire was set under it, heating the metal until the person inside was roasted to death. Unfortunately for Porileus , he became the first victim to be executed via his bronze bull invention. Since he failed to use his talent to benefit people, his execution could be viewed as a form of retribution for devising something to harm people.

Eventually, the atrocities of autocrat Phalaris aroused people’s anger. They overthrew and arrested him and burned him in the bronze bull.

The Eastern version of universal values

Tang Dynasty Emperor Tang Gaozong Li Zhi died in the second year of Yongchun (A.D. 683), and his son Li Xian succeeded him on the throne. Empress Dowager Wu Zetian attended to state affairs and wanted to grasp power, but many of the ministers were unwilling to submit to her. So Wu encouraged officials to snitch to her.

Zhou Xing, who served as Chancery Inspector, actively participated in whistleblowing and thus gained quick promotions. He was noted for inventing lots of torture devices that made criminals tremble at the mere sight of them. Many royal relatives and ministers were tortured to death with Zhou’s false accusations and coerced confessions. Zhou and Lai Junchen, another merciless official, killed many people via framing and torturing.

An ancient saying goes: “An unjust one is doomed to destruction.” Zhou, who got on in life as a tattler, was also tattled upon by a rat. In the second year of Tianshou (A.D. 691), Empress Dowager Wu got a secret letter stating that Zhou was plotting a rebellion. Empress Wu became furious and ordered a court official named Lai, who was once close with Zhou, to investigate the case. But Lai came up with an idea to handle the case in a special way.

One day, while dining together, Lai and Zhou talked about handling cases. Lai said: “Currently, most of the prisoners tend to plead innocent. Do you have any good ideas?” Zhou said: “It’s easy. You can take a big jar, heat it with charcoal fire, and ask the criminal to get into it. In this way, won’t we see if he doesn’t have anything to confess?”

At Zhou’s suggestion, Lai asked people to bring a big jar, piled charcoal around, and started heating it. Next, Lai stood up and told Zhou: “Someone accused you of plotting a rebellion. The Empress Dowager ordered me to scrutinize the matter. So please get into the jar, sir!”

On hearing this, Zhou was shocked and immediately kowtowed to plead for mercy. At that time, how many innocent people falsely confessed guilt on the spot because of being afraid of the torture methods created by Zhou? Finally, Zhou himself could not escape his inventive hell. His opponents killed him on route to being exiled to Lingnan.

The above story was later transformed into the idiom: “Please get into the jar, sir!” or “get a taste of your own medicine,” which means suffering from one’s own devious schemes. Surprisingly, the above two stories indicate that the universal values in the East and West show those who commit unjust acts will certainly reap what they have sown, which is an unchanging law in history.