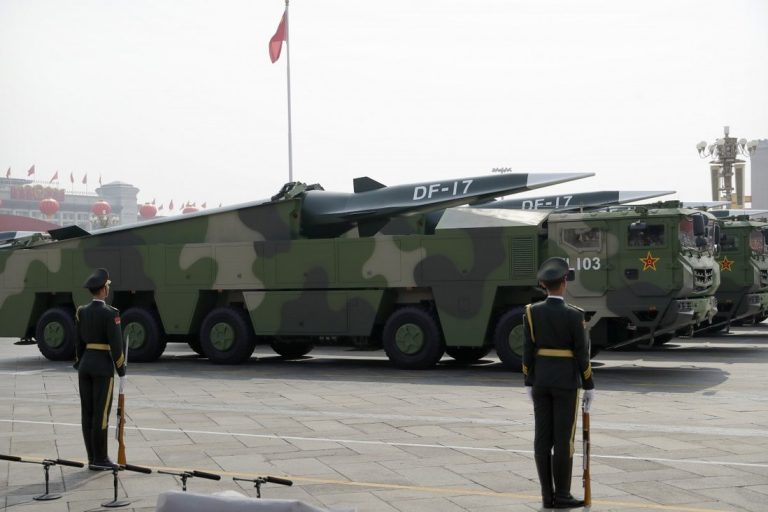 China's DF-17 missile is a medium-range hypersonic weapon capable of traveling over five times the speed of sound. (Image: via PLA)

China conducted two tests of its DF-17 hypersonic missile in July and August, the Financial Times newspaper has reported, raising concerns in the United States about the growing military capabilities of its geopolitical rival.

The newspaper reported that Beijing launched a rocket that employed a “fractional orbital bombardment” system to propel a nuclear-capable “hypersonic glide vehicle” around the Earth for the first time on July 27, according to four people familiar with U.S. intelligence assessments.

More than two weeks later on August 13, China conducted a second hypersonic test, the report said, citing two people familiar with the matter. The latest report said that the missile test “stunned” American military and intelligence officials about the Chinese military advance. It further said that U.S. scientists “were struggling to understand” the hypersonic weapon’s capability, “which the U.S. does not currently possess”.

What is a hypersonic missile?

In the bid to get speed without losing stealth, the hypersonic missile is the latest addition to the list. This missile has the capability to travel at a speed that is five times more than the speed of sound and travel at lower orbit. This combination often will aid the user to maneuver the missile into foreign territories undetected and at a speed that will render the other almost helpless.

What makes a hypersonic missile even more dangerous is its capability to carry nuclear packages. Added to this are the features like lower-orbit traveling ability, the capability to switch track mid-flight, and the unpredictable nature of these missiles of not following the traditional arcs followed by cruise and ballistic missiles makes the hypersonic missile even more dangerous and hard to intercept.

Along with China and the U.S., several other countries are also working on hypersonic technology. Russia and North Korea both claim to have successfully test-launched hypersonic missiles. India, Japan, Australia, France, and Germany are meanwhile in the process of developing such weapons, according to a report published in August by the U.S. Congressional Research Service (CRS).

The CRS report said a number of other states — including Iran, Israel, and South Korea — have also “conducted foundational research on hypersonic airflows and propulsion systems, but may not be pursuing a hypersonic weapons capability at this time.”

China has denied the report that it tested a nuclear-capable hypersonic missile earlier this year, claiming instead that it was carrying out a spacecraft check focused on reusable technology.

“It was not a missile, it was a space vehicle,” ministry spokesman Zhao Lijian told a regular press briefing in Beijing when asked about the newspaper’s report, adding it had been a “routine test” for the purpose of testing technology to reuse the vehicle.

Zhao added that the trial, which the foreign ministry said took place in July, not August, was of “great significance for reducing the use-cost of spacecraft and could provide a convenient and affordable way to make a round trip for mankind’s peaceful use of space.” He claimed that many countries had carried out similar tests in the past.

Changes in the ‘character of war’

Top U.S. General Mark Milley has called China’s recent hypersonic missile test “very close” to a Sputnik moment. The chairman of the Joint Chiefs of Staff in an interview with Bloomberg TV called “the test of a hypersonic weapon system a very significant technological event that occurred.”

“I don’t know if it’s quite a Sputnik moment, but I think it’s very close to that,” he said in the interview, referring to the Soviet Union’s launch of a satellite in 1957 that signified their substantial lead in the so-called “space race” with the U.S. that defined that era. Like the Sputnik launch, analysts have said China’s test could launch a continuing technological race between the superpowers into hyperdrive. Milley added China’s weapons system development was “very concerning.”

Milley said the U.S. is also “clearly experimenting, and testing and developing technologies to include hypersonic, artificial intelligence, robotics — a whole wide range.”

Milley added that China’s technology and weapons capabilities were “expanding rapidly,” and that the U.S. would have to adapt.

“Now, if you take a step back, what we’re in history-wise, we’re in one of the most significant changes in what I call the character of war,” Milley said. “We’re going to have to adjust our military going forward.”