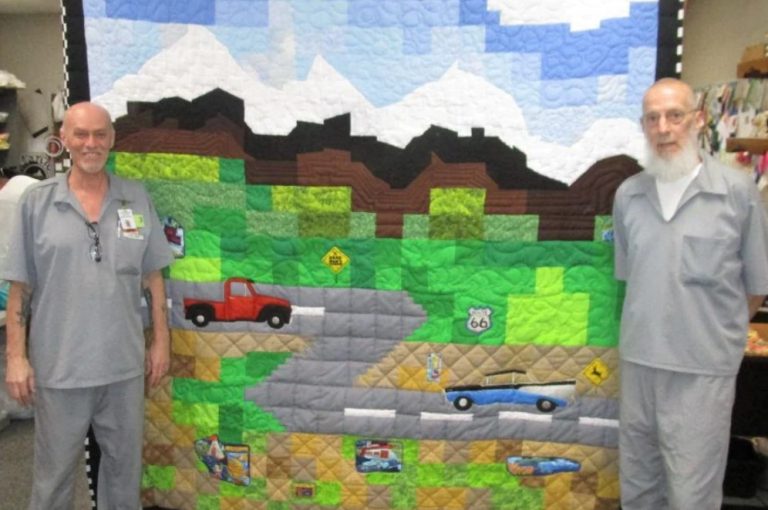 Inmates Richard Sanders, left, and Fred Brown with a Route 66 quilt they finished for a foster child at the South Central Correctional Center in Licking, Mo. (Image: via Joe Satterfield)

In many countries, prison inmates are taught different types of skills and some of them develop proficiency in such skills too. In the South Central Correctional Center in Licking, Moursouri, the prison inmates have developed amazing stitching skills and the output is amazingly good and heart-touching. Inmates Fred Brown, Richard Sanders, Rod Harney, William White, and others are now making personalized quilts for children in foster care.

Brown, who was convicted for charges of armed kidnapping and rape, started sewing 4 years back. He started this after learning about some prison inmates who made quilts for foster home children and charitable entities.

He said: “When I learned that I could help bring a smile to a child’s face, I was all in. Right now, I’m working on a puppy quilt that will go to a 13-year-old boy. I don’t know anything about him, but I have a feeling he’s going to love this quilt.”

Prison inmates have made over 2,000 quilts

The prison inmates have made over 2,000 quilts to date and these have received great reviews. The information was shared by South Central Correction Center case manager Joe Satterfield. The prison quilting circle began about 10 years back as the authorities wanted the inmates to contribute to the community. The prisoners who work in the sewing room can pick from any of the projects.

The quilts made by them go to local charities for auctioning or foster care children in Texas County Missouri. Satterfield said: “They especially love making something for kids who might have nothing. Social service caseworkers in the area provide us with the children’s first names and birthdays, and the guys do the rest.”

The inmates like the sewing work as it enables them to do something for underprivileged children. A lot of these inmates are fathers and they know what it means to make a child happy. Some of them have also grown up at such foster care homes. They can relate to the feeling and feel like doing something for the children. Satterfield thinks the quilt project has made the inmates feel committed to a cause.

William White is among the inmates who have taken to the sewing project. He used to run an upholstery business that was based in St Louis. He saw the inmates working in the sewing room and wanted to do his bit.

He said: “The guys were making these beautiful quilts to give away to foster kids, and I knew it was something I wanted to be a part of. I have six kids, and sewing has always been my passion. And nowhere was a way for me to give back. I don’t need much sleep, and besides, I’d rather be here doing something for a child who needs it. Even though I’m incarcerated, I can still do something beautiful.”

Richard Sanders was given a life sentence for taking part in two murders and a robbery in St. Louis. The sewing project has helped him find new meaning in his life, he says. He was young when he was sentenced and now he is 62 years old. He was a novice at stitching when he began in another Missouri prison. However, he started making uniforms for prison guards.

After getting transferred to South Central some years back, he developed an interest in the sewing project. He says he likes the peaceful ambiance of the sewing room. Sanders has made several hundred quilts. He also shares his ideas with other inmates.

Brown was also taught quilting by Sanders and now he has become a pro. The inmates like Brown take care in making birthday quilts meant for foster care children. They ensure the quilts are finished to perfection.

These instances of inmates making gifts for foster care children prove that humanity still exists even in the minds and hearts of these prison inmates.