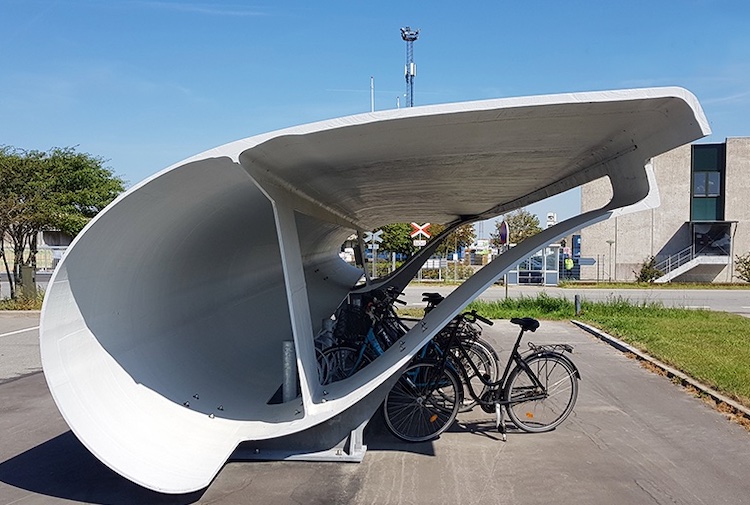 Recycling things goes a long way in reducing carbon emissions and reducing the load on the environment. In Denmark, people have found unique ways to reuse discarded wind turbine blades. In Denmark, wind power has been used to generate energy for years and it’s quite commonplace for tourists to come across a series of huge-sized wind turbines in the country. In fact, wind-derived energy comprises 40 percent of overall energy generated in Denmark now. By 2030, the government wants to take this to 70 percent.

While using wind as the source of energy generation is a green move, one has to think of the related issues too. The wind turbines have non-biodegradable blades and those have an average lifespan of 20 years. After a time, these blades have to be disposed of and that can prove to be a hurdle — given their gigantic size. Denmark has come up with a unique solution — that of using wind turbine blades as bike shelters.

The government in Denmark has appointed a few agencies to deal with wind turbine blades that have reached the end of their expected lifespan. These entities, in turn, have come up with some ingenious plans for reusing the metal blades. Some of them have suggested using the discarded turbine blades as footbridges while others have started using the blades as a shelter for bikes. So far, the discarded turbines had been used in landfills but that can be done in limited ways only. The port of Aalborg already has such a bicycle garage made of wind turbines.

The wind turbine blades are made using a mix of materials like foams, glass fibers, and resins as the blades have to cope with weather elements throughout the year. These substances are non-biodegradable and that poses a hurdle in recycling these. It is estimated that globally almost 40 million tons of wind industry waste materials have to be disposed of. There are groups like the agencies in Denmark that are working to find a solution for the safe recycling of decommissioned wind turbine blades.

The Re-Wind Network has started repurposing some such discarded blades in Denmark. They are also thinking of using these wind turbine blades as unique architectural elements for landscaping.

Georgia Institute of Technology’s Lawrence C. Bank said: “We’re exploring the potential reuse of the blades across architecture and engineering. Developing such methods can have a positive effect on air quality and water quality by decreasing a major source of non-biodegradable waste.”

Some companies are trying to manufacture wind turbine blades in a way so that these can be recycled in the future without hassles. One such venture is Siemens Gamesa.