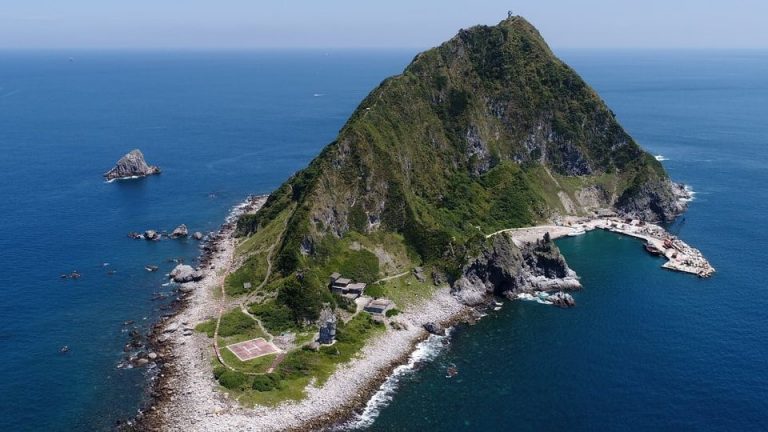 With a graceful parabolic contour, Keelung Islet was once a mysterious islet that looks like a charming whale standing out in the ocean. As one of the eight scenic spots of Keelung City in northern Taiwan, the islet is referred to as “Taiwan Dragon Ball.” It is because the islet seems to be a ball in front of the island of Taiwan, which is regarded as a dragon by local feng shui masters.

Standing in isolation approximately 6 kilometers (3.7 miles) away from Keelung Harbor, Keelung Islet is the most distinctive landmark in northern Taiwan, which can be spotted almost everywhere along the northeast coast.

Keelung Islet is surrounded by cliffs with many amazing sea caves that offer the stunning scenery of the islet.

Keelung Islet used to be a military training base and was not opened to tourism until 2001. It was closed for repairs in 2014 due to the damage caused by a strong typhoon and was reopened in 2019.

The islet is normally opened to tourism in spring and summer, but this year it was opened from March 15 to October 31 and was capped at 1,200 people per day, due to the COVID-19 pandemic.

This amazing volcanic island is only open with guided tours, and visitors should take the ferry boats sanctioned by the city government from the boat dock (小艇碼頭) close to Keelung Railway Station, or Bisha Fishing Port (碧砂漁港).

There are as many as 400 species of native animals and plants on the island, of which seven are endangered species named after Keelung Island, such as Silene fortunei Vis. var. kiruninsularis (基隆蠅子草), Arabis kelung-insularis Ha (基隆筷子芥), etc. Among the most impressive plants on the islet are the Longflower Lily (Easter Lily, 鐵炮百合花), blooming from May to June, and Lycoris aurea (金花石蒜), blossoming from August to September.

The area around Keelung Islet is rich in fish sources, especially Silverfish (Trichiurus lepturus), and squid. It is an important fishing ground in northern Taiwan and is also a famous international rock fishing competition area.

At night, many boats gather around Keelung Islet to fish. It is seemingly a night market on the sea and is another distinctive feature of Keelung Islet.

There are two newly-renovated walking trails on Keelung Islet, one built along the less steep side of the island, and the other winding up to the lighthouse at the peak of the island.

It is pleasant to stroll on the colorful walking trail along the seashore where visitors can appreciate the breathtaking views of the ocean and the adjacent smaller volcanic islets with fascinating contours while listening to the waves on the shore.

The zigzag walking trail leading to the top of the islet has 1,137 plank steps, and it is quite narrow and steep. It usually takes less than one hour to make it to the lighthouse.

Though it is quite strenuous to go up to the top, visitors can explore local flora and fauna while taking in the magnificent views of the Yehliu Peninsula and Keelung Harbor in the distance along the way.

The lighthouse was built in 1980 at the highest point on Keelung Islet to ensure the safety of vessels entering and exiting the Port of Keelung.

Standing 189.3 meters (621 feet) above sea level, and painted in black and white vertical bands, the lighthouse is the first octagonal concrete lighthouse designed by the Taiwanese government. Its nominal light range is as far as 13.8 nautical miles and is the first lighthouse powered by solar energy in Taiwan.

As the lighthouse is situated at the highest point of the islet and is at the end of the walking trail, it is the most popular spot for photography on the islet.