The Immortal Jellyfish Doesn’t Get the Attention It Deserves 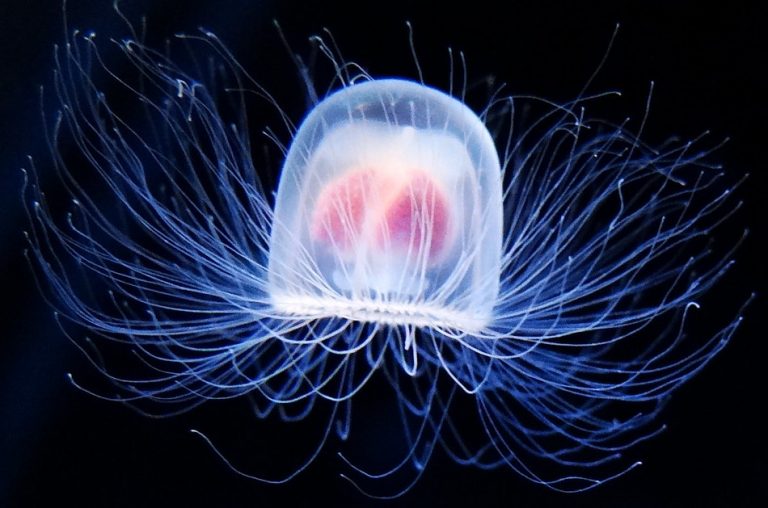 The immortal jellyfish undergoes lifecycle reversal when injured or on the verge of starvation. (Image: muzina_shanghai via Flickr)

Is the “immortal jellyfish” really immortal? The discovery of a jellyfish that can revert to its initial youthful stage over and over again should be good news for the world of research, which has been trying to wrap its head around the question of longevity. Some believe that this little, biologically immortal jellyfish might hold the key to “the fountain of youth.”

The ‘immortal jellyfish’ is found in the Mediterranean Sea and in the waters around Japan.

In an ancient Mesopotamian text called The Epic of Gilgamesh, Gilgamesh visits Utnapishtim with the wish to learn the secret of immortality. Utnapishtim tells Gilgamesh that in order to become immortal, he must find a certain “plant” or “flower” that grows on the sea bed.

More than 4,000 years later in the 1980s, a German marine-biology student made the discovery of his life. Christian Sommer was conducting research on hydrozoans when he discovered a tiny jellyfish, formally known as the Turritopsis dohrnii. Hydrozoans can either look like a jellyfish or a soft coral, depending on what stage of their life cycle they are in.

He was studying many other specimens of hydrozoans he had fished up from the sea when he discovered that the Turritopsis dohrnii was behaving in a way he could not explain. It seemed that while other specimens in the Petri dishes he was examining would age and die after a given time, the Turritopsis dohrnii was growing younger and younger until it reached its earliest stage of development, at which point it began its life cycle again.

Sommer was puzzled about his discovery, but besides his awe, no significant attention was given to the subject. The name “immortal jellyfish” was only given to the Turritopsis dohrnii almost a decade later. In 1996, several scientists in Italy, fascinated by Sommer’s findings, published a paper named Reversing the Life Cycle. The scientists in Genoa described how the species, regardless of the stage of its development, could just turn back the clock on itself and revert to its earliest stage of life — a polyp — thus escaping death, and achieving potential immortality.

With the discovery of the immortal jellyfish, the axiom “all life is born and has to die” might have suffered a serious crack. Unfortunately, the news of an immortal jellyfish and the paper Reversing the Life Cycle never found any significant attention outside the academic world.

Many have posed the philosophical question of whether humans would benefit from immortality or not, and what the consequences would be in our current state. Would it help us better understand who we are and where we are going, feed the hungry, or would it make wars unnecessary?