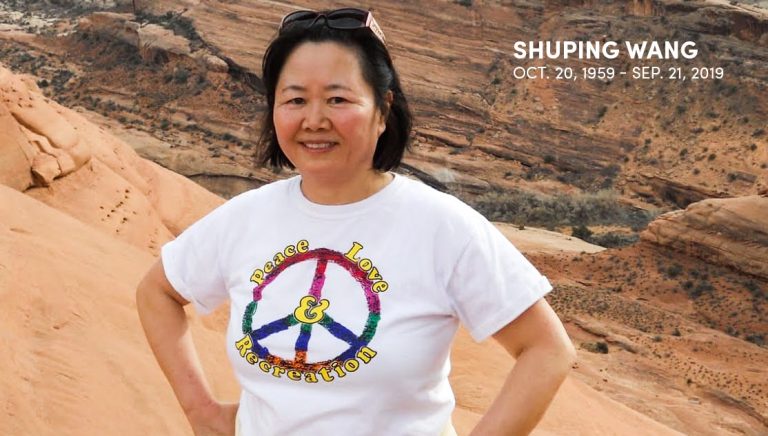 Shuping Wang was the whistleblower who exposed the Henan AIDS disaster more than 20 years ago. (Image: via University of Utah School of Medicine)

On September 21, 2019, a 59-year-old Chinese woman died of a heart attack in a hospital in Utah. Her name was Shuping Wang. Before coming to America, she was a doctor in Henan, China.

Shuping Wang was also the whistleblower who exposed the Henan AIDS epidemic more than 20 years ago. She exposed dangerous practices in Henan’s booming blood-selling economy where there were very low standards of hygiene and no testing for AIDS, HIV, or hepatitis. As a result of her whistleblowing, Wang lost her job, her marriage, and her happiness. In 2001, after losing everything, Wang left her children behind and moved to the United States alone, where she remained for the rest of her life.

Her determination and bravery to expose the truth saved countless lives. A month before her death, she told her friends: “I didn’t think about what would become of me back then, I just wanted to save people,”

Shuping Wang was 31 years old in 1991, living a peaceful life with a happy family. She had everything she wanted in life — a satisfying job and a beautiful family. But something was about to completely change her life and bring trouble into her calm existence.

Shuping Wang worked at a blood collecting station under the Health Bureau at Zhoukou District, Henan Province. She soon came to realize there was a terrible loophole in the blood-selling economy that was flourishing in Henan. HIV and hepatitis carriers sold their blood. But there was no testing and no measures in place to prevent contamination and cross-infection at the collection sites. The contaminated blood products infected more and more innocent people. Shuping Wang was horrified and she knew she had to do something to stop it.

What was even more frightening was the fact that there were many of these collection points operating with no regard to correct sanitation and hygiene procedures. An accountant, two nurses, a few syringes, and a bottle of alcohol for sterilization are all that was needed to set up one of these blood collection stations. The stations themselves became a public health hazard.

Due to the easily made high profits, these “black blood spots” sprang up like bamboo shoots after it rains. According to one survey, in 1993, there were 33 in the Zhumadian District alone.

The economy in Zhoukou in 1991 was still underdeveloped. Many villagers in urgent need of money sold their blood to make ends meet. This was a widespread practice at the time.

Regardless of whether it was a government-run or an illegal blood collection station, all of the collected blood was mixed, after which the plasma and red blood cells were separated. The red blood cells were then transfused back to the blood donors to speed up their recovery time so they could donate blood again. Many people sold their blood to survive, but they had no idea about the risk of infection from the process.

Shuping Wang understood that many thousands of people would be at risk of death if these practices were allowed to continue. She set up a clinical testing center that was affiliated with the Health Bureau and had government funding. The clinic’s purpose was to screen blood samples and track blood donors. She soon made a terrifying discovery: one person carrying HIV had donated at four different blood stations.

She sent a detailed report to the local authorities, warning of the danger this posed to the community. She asked that the blood stations screen samples for HIV and hepatitis. The response she received was shocking in the extreme — she was told that introducing screening procedures would be too costly and there was no money to do so.

She did not give up and continued her work, testing samples and tracking donors. Out of 400 random blood samples, she found that the HIV infection rate was approximately 13 percent. The problem was growing before her eyes and she spent many sleepless nights thinking about how to stop it. But Wang was only a small potato in the health industry and had no power to change things.

In December 1995, a determined Shuping Wang wrote a detailed report listing all of the terrible practices and the devastating consequences if it wasn’t stopped. She sent it to the Zhoukou District Health Bureau. Once again, she was told there was nothing that could be done. She realized that although these health department bureaucrats were alive, their consciences had died long ago.

The following year, she realized she couldn’t sit by and leave people at risk any longer. She went over the heads of the local authorities and submitted her report and test data directly to the Ministry of Health in Beijing.

The authorities were very upset with Wang for reporting on the situation. They sacked her and her husband too, as he also worked for the health department. He blamed her for their loss of employment and they eventually divorced. She blew the whistle, trying to save people’s lives, and they bore the consequences alone.

The following year, her whistleblowing finally bore fruit. Someone in the upper echelons of the health department who still had a conscience conducted a full investigation into the matter. This eventuated in all blood stations closing until proper hygiene and screening procedures could be implemented across the board.

Despite receiving no support for her work in China, Wang’s story was becoming known in other countries. A playwright in London wrote a play called The King of Hell’s Palace that was based on the blood-selling economy in Henan Province and used Wang’s research and the consequences she had suffered as its source material. The CCP was terrified that word of their uncaring incompetence would get out and tried to stop the show from being performed, but the team was determined it would go ahead.

The play was performed for the first time on September 5, 1999. Wang flew to London and attended a press conference with the play’s production team on September 12. She happily posed for photos with the playwright. It was a very proud moment for her.

In 2001, with nothing left for her in China, Wang moved to the U.S. by herself. Her English name was Sunshine, as she was a happy, sunny, optimistic, and moral person. She soon had a lot of friends and was surrounded by love. She eventually married Gary Christensen and they settled in Salt Lake City where Wang became a researcher at the University of Utah.

That same year, the AIDS crisis in central China was recognized by the authorities. At least 10,000 people were infected with HIV as a result of the bad practices at blood stations. The government eventually built a special hospital devoted to treating those with HIV.

Despite having no history of heart problems, Wang passed away after suffering a heart attack on September 21, 2019.

Everyone should know and remember the name Shuping Wang. Her good heart and unending perseverance saved countless people from suffering and death. She is a true hero who deserves an honored place in history.