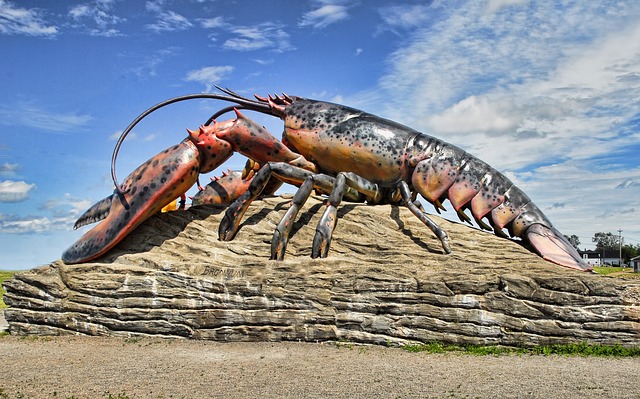 There appears to be yet another theory propagated by the Chinese government regarding the supposed origin of COVID-19; this time, its Maine lobsters — picture shows a perfect fake lobster — the beautiful Brunswick icon Shediac Lobster Canada. (Image: via Max Pixel)

There appears to be yet another theory propagated by the Chinese government regarding the supposed origin of COVID-19; this time, it’s Maine lobsters. The new theory of the coronavirus origin is being spread by Chinese state media and diplomats online. The discovery has been made by a disinformation researcher from the University of Oxford named Marcel Schliebs.

Zha Liyou, who serves as the Chinese consul general for India, said the dreaded virus causing the pandemic was triggered by lobsters imported from Maine. This is akin to blaming the U.S. for spreading the virus.

According to this new theory, Maine lobsters were imported into China and they reached the Wuhan market. The market is generally said to be the epicenter of the pandemic. The Maine lobsters came to the seafood market located in Wuhan City in late 2019, according to the claim. It is yet another of the pro-China theories about the source of the virus.

Schliebs got curious about the development and decided to dig deeper, and what came out was quite revealing. A hidden network of over 550 Twitter users was found and the users were spreading the same theory on the web. A message was being translated into several languages by those users and it was being shared across the web randomly.

Schliebs said some of these accounts had very little to no followers. Some accounts were real, but got hijacked somehow. Schliebs said: “Attribution is really difficult. But we can see there’s a coordinated effort, and that it’s a pro-Chinese narrative.”

Previously, Chinese media outlets have said repeatedly that the virus might have spread from frozen-food imports. Alliance for Securing Democracy’s information manipulation team leader Bret Schafer said on this: “This is the third or fourth major different redirection Chinese officials have gone in to try and somehow pin the COVID outbreak on the U.S. It looks crude and not sophisticated when you look at individual accounts. But these kinds of networks are designed to try and get topics to trend on social media. Whether or not anyone is buying into a lobster or Fort Detrick being the source of COVID, it’s at least having the effect of muddying the truth and confusing people.”

Schliebs did not sit idle after the discovery. He shared a spreadsheet of the fake accounts with Twitter. The social media platform reverted saying it checked the accounts and then suspended them following its usage and spam policy.

Marco Bilello, a Twitter spokesperson agreed, saying: “Our top priority is keeping people safe, and we remain vigilant about coordinated activity on our service. Using both technology and human review, we proactively and routinely tackle attempts at platform manipulation and mitigate them at scale by actioning millions of accounts each week for violating our policies in this area.” However, it has not yet been said that the accounts were used by individuals working for government departments in China.

It is relieving that Schliebs’ team was able to trace the network quite fast and Twitter sprang into action after being alerted. This indicates the online network was not very large. The network was stopped in its growing stage.

Although the theory linking coronavirus to lobsters procured from Maine is not true, it may hurt U.S.-China trade relations further, which have remained strained for the last 2 years. U.S. lobster exports to Asian countries like China took a hit in 2019, following steps taken by then-U.S. President Donald Trump and eased a bit in 2020. However, this discovery may impact seafood exports to China adversely, again.

The suppliers of Maine lobsters have also lambasted the new Chinese theory linking the seafood to the virus. Maine Coast, a wholesale supplier of Maine lobsters, refuted the claim saying the business has not been hampered by these reports.

Chinese officials have floated numerous unfounded theories regarding the source of the coronavirus and we probably won’t have to wait long before they roll out the next one to everyone’s amusement.