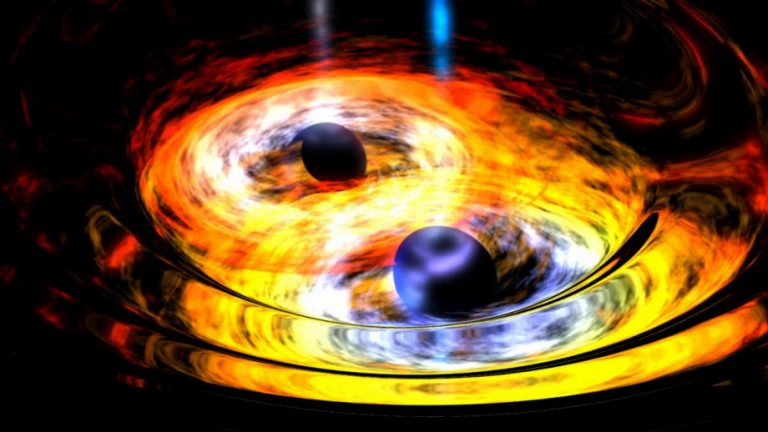 Two black holes merge to become one. (Image: via NASA)

A team of international scientists, including researchers from The Australian National University (ANU), have unveiled the largest number of gravitational waves ever detected. The discoveries will help solve some of the most complex mysteries of the Universe, including the building blocks of matter and the workings of space and time.

The global team’s study, published on ArXiv, made 35 new detections of gravitational waves caused by pairs of black holes merging or neutron stars and black holes smashing together, using the LIGO and Virgo observatories between November 2019 and March 2020.

This brings the total number of detections to 90 after three observing runs between 2015 and 2020. The new detections are from massive cosmic events, most of them billions of light-years away, which hurl ripples through space-time. They include 32 black hole pairs merging, and likely three collisions between neutron stars and black holes.

ANU is one of the key players in the international team making the observations and developing the sophisticated technology to hunt down elusive gravitational waves across the vast expanse of the Universe. Distinguished Professor Susan Scott, from the ANU Centre for Gravitational Astrophysics, said the latest discoveries represented “a tsunami” and were a “major leap forward in our quest to unlock the secrets of the Universe’s evolution,” Scott added:

“These discoveries represent a tenfold increase in the number of gravitational waves detected by LIGO and Virgo since they started observing. We’ve detected 35 events. That’s massive! In contrast, we made three detections in our first observing run, which lasted four months in 2015-16.

“This really is a new era for gravitational wave detections and the growing population of discoveries is revealing so much information about the life and death of stars throughout the Universe. Looking at the masses and spins of the black holes in these binary systems indicates how these systems got together in the first place.

“It also raises some really fascinating questions. For example, did the system originally form with two stars that went through their life cycles together and eventually became black holes? Or were the two black holes thrust together in a very dense dynamical environment such as at the centre of a galaxy?”

Scott, who is also a Chief Investigator of the ARC Centre of Excellence for Gravitational Wave Discovery (OzGrav), said the continual improvement of gravitational wave detector sensitivity was helping drive an increase in detections, adding:

“This new technology is allowing us to observe more gravitational waves than ever before. We are also probing the two black hole mass gap regions and providing more tests of Einstein’s theory of general relativity.

“The other really exciting thing about the constant improvement of the sensitivity of the gravitational wave detectors is that this will then bring into play a whole new range of sources of gravitational waves, some of which will be unexpected.”