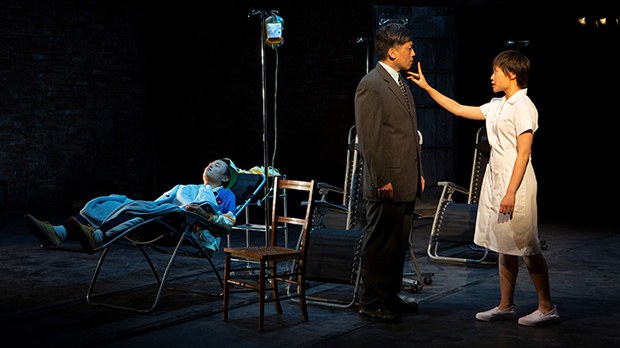 The true story of a blood disaster originating from an “AIDS village” in Henan, China, 24 years ago was brought to the stage in London, England, on September 5, 2019. The play was based on the experiences of former Chinese doctor Wang Shuping. Wang exposed the officials who covered up the epidemic in the village of Welou and their retaliation against her as a whistleblower. The Chinese Communist Party (CCP) was upset by the play and urged Wang to halt the performance, but Wang refused. On the eve of the play’s debut, Chinese officials harassed Wang’s family and friends in China, attempting to stop the performance.

The play titled The King of Hell’s Palace was staged at the Hampstead Theatre in London. On the stage, characters lying in the chairs discussed the slogan “Donating blood is glorious, heal the wounded and rescue the dying” while sad music played. This scene was not just a stage play, but a real-life story that caused a blood disaster in Henan Province, China, 24 years ago.

What was the blood disaster in Henan?

During the peak of the epidemic from the late 1980s to the early 1990s, the CCP banned importing blood products to prevent the disease. To meet the needs of China’s blood demand, the Chinese government implemented a new blood collection model. But at the time, the Chinese blood products industry was in an infancy stage and lacked proper protocols for blood collection and processing. As a result, both government and privately-run blood collection sites mixed all the blood. After separating the plasma and the red blood cells, the red blood cells were transfused back to the “donors” to expedite recovery so they could “donate” blood again.

Frances Ya-Chu Cowhig’s father was a retired American diplomat. Because of his work, he met Wang Shuping, who exposed the local authority’s cover-up and the root cause of the spread of AIDS. Cowhig wanted to share her growing-up experience in China and Wang Shuping’s story. She told Radio Free Asia that her family background had a significant influence on her work.

Cowhig said: “In addition to being a diplomat’s child, I am also a mixed-child. My father is a Bostonian of Catholic Irish descent; my mother was from rural Taiwan. As a result, I have always been interested in exploring the world, especially in how different social systems affect people’s interactions.”

Wenlou Village’s blood “donation” model sounds terrifying today, but it was the hottest plasma economy in 1995. The business of selling blood for 50 yuan (about US$7) was a shortcut for poor farmers to make fast money. But they didn’t expect that they could be infected with AIDS and even lose their lives. When victims and their families tried to petition the government for justice, authorities put them in jail to silence them.

For Cowhig, artistic creation must reflect the reality of society, good or bad. She has adapted Dou E’s Injustice into Snow in Midsummer and created The World of Extreme Happiness, which focused on the lives of Chinese migrant workers. She said The King of Hell’s Palace was the third part of a Chinese trilogy she planned to complete in 10 years. And it concerns humanity deeply.

Cowhig said: “A bigger theme is to focus on the issue of global capitalism and transnational labor. This play is also a continuation of this theme because it is about how the Chinese government and enterprises exploit people’s blood, especially the blood of the poor Chinese people, to make a profit.”

For Beijing, airing the dirty laundry of the Chinese government on stage is embarrassing, while for Wang Shuping, the experience of intimidation and coercion by the authorities happened all over again.

Wang Shuping gave a statement to Radio Free Asia on August 22 before the show. She said that the Ministry of State Security of China summoned her family and friends in China and even tried to contact Wang’s daughter in the United States. Chinese officials demanded Wang’s family halt the play because it would embarrass and hurt the reputation of the Chinese government and certain officials.

Wang Shuping said that intimidation would not silence her. Despite being an American citizen, she still believed in her responsibility to protect the vulnerable and helpless Chinese people. She hoped that she could help doctors who were still struggling in China to avoid official oppression through this play.

Chinese human rights activist Wan Yanhai, who was also concerned about the manmade disaster of the AIDS epidemic in Henan back in the day, has moved to the United States. He told Radio Free Asia that keeping records of the event in any form was an inspiration to him.

According to the data from the United Nations Agency for AIDS (UNAIDS), as of 2018, 860,000 people were infected in China, of which 720,000 people had received antiretroviral therapy (ART).

Chinese officials have consistently emphasized that the prevention and treatment of AIDS had been brought under control. Some domestic media also covered the blood disaster in Henan, but the government never held officials accountable for the disaster.

The 2.5-hour performance of The King of Hell’s Palace hoped to leave a historical record. Peng Liyuan, the wife of China’s leader Xi Jinping, is China’s most famous goodwill ambassador for AIDS prevention and treatment, who once spoke for AIDS babies. So let the people tell their stories to prevent the same mistake from happening again. Why should China fear this Chinese story appearing on stage?