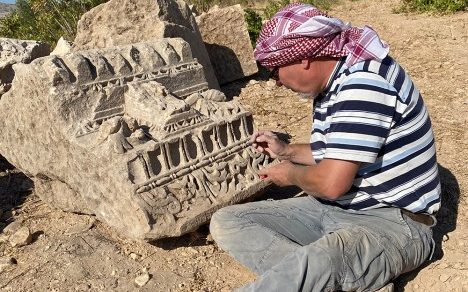 Last summer, archaeologists from the University of Münster discovered a previously unknown sanctuary from the Roman era during excavation work in the ancient town of Doliche in southeastern Turkey. Over a period of nine weeks, the team — headed by Prof. Engelbert Winter and Prof. Michael Blömer from the Asia Minor Research Centre — uncovered parts of a large ancient temple notable not only for its size, but also for its unusual form. The find is of great importance for understanding the development of temple architecture in antiquity in the Middle East.

Before excavation work began, there was little to indicate the existence of a large ancient building on this site. There were no traces of antique architecture recognizable on the gently sloping, vine-covered field. Even before the campaign started, however, measurements taken by means of ground penetration radar — which makes subterranean structures visible — had provided indications of sections of wall hidden below the surface. Their dimensions also revealed that they were part of the public space in the ancient town. Excavations confirmed the researchers’ suspicions.

As far as can be ascertained so far, in the center of the field is an east-west oriented ancient temple with a width of about 35 meters. On the west side, its interior concludes with an apse, a semi-circular space, which is about 12 meters wide. The laterally adjacent areas have not yet been fully examined. The researchers assume that small side rooms are attached to them that would have been accessed from the apse. Excavation director Engelbert Winter said:

“Despite the high level of destruction through subsequent use and pillaging, the uncovered remains give a good impression of its monumentality. Also, numerous fragments of capitals and beams of substantial size already allow us to reconstruct very precisely the building’s structure.”

Ancient temple is unconventional in its design

The study of the ancient temple is still at an early stage, say the Münster researchers. However, what is already becoming clear to the archaeologists after initial assessments is that the ancient temple differs from the usual temple buildings in the eastern Mediterranean through the unconventional design of its interior with a large apse. It is not alone in this, however. There are parallels in Palmyra and in southern Syria. Blömer said:

“All in all, the building promises to deliver new information about the development of temple architecture in ancient Syria.”

The team doesn’t yet know, however, who was worshipped in this newly discovered temple. For that, further research will be required in the coming years. In the researchers’ view, however, it is possible that it could be a site of a Roman emperor cult.

The discovery underlines the fact that Doliche is a place where religious developments in the Middle East of antiquity can be studied particularly well. In the past, the Münster team already uncovered the sanctuary of Jupiter Dolichenus outside the town, a subterranean sanctuary of the god Mithras and a large early Christian basilica dating from the 4th century CE.

In the coming weeks, the researchers will be preparing the publication of their findings for other specialists. To this end, one of the things they have done is start their own series of books devoted to the results of the excavation; the first volume will appear in spring 2022.

Provided by: Westfälische Wilhelms-Universität Münster [Note: Materials may be edited for content and length.]