See How Mars Is Slowly Destroying Its Moon Phobos 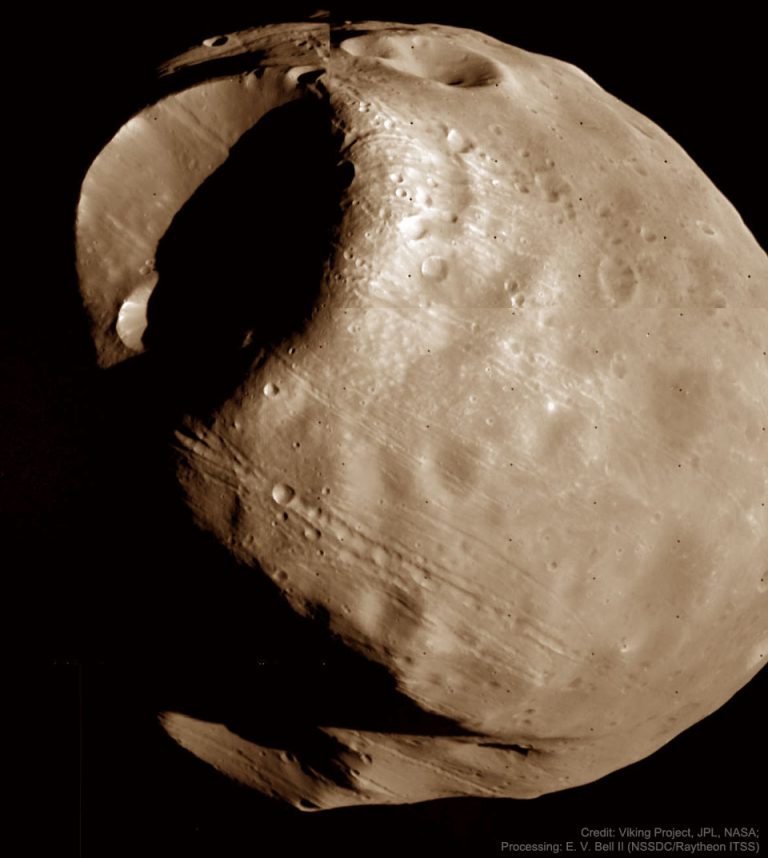 Mars, the red planet named for the has two tiny moons, Phobos and Deimos. The origin of the Martian moons is unknown, though, with a leading hypothesis holding that they are captured asteroids. The larger moon, at 25-kilometers across, is Phobos, and is indeed seen to be a cratered, asteroid-like object in this false-colored image mosaic taken by the robotic Viking 1 mission in 1978. (Image: via NASA / JPL)

It has been known for some time now that Mars’ largest moon, Phobos, has been moving toward its parent planet, the victim of Mars’ gravity. But researchers have discovered that the moon has already started to fall apart.

There are indications that the long, shallow grooves on the surface of Phobos, once thought to be impact fractures, are the early signs of structural failure that will eventually destroy the moon.

“Scientists now believe the moon will be destroyed in 30 to 50 million years.”

Terry Hurford of NASA’s Goddard Space Flight Center said at the annual meeting of the Division of Planetary Sciences of the American Astronomical Society: “We think that Phobos has already started to fail, and the first sign of this failure is the production of these grooves.”

The moon orbits closer to its planet than any other moon in the solar system, at just 3,700 miles (6,000 kilometers) above the surface. Because it is so close to Mars, its gravity has a larger effect on it, pulling it by around 6.6 feet (2 meters) every hundred years.

Scientists had initially believed the grooves on Phobos were fractures caused by an impact that had formed the Stickney crater. The collision was so powerful it almost shattered Phobos. Researchers had even proposed the grooves may have been produced by many smaller impacts of material ejected from Mars.

However, scientists have now determined the grooves don’t move outward from the crater itself, but from a point nearby. The new modeling conducted by Hurford and colleagues, shows the grooves are more like “stretch marks” that occur when Phobos gets deformed by tidal forces, NASA wrote.

The tidal forces are produced by the gravitational pull between Mars and Phobos, much the same way Earth and our Moon interact with each other, producing tides in the oceans, and it’s why the Earth and Moon are slightly egg-shaped.

After the Viking spacecraft sent images of Phobos back to Earth decades ago, scientists proposed that tidal forces could have caused the grooves. But at the time, it was assumed that Phobos was almost solid all the way through. This meant that when the tidal forces were calculated, it had shown they were not strong enough to fracture a solid moon of that size.

Get some more info on Phobos with Fraser Cain:

Now, scientists think the interior of Phobos may be a rubble pile that is just holding together and is surrounded by a layer of powdery regolith around 330 feet (100 meters) thick; when working out tidal forces, this makes all the difference.

Erik Asphaug of the School of Earth and Space Exploration at Arizona State University in Tempe and a co-investigator on the study said: “The funny thing about the result is that it shows Phobos has a kind of mildly cohesive outer fabric.”

“This makes sense when you think about powdery materials in microgravity, but it’s quite non-intuitive.”

If Phobos has an interior like this, it could easily distort, as it would have very little strength and would force the outer layer to re-adjust. Researchers think the outer layer behaves elastically and builds stress, but it’s weak enough that these stresses can cause it to fail, NASA said on its web page.

The tidal forces acting on Phobos could produce more than enough stress to fracture its surface. The stress fractures that are predicted by the new model closely line up with the grooves seen on Phobos. It also explains why some grooves are younger than others, which would happen if the process that creates them is ongoing.

Like Phobos, Neptune’s moon Triton is also falling inward, has a similarly fractured surface, and is likely to suffer the same fate. According to researchers, the work also has implications for extra-solar-planets.

“We can’t image those distant planets to see what’s going on, but this work can help us understand those systems because any kind of planet falling into its host star could get torn apart in the same way,” said Hurford.