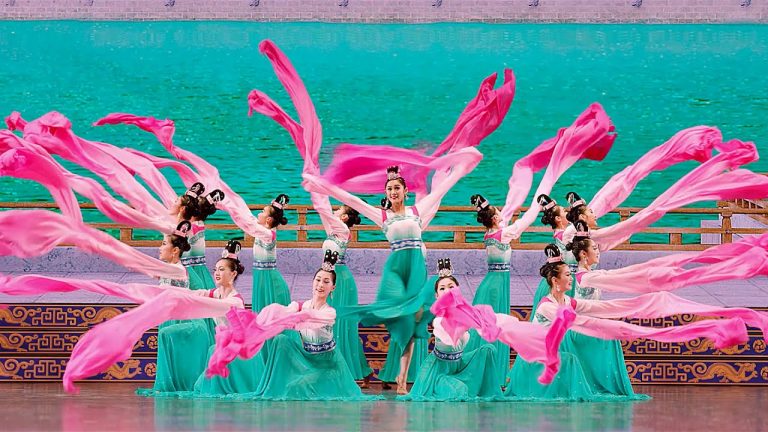 Shen Yun brings the ancient myths and legends to life on stage; introducing the essence of Chinese culture to the audiences. (Image: via Shen Yun Performing Arts)

Its mission is to revive traditional Chinese culture, which is on the brink of extinction since the Cultural Revolution took place in China.

Shen Yun brings the ancient myths and legends to life on stage; introducing the essence of Chinese culture to the audiences. The name Shen Yun translates roughly to “beauty, magic, or divine dancers.”

The show consists of a live orchestra with a unique blend of both Western and Eastern instruments. Traditional Chinese instruments such as the 4,000-year-old erhu, the pipa, Chinese flute, and gong. The Shen Yun Symphony Orchestra alone has played in venues such as Carnegie Hall, the Kennedy Center, and other celebrated venues.

“We use the most traditional singing method — it’s the same as the one classic Italian opera used in the past. It’s different from the bel canto you hear today, which has diverged from its earliest form.

“Our Artistic Director is a master of this traditional bel canto technique that had previously been lost. He trains us in this authentic operatic singing method, and so we can bring it back to the stage, and share this lost art with everyone.”

The striking digital backdrops dazzle us with scenes from the natural world such as snow-capped Himalayan mountains, the shores of a Dai village, the vibrant greens from Mongolian plains, along with sacred halls and ancient temples. China has over 20 dynasties and more than 50 ethnic groups.

There are hundreds of beautifully handmade costumes, and each year — with completely new performances — this wardrobe gets recycled and hand-stitched into the wardrobe for the following year’s show. Shen Yun thinks green and travels green. Read the full article, Going Green with Shen Yun, to find out how.

For me, the real goldmine lies in the stories infused in the dances. Whether it is a dance about a sacred flower that blooms only once every 3,000 years, a glimpse back into the Han Dynasty, Journey to the West, a classic story from Chinese literature, an epic poem about the legendary warrior woman Mulan, an emperors visit the moon, right up to events in modern-day China.

After a glimpse into the 5,000 years of a lost civilization, when you experience the tremendous amount of energy put into the show, it leaves you energized, uplifted, and full of hope.

The group is based in New York with four groups of 100 artists that tour over 100 cities worldwide.

It’s a 2.5-hour show where you can step back in time to experience a 5,000-year-old divine culture. It’s quite an experience. Let me put it this way, if you have the choice between this show for one evening or a full weekend at a spa retreat, I would see this show. The spa retreat may sort out your body, but Shen Yun will nurture your soul.