Spain’s Annual Sheep Migration on the Streets of Madrid 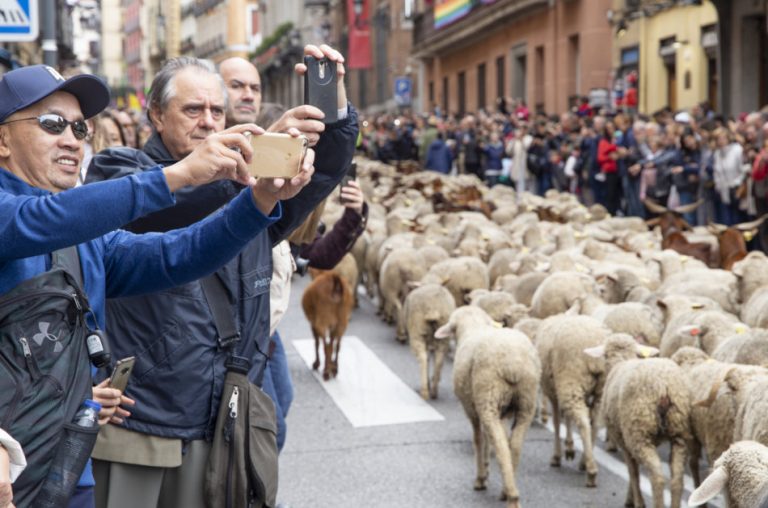 Flocks of sheep are herded through Madrid every year for Fiesta de la Trashumanica. (Image: Maria Sanz via Dreamstime)

Being the capital city of Spain, Madrid is known for its rich and diverse cultural heritage. From its famous tourist spots to historic sites and awesome cuisine, tourists have many things to experience and explore. However, those with an interest in wildlife and animals think the annual sheep migration through Madrid is among the top attractions. This is a yearly event, and on a special day, the streets of Madrid are filled with flocks of sheep. The clanking of bells replaces the bustle of traffic on the city roads for a long time. The flocks of sheep of varying sizes and hues are led by the shepherds through the major and arterial roads of the Spanish capital, as per the custom.

The sheep migration is an event the locals are excited about too. They line up along the route to cheer the animals and their owners. Owing to the COVID-19 pandemic, the event was canceled in 2020. It started in 1994. In the ancient ages, the shepherds used traditional routes to take their livestock from northern Spain for winter grazing to southerly pastures. However, they traverse the busy city streets now. It takes place in late October, usually on a Sunday.

The sheep migration is actually a visually enticing event. The sheep walk with jangling neck bells and the shepherds wear traditional clothing, playing folk music and dancing while guiding the animals. The sheep are accompanied by a handful of goats and guard dogs too. The children in the city enjoy watching the event more than the adults. It is not every day they get to see the animals up close and they are within touching distance, too! They also get to witness the agricultural and pastoral traditions instead of traffic jams. They also like to snap images and some shout in excitement as the sheep walk past.

The event in Spanish is known as Fiesta de la Trashumancia. The shepherds make a halt at the city hall where they pay the mayor’s toll, as per custom. Even the rate is still what was set in 1418. In medieval times, the migration was arranged twice every year and now it is an annual event.

The shepherds are quite proud and upbeat about taking part in the traditional yearly event. Shepherd Miguel Gonzalez, in his early 50s, says: “We are reclaiming the Royal cattle routes that are old paths that were used to take cattle across Spain. From Castilla Leon to Extremadura and even down to Andalucia. They were paths where the cattle were taken. This is what the Royal cattle routes are. So we come here to Madrid every year to do the festivity of the migration and we like to come and support it.”