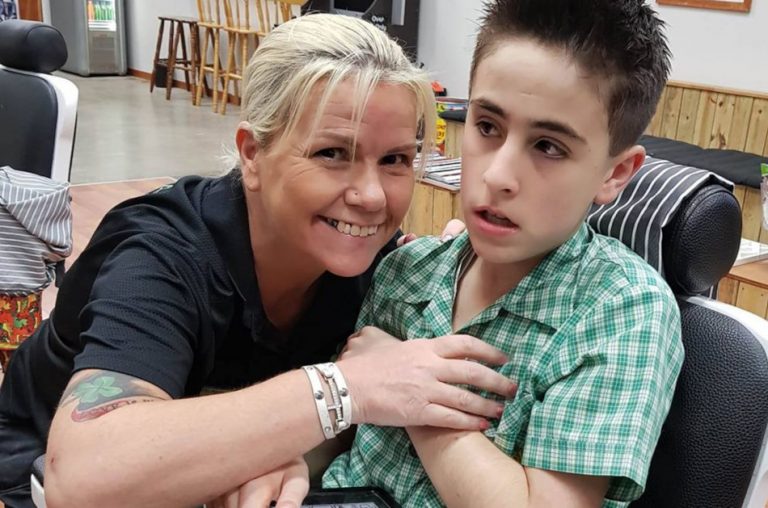 Dealing with children coping with autism can be quite tough. Their parents can manage things a tad better, but for others, it can be quite challenging. For an Australian barber, cutting the hair of an autistic boy proved to be very difficult. Whenever Lisa Ann McKenzie tried to cut his hair, Jordie Rowlands became agitated and wanted to run away. However, after many efforts, she tasted success. McKenzie has been working as a barber for over 3 decades and she eventually found a way.

She said: “I felt that I’d failed, and it made me want to do better. It made me want to learn more about autism so I could connect with him and take away his fear.” Jordie was the first autistic child she had dealt with.

After the first unsuccessful attempt, she asked Jordie’s parents to bring the autistic boy back every fortnight, at closing time. McKenzie found it hard, but she did not give up. She added: “I’d cut just a little bit, he’d run around the shop. His hair was long. I could never cut it properly. I’d get a couple of snips in, and then he’d just flip. That was a really tough time. But I knew we had to just keep going.” She even tried giving him a haircut at his home, but that did not yield any better results.

McKenzie received flak from the barbershop owner for this and she left to start her own shop. Her compassion made her determined to help these kids. McKenzie has 4 kids and instinct helped her. She was trying various things to calm down the autistic child. However, she found a solution unexpectedly. She was singing The Wheels on the Bus and found out the autistic boy liked listening to nursery rhymes. It produced a calming effect and there was no looking back. She gave him a proper haircut then. Naturally, his parents were happy. The effect was so intense that all of them were crying, but it was tears of joy.

After her experience and success with Jordie, McKenzie became determined to cater to more kids coping with autism. She started cutting the hair of kids with special needs with success. She trained her staff to cater to these kids too. She has catered to almost 100 special needs customers up till now. McKenzie did not focus much on the income aspect when catering to Jordie. She did not charge the family when they came every time before she found a breakthrough. She said: “It’s not always about the dollar. To me, this is the cornerstone of a barbershop, making connections with people. If you connect with people, your business will survive long after you’re here.”

The efforts of the barber have paid off, for sure, she says. Jordie now feels at ease when he gets a haircut. Now, giving the boy a proper haircut does not take multiple attempts and he even gives her hugs. McKenzie posted her achievement on Facebook and the results were quite impressive. This led to her getting approached by parents of kids with different kinds of disabilities. The success has prompted McKenzie to keep one Sunday a month where she only does kids with special needs.