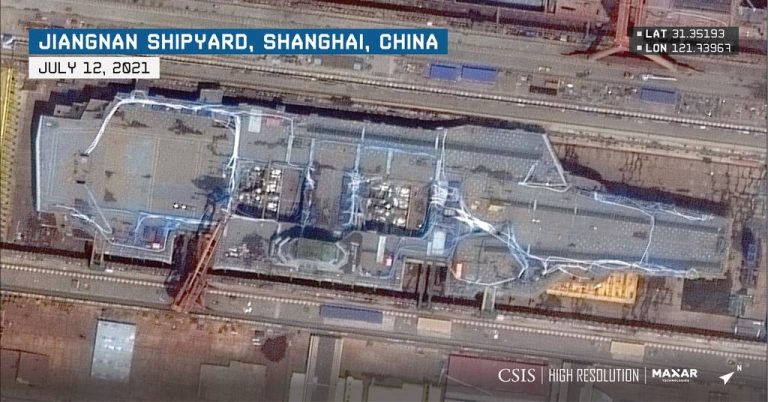 The upcoming aircraft carrier may be on par with its U.S. counterparts. The news has been revealed by a think tank based in Washington, the Center for Strategic and Internal Studies (CSIS), which provided satellite images that show a carrier, known by the title Type 003, is undergoing final construction at Shanghai’s Jiangnan shipyard.

According to the images obtained by CSIS, the carrier is near completion and it has already been equipped with power plants and an advanced aircraft launching system. The major components are in place. A few parts such as the weapon systems and radar are yet to be set up on it. CSIS thinks China will launch the advanced vessel within 6 months or less.

This is going to be the third Chinese aircraft carrier. The previous two carriers, namely the Type 001 Liaoning and Type 002 Shandong, are quite powerful, but the upcoming Type 003 will be laden with more advanced firepower and technologies. It will be capable of launching various types of fighter aircraft.

China now has the largest naval force globally. The addition of a powerful and high-tech aircraft carrier will only help in enhancing its image and position. The aircraft carriers not only help the country in staving off threats from its waters, but they also serve as means to boost diplomatic prestige.

CSIS’s China Project’s senior fellow Matthew Funaiole said: “This is a pretty significant step forward. They’ve really committed to building out a carrier program, and they continue to push the boundaries of what they’re able to do. China wants to have a world-class navy. It wants to signal to the world that it has a world-class navy, (and) try to convince nations around the region or around the world that it is on par with the United States.”

China’s first aircraft carrier named the Liaoning was not made domestically. It was bought by Beijing from Ukraine back in 1998. It was commissioned in 2012. The Chinese military however utilized the technological knowledge it obtained from that vessel to manufacture the second aircraft carrier, the Shandong. The latter was pressed into service in late 2019.

While these two aircraft carriers helped in boosting the naval might of China, it was still much behind the U.S., which has 20 carriers in active service, including the advanced Ford-class ships, the first new U.S. aircraft carrier design in over 40 years. In contrast, both former Chinese aircraft carriers were based on old Soviet technology. The addition of a third vessel represents an advancement over the old Soviet designs.

China’s upcoming third aircraft carrier will have an embedded advanced steam catapult system for launching aircraft, much like the U.S. Nimitz-class counterpart, which allows the launching of various types of aircraft. However, the new U.S. Ford-class ships employ a newly advanced electromagnetic launch system.

Funaiole however said that the U.S. carriers still outshine the Chinese carrier as these have more catapults, bigger airways, and many more elevators in place. Besides, the U.S. aircraft carriers are nuclear-power driven while the Type 003 is likely to be driven by diesel propulsion. The U.S. also has the experience of launching some 80 aircraft carriers since the 1920s.

Funaiole added: “We’ve been at carrier operations for generations on generations and we have a number of different operators and engineers and technicians that have worked on them, that can pass that knowledge on to those who come after them.” Contrary to that, China got on the bandwagon in 2012. The experience gap is too big to fulfill just by adding more weapons and vessels.

While China may launch the Type 003 aircraft carrier in 2022, it will be 2023 or 2024 before it will conclude its sea trials and be certified for active service. This view is supported by the U.S. Department of Defense. The older Shandong aircraft carrier was launched in 2017, but it wasn’t until late 2019 that the Chinese government finally put it into service.

The latest Type 003 ship will also need advanced aircraft and well-trained crews to fully utilize its technologies, something that the U.S. has spent almost 100 years perfecting.