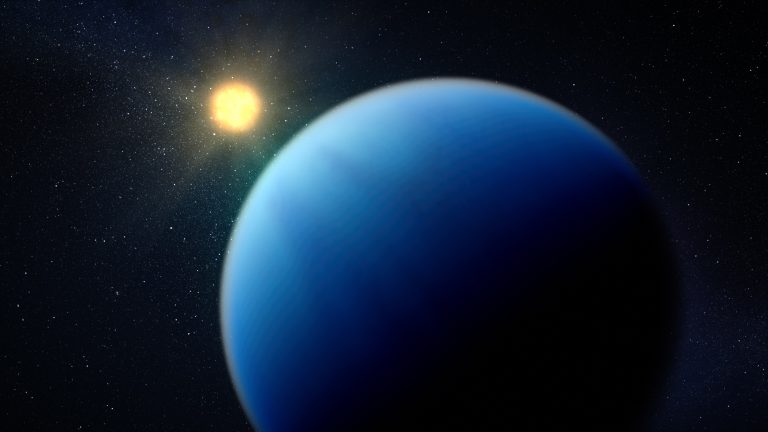 Detailed atmospheric studies will provide key insights into some of the most common – and mysterious – planets known in the galaxy. (Image: D. Player (STScI) via NASA, ESA, and CSA)

More than half of the Sun-like star systems surveyed in the Milky Way harbor a mysterious type of planet unlike any in our own solar system that the James Webb Space Telescope will be able to shine some light on. Larger than Earth, smaller than Neptune, and orbiting closer to their stars than Mercury orbits the Sun, these warm-to-hot sub-Neptunes are the most common type of planet observed in the galaxy.

But although researchers have been able to measure basic properties — including size, mass, and orbit — of hundreds of these planets, their fundamental nature remains unclear. Are they dense, Earth-like balls of rock and iron, blanketed in thick layers of hydrogen and helium gas? Or less dense mixtures of rock and ice, surrounded by steamy, water-rich atmospheres? With limited data and no planets of similar size and orbit in our own solar system to use for comparison, it has been difficult to answer these questions.

“What are these planets? How do they form? Why doesn’t our solar system have them? These are fundamental questions,” explains Jacob Bean, an astronomer at the University of Chicago who has led numerous observations of exoplanets.

The key to figuring out what sub-Neptunes are made of and how they formed is examining their atmospheres. But getting a clear view has not been easy. The most effective method of analyzing exoplanet atmospheres is a technique known as transmission spectroscopy. When the planet is transiting its star, some wavelengths (colors) of starlight are filtered out by gases in the planet’s atmosphere.

Because each type of gas has a unique “signature,” or set of wavelengths that it absorbs, it’s possible to figure out what an atmosphere is made of based on patterns in the transmission spectrum. This technique has been successful for many exoplanets, but not for most sub-Neptunes. Eliza Kempton of the University of Maryland–College Park, who specializes in theoretical modeling of exoplanet atmospheres, explained:

The issue seems to be aerosols, tiny particles and droplets that make up clouds or haze. These particles scatter starlight, eroding the prominent spectral peaks into subtle undulations and rendering the spectrum virtually useless in terms of determining gas composition.

GJ 1214 b, a warm sub-Neptune orbiting a nearby red dwarf star, has been the subject of dozens of investigations. Its short orbital period, large size relative to its star, and comparative proximity to Earth make it easy (as exoplanets go) to observe effectively, while its status as the benchmark sub-Neptune — and, according to Bean, “the most mysterious exoplanet that we know of” — make it a worthy target for investigation.

The team will use  James Webb Space Telescope’s Mid-Infrared Instrument (MIRI) to stare at the GJ 1214 system nearly continuously for nearly 50 hours as the planet completes a little more than one full orbit. They will then analyze the data in three different ways to narrow down the possible combinations of gases and aerosols that make up GJ 1214 b’s atmosphere.

It’s not clear what the aerosols surrounding warm sub-Neptunes like GJ 1214 b are made of, but they could be similar to those that make up smog-like haze found on Saturn’s moon Titan. To test this hypothesis, the researchers decided to target TOI-421 b, a planet that is similar in size and density to GJ 1214 b but is thought to be too hot for sooty haze to exist.

The James Webb Space Telescope will observe TOI-421 b twice as it transits its star, once using the Near-Infrared Imager and Slitless Spectrograph (NIRISS) and again with the Near-Infrared Spectrograph (NIRSpec), to produce a complete near-infrared transmission spectrum of the planet. If the hypothesis is correct and TOI-421 b’s skies are clear, the spectrum can be used to measure the abundance of molecules like water, methane, and carbon dioxide. If it turns out that TOI-421 b has an aerosol problem after all, the team will use the data to better understand what those aerosols are made of.

Kempton and Bean are confident that by probing elusive sub-Neptune atmospheres in a number of different ways with the James Webb Space Telescope, scientists will finally begin to understand not just these two specific objects, but an entire class of planets.