Hubble Takes a Grand Tour of the Solar System 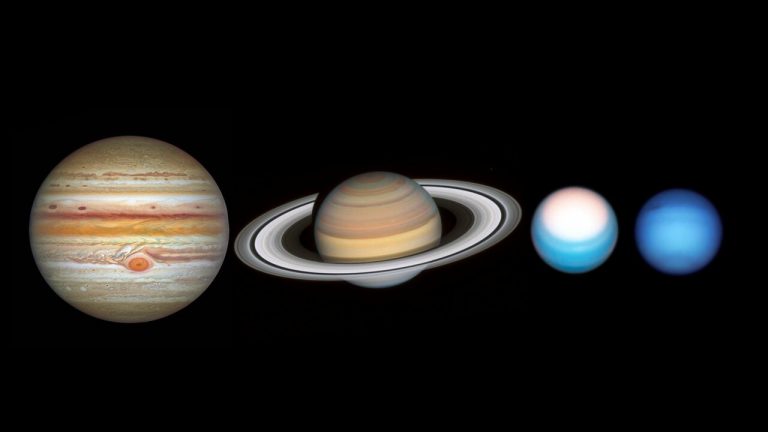 The NASA/ESA Hubble Space Telescope has completed its annual grand tour of the outer Solar System. This is the realm of the giant planets — Jupiter, Saturn, Uranus, and Neptune — extending as far as 30 times the distance between Earth and the Sun. (Image: A. Simon (Goddard Space Flight Center), and M.H. Wong (University of California, Berkeley) and the OPAL team via NASA, ESA)

The NASA/ESA Hubble Space Telescope has completed its annual grand tour of the outer Solar System. This is the realm of the giant planets — Jupiter, Saturn, Uranus, and Neptune — extending as far as 30 times the distance between Earth and the Sun. Unlike the rocky terrestrial planets like Earth and Mars that huddle close to the Sun’s warmth, these far-flung worlds are mostly composed of chilly gaseous soups of hydrogen, helium, ammonia, methane, and other trace gases around a packed, intensely hot, compact core.

Though robotic spacecraft have sent back snapshots of their visits to these four monster planets over the past 50 years, their swirling, colorful atmospheres are constantly changing. Fulfilling the role of a weather forecaster, every time Hubble’s sharp cameras revisit these worlds there are new surprises, offering fresh insights into their wild weather, driven by still largely unknown dynamics taking place under the cloud tops.

Hubble’s snapshots of the outer planets reveal both extreme and subtle changes rapidly taking place in these distant worlds. The telescope’s sharp view gleans insights into the fascinating, dynamic weather patterns and seasons on these gas giants and allows astronomers to investigate the very similar — and very different — variables that contribute to their changing atmospheres.

This year’s Hubble observations of Jupiter track the ever-changing landscape of its turbulent atmosphere, where several new storms are making their mark and the planet’s equator has changed color yet again.

Hubble’s 4 September photo puts the giant planet’s tumultuous atmosphere on full display. The planet’s equatorial zone is now a deep orange hue, which researchers are calling unusual. While the equator has departed from its traditional white or beige appearance for a few years now, scientists were surprised to find a deeper orange in Hubble’s recent imaging, when they were expecting the zone to cloud up again.

Just above the equator, researchers note the appearance of several new storms, nicknamed “barges.” These elongated red cells can be defined as cyclonic vortices, which vary in appearance. Whilst some of the storms are sharply defined and clear, others are fuzzy and hazy. This difference in appearance is caused by the physical properties within the clouds of the vortices.

Researchers also note that a feature dubbed “Red Spot Jr.” (Oval BA), below the Great Red Spot where Hubble just discovered that winds are speeding up, is still a darker beige color, and it is joined by several additional white, cyclonic storms to the south.

Hubble’s crisp views of Jupiter in 2020 were one of the most popular ESA/Hubble photo releases to date.

Hubble’s new look at Saturn on 12 September 2021 shows rapid and extreme color changes in the bands in the planet’s northern hemisphere, where it is now early autumn. The bands have varied throughout Hubble observations in both 2019 and 2020. Hubble’s Saturn image catches the planet following the southern hemisphere’s winter, evident in the lingering blue-ish hue of the south pole.

Hubble’s 25 October view of Uranus puts the planet’s bright northern polar hood in the spotlight. It’s springtime in the northern hemisphere and the increase in ultraviolet radiation from the Sun seems to be causing the polar region to brighten. Researchers aren’t sure why. It could be a change in the opacity of atmospheric methane or some variation in the aerosol particles. Curiously, even as the atmospheric hood gets brighter, the sharp southernmost boundary remains at the same latitude. This has been constant over the past several years of Hubble observations of the planet. Perhaps some sort of jetstream is setting up a barrier at that latitude of 43 degrees.

In observations taken on 7 September 2021, researchers found that Neptune’s dark spot, which was recently found to have reversed course from moving towards the equator, is still visible in this image, along with a darkened northern hemisphere. There is also a notable dark, elongated circle encompassing Neptune’s south pole. The blue color of both Neptune and Uranus is a result of the absorption of red light by the planets’ methane-rich atmospheres, combined with the same Rayleigh scattering effect that makes Earth’s sky blue.