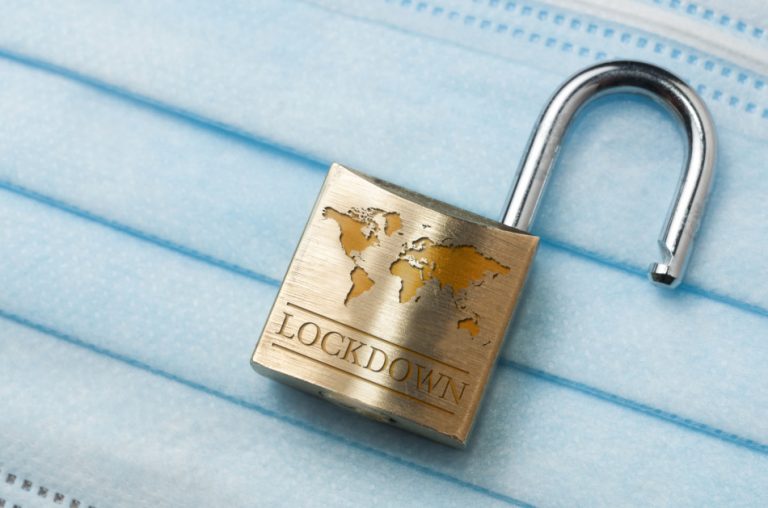 April 2020 saw approximately 3.9 billion people in over 90 countries under some form of government required lockdown.  (Image: Christian Storto via Dreamstime)

Wikipedia describes a lockdown as “a restriction policy for people or community to stay where they are, usually due to specific risks to themselves or to others if they can interact and move freely.”

In November 2020, “lockdown” was declared word of the year by Collins Dictionary — hardly surprising given how many global lockdowns have continued over a year since COVID-19 was officially declared a pandemic by the World Health Organization (WHO).

April 2020 saw approximately 3.9 billion people in over 90 countries under some form of government-required lockdown.

A reminder of the Spanish flu?

Although unprecedented, it wasn’t the first time. The Spanish flu pandemic in 1918 is estimated to have claimed the lives of 50 million people globally. The flu didn’t originate in Spain, but Spain was the first country to report deaths from the flu. News of the epidemic had initially been suppressed in other countries, drawing parallels to widely shared reports of China delaying primary information right from the start of the spread of the coronavirus.

In May 2020, the BBC published a report titled Coronavirus: How they tried to curb the Spanish flu pandemic in 1918.  A 1919 report by Sir Arthur Newsholme for the Royal Society of Medicine was a memorandum intended for public use declaring that staying at home and avoiding larger public spaces was essential in avoiding illness or death from the flu, but it was “buried by the government.”

Although governments of today, for the most part, have adhered to locking down their own countries to avoid the spread of today’s virus, it would also appear that attempts to “mask over” what’s been globally occurring are, again, similar to actions taken in 1918.

Even in 1918, public health messages were confusing — and, just like today, fake news and conspiracy theories spread around. In comparison, today we have evolved to have far better understandings of general life hygiene. The power of social media today also makes our modern-day pandemics’ experiences very different from the one experienced back in 1918.

Some positive changes from lockdown

In January 2021, World Economic Forum (WEF) published Lockdown has led to positive change for some people. Here’s why. Lockdowns for some provided an unexpected opportunity to make positive changes to their lives. Lockdowns removed many of life’s routines and demands.

An article by The Conversation in January 2021 published the results of 3,000 people surveyed in Scotland. More than 50 percent reported:

The authors found that people could spend time on valued and enjoyable activities, becoming more appreciative and taking less for granted. In addition, many liked the slower pace of life they had to embrace.

Lockdowns have had adverse effects, with rising numbers of depression reported among children and adults and increasing reports of addictions worldwide. However, many can admit that in some ways, the lockdowns were refreshing.

It would seem that most families have risen above the stress of the pandemic to become even closer than ever before. A survey of 2,000 British parents by Mumpoll found that four in five believe their families have formed stronger bonds. Being forced to halt busy lives and spend time together has made many re-think what’s important, reported The Independent.

With fewer humans out and about during lockdowns, animals were able to roam more freely. In April 2020, flamingos flocked to India in the thousands to lakes across the country, lighting up the lakes a beautiful shade of pink. In the same month, locals in the Punjab region of India were even able to see the Himalayas for the first time in decades due to reduced levels of pollution.

With rising infection numbers being re-recorded in the UK, prompt calls are being made to reintroduce restrictions. With winter coming soon, only time will tell if we do find ourselves in lockdown again. If we do, I’ll be sure to remind myself of the positive effects instead of the regularly discussed negatives.