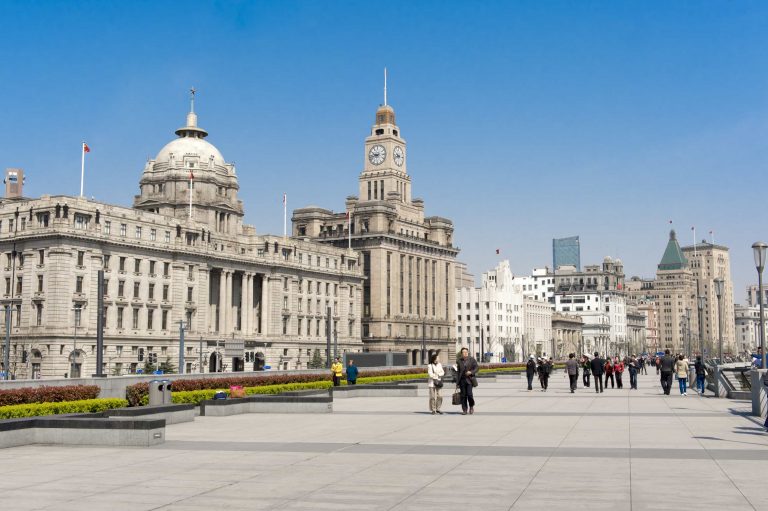 In 1883, Shanghai was rocked by turmoil: torrential rains, a plague, chaos in the markets, and a crisis due to a collapse in the price of silk. (Image: Hel080808 via Dreamstime)

Cheng Decheng and his son Cheng Linshen were well known among Anhui merchants for their honesty and scrupulous values when conducting business. The Anhui merchants, who followed the teachings of Confucius, used these values to guide their business principles. They emphasized honesty, trustworthiness, righteousness, and above all quality when doing business with others.

During the Tongzhi period of the Qing Dynasty, a 13-year-old young man in Fengtang Village, Xi County, Anhui, carried a small backpack, bade farewell to his parents, and left his hometown for Shanghai to earn a living. The young man was Cheng Decheng, the father of Cheng Linsheng, who later became an Anhui merchant well-known as China’s Hardoon (Silas Aaron Hardoon was a Jewish real estate tycoon in the late 19th and early 20th century in Shanghai).

When Cheng Decheng arrived in Shanghai, he asked his fellow countryman to help him and soon learned to be a chef at a tea shop. With his cleverness, honesty, and hard work, Cheng Decheng made quick progress in his cooking skills, especially being good at Anhui cuisine.

One day, when Cheng Decheng went to the bathroom near the tea shop, he accidentally picked up a heavy wallet. After opening it, he found tens of thousands of banknotes and drafts in it. Of course, Cheng Decheng was shocked. But he thought that the owner must be anxious. So he waited by the door with the wallet in his hand.

About two hours later, a foreigner hurried over. He was the manager of Shanghai Lihe foreign company from Germany. After confirming he was the wallet’s owner, Cheng returned it to him. The manager was so touched that he took a thick stack of banknotes to thank Cheng, but Cheng firmly refused it.

While talking with Cheng, the manager learned Cheng was a chef, he invited Cheng to work for his company. Cheng thought that it was a good chance and accepted the offer.

The manager soon taught him how to handle company business. With his intelligence, Cheng mastered the key points very quickly. Later, when the manager returned to his country for consultations, he entrusted Cheng to look after the company’s daily business. He promised to give him half of his company assets when he returned. However, Cheng Decheng declined the offer.

The German company’s manager, who knew the rules of doing business in China, was very much impressed with Cheng’s honesty and work ethic. He also knew the traditions of the Anhui people of owning property and having sons. Therefore, he purchased a large piece of land near the horse racetrack in the suburb of Shanghai and gave it to Cheng, who accepted it this time.

With the development and expansion of Shanghai and with a foreign company as his backing, Cheng utilized his land to build houses. Soon, he became wealthy. A saying in Shanghai stated that Cheng Decheng had “two dragons” in real estate. This means the two best locations at that time were properties owned by him. One was from Henan Road to Xizang Road, and the other was from New World to Card Road, today’s Shimen Second Road. Then, his real estate’s value has reached tens of millions of taels of silver.

When his son Cheng Linsheng took over the real estate business, it was during the early years of the Republic of China and Shanghai was developing rapidly.

Cheng Linsheng aggressively invested in road construction and opened up two more main roads. One was the Shimen First Road, and the other was the Xiafei Road. Along both sides of the streets, he built commercial and residential buildings. He built 1,000 houses in Baoxingli and Baoyuli alone, and he rented out most of the houses after finishing construction.

His total assets reached 60 million taels of silver, so people called him “Real Estate King,” “China’s Hardoon,” and “One of the wealthiest Chinese in Shanghai.”

Since then, Cheng Linsheng, who had vast capital wealth, began to invest in other businesses. He established the first department store in Shanghai in cooperation with Cai Chang, a businessman from Guangdong.

Cheng Linsheng owes his remarkable achievements to his father who laid the foundation. Cheng Decheng’s hard work and honesty brought him fabulous rewards in money and business.  Good and evil will always be rewarded, which is the way of Heaven. The experiences of Cheng Decheng and his son perfectly illustrate this.