How Are Oysters Able to Form a Perfect Pearl? 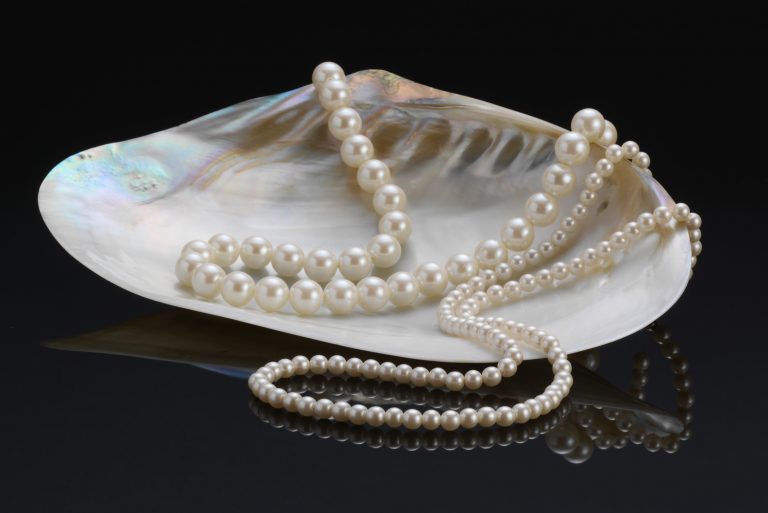 For centuries, pearls have been a symbol of beauty and purity. Today, they are regarded as both classic and contemporary, coming in many more fashionable styles than your grandmother’s traditional strand of pearls. (Image: Somakram via Dreamstime)

A perfect pearl or symmetrical Oriental pearl forms when an irritant works its way into a particular species of oyster, mussel, or clam. As a defense mechanism, the mollusk secretes a fluid to coat the irritant. Layer upon layer of this coating is deposited on the irritant until a lustrous gem is formed.

A team of researchers has found out the secret behind an oyster’s symmetrical pearl creation. The ones formed by oysters are often perfectly round and stunningly symmetrical. The team is from the University of Michigan.

According to the new discovery, oysters and mussels make use of a complex process so that the gems are grown symmetrically. They are created when an irritant molecule gets inside the mollusk. The animal then protects itself by making smooth layers of protein and minerals- around it. Each layer built over this asymmetrical object actually adapts to smooth out any irregularity and, in the end, a round pearl is formed.

The mollusk modulates layer thickness, all along. So, if the base layer is thick, the subsequent layers on top will be thinner. So the resultant pearl will have a thickness that makes it look round and uniform. The researchers observed Keshi pearls made by the Akoya pearl oysters. The venue was a coastal pearl farm located in eastern Australia.

The researchers made use of a diamond wire saw and cut these pearls into cross-sections. They used Raman spectroscopy to polish and assess the gems next. This non-destructive technique enabled them to characterize their structure.

How a perfect pearl is formed

One of the pearls had 2,615 layers, made over a period of 548 days. The analysis showed its layer thickness fluctuations adhere to a phenomenon called pink noise. In it, random-looking events are actually linked. In this context, the layers’ thicknesses look random but a link to the previous layer’s thickness is there. The same phenomenon exists in seismic activity.

The study finding has been hailed by the scientific communities. The University of Wisconsin-Madison’s physicist Pupa Gilbert said: “That nacre self-heals and when a defect arises, it heals itself within a few [layers], without using an external scaffolding or template. Nacre is an even more remarkable material than we had previously appreciated.”

The team members said the small creatures make a super tough but lightweight material easily and doing the same with the latest technology will be very hard for humans. The layer is made with protein, calcium, carbonate, but the resultant material is up to 3,000 times tougher than source materials.

This technique outshines almost everything else in the world when it comes to the symmetry of creation. University of Michigan’s professor Robert Hovden who was involved with this study said: “We humans, with all our access to technology, can’t make something with a nanoscale architecture as intricate as a pearl. So we can learn a lot by studying how they go from disordered nothingness to this remarkably symmetrical structure.”

These layers comprise over 90 percent of the volume of a pearl. The layer becomes progressively thinner from the center to outwards as it grows. Hovden added: “These thin, smooth layers of nacre look a little like bedsheets, with organic matter in between. There’s the interaction between each layer, and we hypothesize that that interaction is what enables the system to correct as it goes along.” While he admitted the study is yet to analyze everything involved in the phenomenon, it looks like there is a structure in the chaotic process.

The team observed that these gems do not have proper long-range order, but exhibit medium-range order. In simple words, they have symmetry for approximately 20 layers. This is adequate for maintaining consistency as well as durability.