The Art of Japanese Swordsmithing 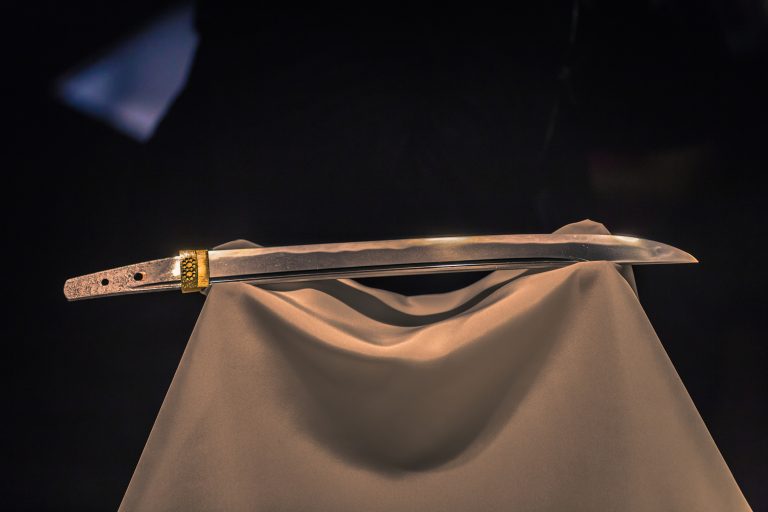 The popularity and cult status of Katana or swords used by mighty Samurai warriors is hard to overlook. (Image: Rui Baião via Dreamstime)

The popularity and cult status of Katana or swords used by mighty Samurai warriors is hard to overlook. The secret of these swords being so lethal lies in the hands of veteran Japanese swordsmithing. Katanas were crafted so strong that warriors used them to cut other swords!

The long-bladed katanas are still created using traditional techniques by only a few licensed craftsmen. The crafting process is elaborate and time intensive, but the results are impressive, to say the least. The blades are made using tamahagane steel and the material is made to undergo smelting through iron sands. This helps the craftsmen remove any impurity. The smelting involves the addition of some charcoal to achieve maximum strength.

The age-old process of making the Katana sword may seem tedious, but the craftsmen adhere to every step. Before putting the blades into the furnace, the swordsmiths coat these with clay. This results in the sword’s edge getting more hardened than the spine section. This is what makes the swords curve.

Watch as Seiji Miyaguchi (as Kyuzo), performs an introductory scene with an actual Katana sword in Akira Kurosawa’s 1954 classic The Seven Samurai:

The tamahagane steel is heated and cooled dozens of times. This helps change the steel at the molecular level. Creating a sword following the traditional process may take months or even more. To ensure these swords are crafted well, the smiths need to have immense physical strength and they also require dexterity and patience.

The most important part of Japanese swordsmithing is maintaining the right amount of carbon in the blade. If the carbon is too little, then the resultant metal will not be strong, while excess carbon will make the sword brittle.

The first step in katana making is called kitae. Pieces of tamahagane are forge-welded and made into a single block. It forms the blade’s outer skin. Then the smith hammers out and folds back the block. This helps them discard the impurities and the carbon is homogenized properly throughout the metal.

The folding leads to the formation of the jihada, a.k.a. patterns. The smiths may opt for specific patterns. They opt for varying folding directions. The block, for example, may be folded repeatedly in alternate directions, in the same direction, or even crosswise. The outer skin, known as kawagane, is wrapped around shingane, denoting a softer iron core. The merging of layers gives the blade strength to resist breakage while providing immense flexibility. The two layers are hammered while heated. This leads to the formation of the sword.

The hardening of the sword’s edge is extremely difficult but extremely important in Japanese swordsmithing. The smiths use a coating made with clay, ash, water, and other ingredients. The mixture, called yakibatsuchi is applied over the sword’s surface. The sword is heated in forge rooms where the only light is glowing coals. As the heated sword reaches a critical temperature level, it is put in water. At every step, timing plays a critical role.

The structure of steel alters to austenite at a temperature of 750°C. This is when the mixing of iron and carbon is physically completed. As the blade is soaked in water, austenite becomes martensite, said to be the hardest form of steel.

The finished sword gets a softer body and harder edge-eventually. After this stage, the blade is given to the polisher. In the end, a sword with a mirror-like polish and of the highest quality Japanese swordsmithing in the world is produced that often commends prices of US$50,000-$100,000 depending upon the skills of the swordsmith.