Ancient Chinese Fable: Compassionately Save a Life and Gods Will Save Yours 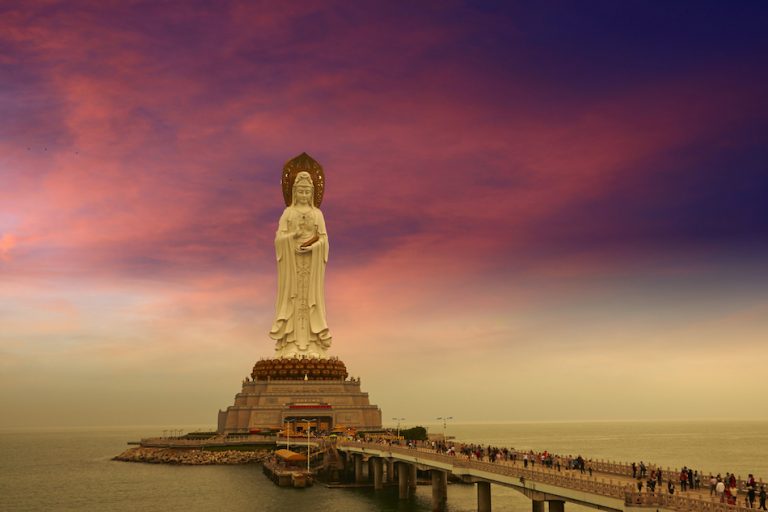 In this ancient Chinese tale, Bodhisattva Guanyin visits earth to give people a lesson in kindness. (Image: Xiao Yong via Dreamstime)

This ancient Chinese fable “If You Save a Life, Gods Will Save You,” comes from Treasured Tales of China Vol. 1

This book is filled with historical stories and legends that foster morality and virtue. The short stories take us back to ancient times in China and the book sparkles with wisdom. It is translated by Dora Li and edited by Evan Mantyk and Connie Phillips. Here, we will share one story from the chapter “Good & Evil Repaid.”

At that time, bandits often went to villages in this area to rob and kill people. One day, the news of bandits approaching the villages spread to the two villages, so the villagers all hid in their own caves. At this time, a young woman carrying a baby happened to be traveling by Peach Stone Village. She followed the villagers, hiding in the cave.

The cave was small, and the villagers were upset to have this stranger take up space in their cave. When everyone in the cave was quiet, the baby started to cry. The woman tried to calm him down but it didn’t work. Some villagers were afraid that the crying sound would attract the bandits.

They suggested that the woman go away. Not a single person in the cave spoke up for the woman and baby; all they cared about was their own safety, so the woman was forced to leave the cave. She exited Peach Stone Cave and walked toward Sand Stone Cave.

Villagers in Sand Stone Cave heard the baby crying and some came out of the cave to check. When they saw the woman and baby, they immediately had the woman come into their cave and tried to make her and her baby comfortable inside. By doing so, they figured the crying sound would die down a bit and wouldn’t be as audible to the bandits from the outside.

Strangely, as soon as the woman and baby came in, the baby did not cry at all. They waited quietly but nervously for half a day. One young man left the cave to check if the coast was clear. He made sure that the bandits were gone, and then the people of Sand Stone Village all came out.

When the others found out, someone thought of the woman and baby, but there was no trace of them. Thus, people believe that the woman was, in fact, Bodhisattva Guanyin and that she had taken a human form to test people and to save the kindhearted.

Click on Treasured Tales of China Vol. 1 to purchase the book.