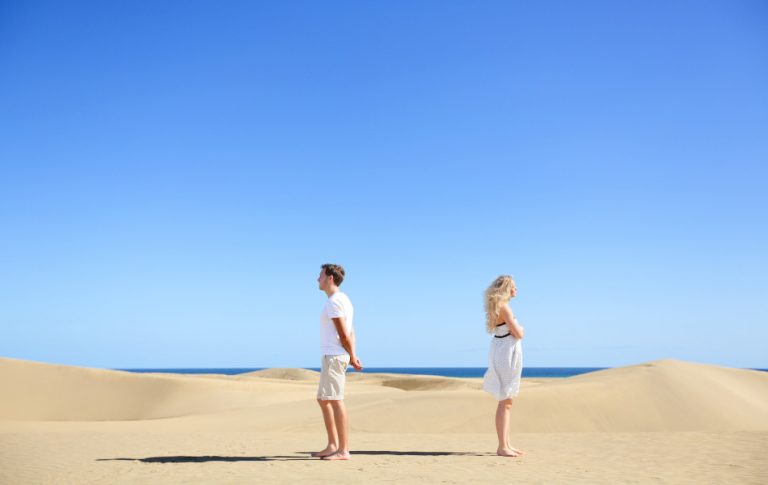 Breakups and the emotions they bring are complicated, but breakups aren't always as bad as we expect. (Image: Martinmark via Dreamstime)

A breakup can be defined as a disruption, dissolution of connection, or separation of a mass into parts. Although breakups are often associated with relationship breakdowns, other examples include friendship breakups and the loss of a job.

Breakups can have a dramatic impact on our bodies as well as our emotional state. Broken heart syndrome is an actual condition with severe and painful symptoms. Stress caused by breakups can cause acne, loss of appetite, and sore muscles.

If a breakup is unexpected or unwanted, an individual may suffer significant psychological distress stemming from shock. The feeling typically settles in the pit of the stomach, making one feel that they have been kicked or punched in the midriff. It is normal to feel out of control as emotions ricochet around. There can be the sensation of being stuck and unable to let go, even if you have the desire to do so.

If your body feels like a breakup is impacting you, it’s essential to make sure you get enough sleep and eat well. Not feeling like yourself after a breakup is typical, but reaching out to loved ones and seeking help should be a priority if your emotional distress continually makes it difficult for you to eat, sleep, or complete daily functions.

The ending of a friendship can manifest in feelings of sadness, loneliness, or anxiety about meeting the other person at previously enjoyed hangouts and with mutual parties picking sides. Popular culture portrays the process of romantic relationship breakups. However, it can feel like we are on our own when it comes to a friendship breakup.

In September 2018, Time published an article called Why Ending A Friendship Can Be Worse Than A Breakup. Miriam Kirmayer, a clinical therapist who specializes in young adult and adult relationships, explored why “friendships can be an even stronger predictor of well-being than familial relationships as we get older.” For example, there is generally a conversation in romantic relationships that both people recognize means the ‘official breakup’. Although this can hurt, there is a sense of relief and acknowledgment, leading to closure. Lacking the experience of having this kind of conversation at the end of friendships, Kirmayer says, can feel even more complicated and confusing.

Unemployment, whether it be through job loss, not having a job, or seeking work, has consistently been found to negatively impact a range of health outcomes. There are several mechanisms by which unemployment could harm health which include inducing stress, reducing self-esteem, and causing financial hardship.

Having recently read and reviewed British comedian Rosie Wilby’s book The Breakup Monologues: The Unexpected Joy of Heartbreak, I found myself intrigued by how positively breakups we experience throughout life can shape us into becoming the people we were destined to be. Of course, for someone in a long-term relationship, most would perceive this to be a strange topic to read about. Still, it’s refreshing to realize that the “worst-case scenario” shouldn’t be brushed off, as breakups can happen to absolutely anybody and at any given time.

Breakups and the emotions they bring are complicated. Even if things have ended healthily and productively, you’ll probably still retain some uncomfortable feelings. Heartbreak through loss can feel like the world is ending, but the good news is that the pain won’t last forever. Research published in The Journal of Positive Psychology states that it takes on average 11 weeks to feel better after a breakup.

Breakups aren’t always as bad as we expect. Knowing how you’ll respond to a breakup is difficult because we are generally bad at predicting our emotional reactions to future events. However, we also underestimate our resilience.