How Kind Words Changed a Wicked Ghost Into a Bodhisattva 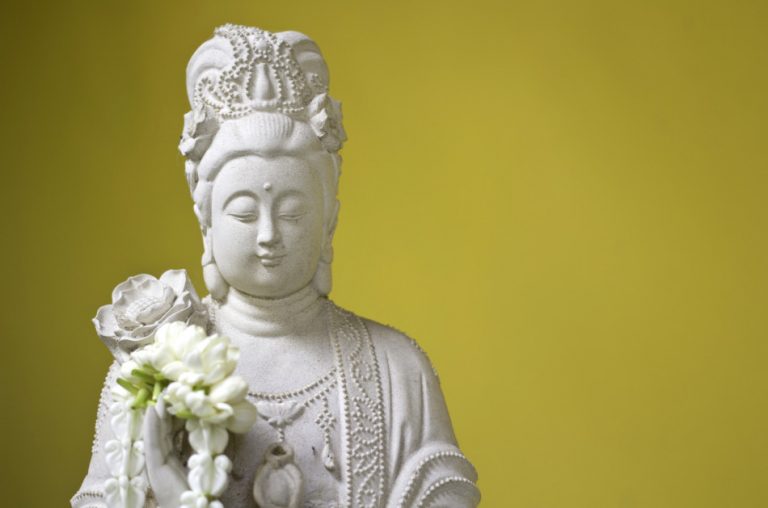 A strange and wonderful thing happened when a sculptor was invited by a temple in a nearby village to sculpt a Bodhisattva statue. (Image: Kittipon Polpuech via Dreamstime)

Sometimes kind words can change something wicked into something good, as a master sculptor discovered one moon-filled night long ago.

In ancient times, there lived a well-known master sculptor in a remote mountain village. Due to his excellent carving skills, a temple in a nearby village invited him to sculpt a Bodhisattva statue.

Unfortunately, the route to the temple was fraught with danger. Passing that way meant that he would have to go through a mountainous area that was known to be haunted. Anyone who passed through the area at night would be killed by a wicked female ghost.

The sculptor’s family and friends urged him not to go, or to at least wait until daybreak to leave, lest he met with misfortune.

But the sculptor did not want to miss the agreed-upon time, so he thanked his fellow villagers for their concern and set out on the road to the temple.

Darkness fell not long after his journey began, but his path was lit by the twinkling of the stars and the moon in the night sky above. As he continued on and rounded a curve in the road, the sculptor suddenly caught sight of a vague image of a woman sitting by the side of the road. She was wearing worn-out straw sandals and appeared exhausted and distressed.

As he drew closer, the sculptor asked: “Are you ok? Can I help you with something?” The woman replied: “I want to visit the neighboring village, but I’m too tired to go on.” Being a kind-hearted person, the sculptor put his own concerns aside and offered to carry the woman on his back to the next village.

After some time, the sculptor’s back began to sweat, and his feet began to ache. As he stopped to rest, the woman asked: “Aren’t you afraid of the legendary female ghost? Don’t you want to hurry on with your journey instead of spending time helping me?”

“Surely, I do want to hurry,” the master sculptor replied, “but if I were to leave you alone in this mountainous area and you encountered danger, what would you do? At least this way we can take care of each other and help each other.”

As he rested under the bright moonlight, the sculptor noticed a large block of wood next to him. Without giving it much thought, he took out his chisel and tools, and, looking at the woman, began carving a figure of her step by step.

Surprised, the woman asked: “Master, what are you carving?”

“I am making a beautiful Bodhisattva figure,” he replied pleasantly. “I feel your face is very kind, like a Bodhisattva, so I am sculpting a Bodhisattva statue using your appearance.”

Upon hearing these kind words, the woman burst into tears. “But I am the legendary wicked female ghost!” she sobbed.

Through her tears, the woman explained how, many years ago, she came across a band of robbers as she was crossing through the mountains with her daughter. The robbers overpowered the woman, raping her and killing her young daughter.

She was so distraught that the woman threw herself into the valley and became the evil ghost who took the lives of passersby at night.

The woman never expected to hear anyone say that she looked very kind, just like a Bodhisattva. The sculptor’s kind words touched the woman deeply.

In that instant, the woman turned into a streak of light and disappeared into the moonlit valley.

When the sculptor arrived at the neighboring village the next day, people were surprised to hear that he’d passed through the mountains at midnight and made it out to tell the tale.

From then on, no night travelers ever came across the legendary wicked female ghost again.