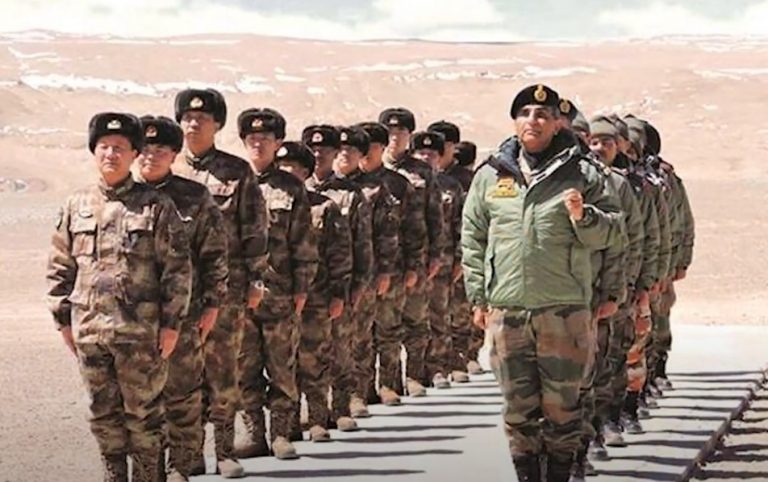 India and China have both continued building military infrastructure along the border, including new frontline observation towers and forward troop bases.  (Image: Screenshot via YouTube)

Here is a snapshot of the conflict between two giants of Asia: China and India. China has the highest population in the world, followed by India, and it is not going to look pretty when they start getting angry with each other.

China has been busy. It is busy in the South China Sea, it is busy in the East China Sea, it is busy confronting the U.S., and busy arguing with Australia. Now, tensions are escalating with India. Is there anything that can deter China? Yes, maybe the weather… because it will be getting quite cold along the China-India border and troops are bunkering down for another bitter winter in a border standoff that started in May last year and has lasted almost 18 months.

China and India share a border of over 3,400 kilometers. Most conflicts between China and India evolve around this ill-defined border that people call the Line of Actual Control, or LAC. India and China have both continued building military infrastructure along the border, including new frontline observation towers and forward troop bases.

China has become increasingly assertive in the Indo Pacific and following the 2017 stand-off between the two countries, China accelerated construction along the border, which continued through to late 2020 and early 2021.

Recently in October, border tensions have flared up again with India testing a nuclear-capable intercontinental ballistic missile and China responding by moving over 100 rocket launchers to the border.

Let’s take a look back in history. The last time India and China went to war was in 1962 during which India suffered a humiliating defeat. Since then, there have been several tense stand-offs.

In 2017, in the Doklam stand-off, Indian forces tried to stop the construction of Chinese roads into territory claimed by Bhutan, which China disagrees with. Since then, China has doubled its efforts to reinforce its position in the area building airbases, heliports, and air defense sites.

Conflict between China and India at Ladakh

In last year’s Ladakh stand-off, India’s construction of a new road to a high-altitude airbase is seen as one of the main triggers for a clash with Chinese troops which left at least 20 Indian soldiers dead. China did not confirm its casualty numbers, but later announced that four Chinese soldiers died in the clash.

Last August, India accused China of provoking military tensions at the border twice within a week. China denied both charges and blamed India for the stand-off.

A month later, China accused India of firing shots at its troops. India accused China of firing into the air. This is quite problematic as there was an agreement in 1996 that prohibited the use of firearms along the border.

China then launched cyber-attacks against Indian civilian infrastructure. Tensions soared. The commander of the Indian Army’s Northern Command later said: “We were absolutely on the brink” of war.

Then in February this year, China agreed to a disengagement plan and both sides withdrew troops. However, recently the talks have reached a stalemate with India saying the Chinese side was not agreeable and the China side saying India had unrealistic demands.

And just in October, China announced a new land border protection law. The law stipulates that China can close its border if a war or other armed conflict nearby threatens border security. China’s People’s Liberation Army and the People’s Armed Police Force are responsible for guarding the border against an “invasion, encroachment, infiltration, provocation.”

India has expressed concern about this law, especially among an unresolved chronic border conflict.

Managing the China and India relationship

Managing the China and India relationship is key to both countries, especially for India because China is its second-largest trading partner after the U.S. In recent years, China has poured billions of dollars into the Indian economy and has become a major shareholder in some of India’s biggest tech companies, Bollywood, and social media services.

Of course, with money comes influence and soft power. A new report by India’s Law and Society Alliance tried to identify how deep and extensive the Chinese foothold in India is. The report identified key elements and ways in which Chinese intelligence services and the Chinese government have assimilated them into various Indian industries, influencing political parties and controlling the China narrative to influence Indian public opinion.

The report urged the Indian government to take concrete steps, much like its counterparts in Canada and Australia, to stop this stealthy large-scale intrusion from Beijing.