‘Dog Hunt’: A Heart-Warming Short Film About a Lost Dog and Greed 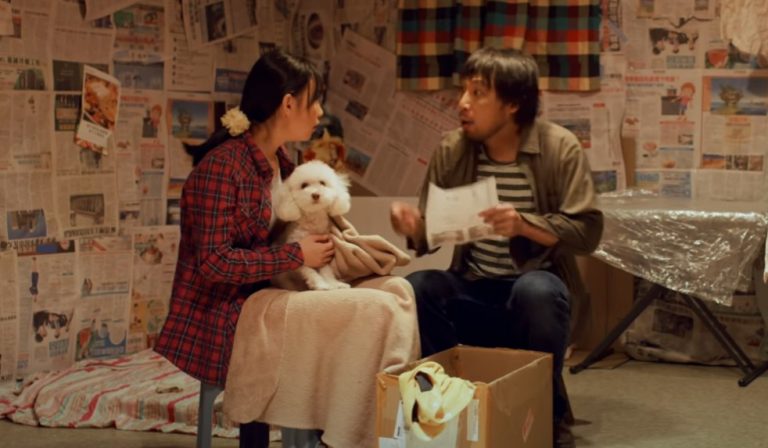 Produced by New Century Pictures, the new short film Dog Hunt is a heart-warming, humorous, and light-hearted comedy pet film. Since its online release on November 12, Dog Hunt has received an overwhelming response. Audiences have been impressed by the storyline and the particular dog “actor,” and they have left many compliments and positive comments.

The second couple is poverty-stricken migrant workers crammed into a basement of less than three square meters, hoping to change their lives by getting the reward for the dog.

Finally, a young couple who believes in “truth, compassion, and forbearance” comes across the dog accidentally.

But nothing is accidental, and something unexpected happens, revealing another story within the first one that shows how all are connected. Even the local police show a good side, and eventually, Donut is returned to its owner after a series of twists and turns.

While the story is in Chinese, anyone watching Dog Hunt will understand the concepts and understand how the story surprises at the end:

Many viewers said that they could see a microcosm of the real world in Dog Hunt and that differences between all three couples and their behavior reflected their inner values. In addition, it prompted people to think more deeply about the simple storyline.

Dog Hunt also contains contemporary Chinese culture, which viewers commented about on YouTube. If you look closely, you will notice how the police use facial-recognition software to track the third couple.

A viewer commented: “What impressed me was the couple Niu Fu and Mei Hua, who from the very beginning felt heartbroken by their situation — oppressed by society, life, and circumstances, living a life where they had no next meal.”

In Dog Hunt, they become greedy for the rising reward, only to end up with nothing in the basket. The poorer the couple is, the more they hustle, forgetting the basics, and try to find ways to grab what they can.

Looking back at today’s China, the social phenomenon and behavior of “who cares about morality and conscience, money is king” abounds.

The disparity in wealth between the poor and the rich in Dog Hunt is also very realistic. The wealthy couple’s reward for finding the lost dog is a considerable sum of money for the poor couple to turn their circumstances around, highlighting the pathological social phenomenon of “dogs being more expensive than people.”

Human greed leads to nothing

A viewer named Li Yuan Yuan commented: “The story is short but intriguing because human greed leads to nothing. It has nothing to do with being rich or poor, it’s the endless desire of a man that makes him fall into the abyss.”

A viewer called Meow Miao Miao commented that both the rich and poor couples “are in stark contrast to the attitude of the Falun Gong couple. It is when people are kind-hearted that they are happy with what they have, and it feels like this young couple are the ones who are truly happy and relaxed.”

Viewer G Kevin commented: “I hope it happens to them… the kind young couple who found the puppy and returned it to its owner without asking for anything in return… how many good people of such high moral character can there be in the world nowadays? Their smiles are so moving.”

Wu Yu wrote this comment: “It [the puppy] seemed to understand the script, and when Niu Fu became greedy, the dog barked at him. When it saw the kind-hearted Xiao Yue [a Falun Gong practitioner], it ran happily to her as if it saw hope. They say that small animals rely on their instincts to judge right and wrong.” Is this instinct also an inspiration to every viewer?

It is the first time New Century Films has incorporated the element of a pet puppy into a film, and it is a clever idea that will appeal to audiences of all ages. The viewer who signed Mei Tai commented: “My children laughed loudly at the film and learned the truth that greed is not enough to swallow an elephant and that it’s not a good idea to scavenge for money. They were also interested in the dog in the film.”

A viewer named Yu-Ching commented: “This short film showed me what a light comedy should be like, with laughs, no vulgarity, depth, not tedious, pointing out social issues without being clichéd. It’s worth watching.”

Since its inception in 2018, New Century Films has been committed to producing works that enlighten the mind and revitalize traditional culture and values. Viewers of “random channel” gave Dog Hunt very high praise: “In today’s faithless and materialistic Chinese society, it is hard to find a film like this that is not made for profit, and its unique and professional artistic expression is even more valuable.”

New Century Film and Television has created over 40 films that have won admiration and praise from audiences. In addition, the company has won 101 awards in various film festivals. The feature film Homecoming won 61 international film festival awards — an unusual achievement in the overseas Chinese film industry.

On its third anniversary on September 11, 2021, the not-for-profit company said: “Thanks to every audience friend who pays attention to the New Century Film and Television. We will stick to the original and continue to create more movies that can bring light and warmth to people, and live up to the reputation of ‘a clear stream in the film and television industry.’”

Translation by Eva and edited by Helen