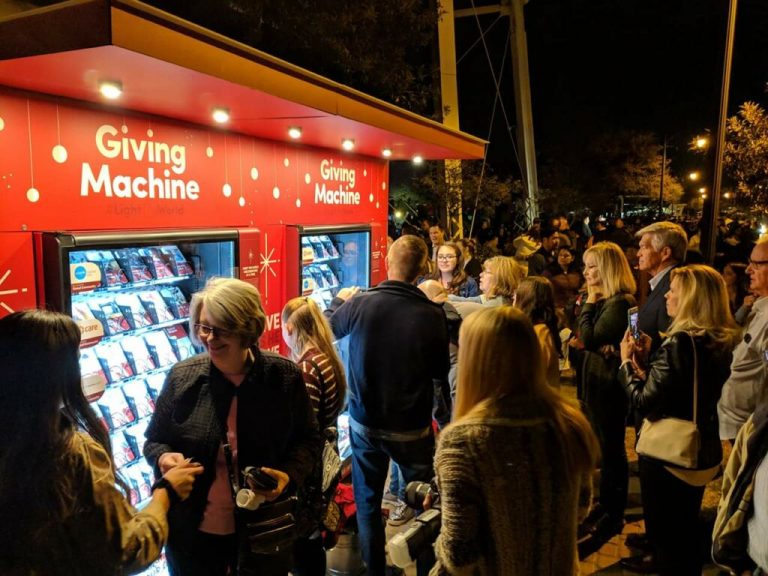 Giving Machines provide opportunities for people to sponsor specific service activities with the swipe of a bank card or cash to help partnering charities purchase items such as food, clothing, medicine, hygiene supplies, sporting equipment and livestock for the different demographics they serve. (Image: via The Church of Jesus Christ of Latter-day Saints)

Imagine swiping your credit card at a vending machine — but instead of buying a candy bar for yourself, you’re buying a sheep for a family in a third-world country. Or a polio vaccine. Or a pair of shoes. Or 100 meals for your local food bank. That’s exactly what happens in several U.S. cities where vending machines are being converted into “Giving Machines” to make the season cheerful for needy people.

The Giving Machines provide a way for people to help those in need and make the Christmas season a little more meaningful for themselves and countless others. The donors buy items using credit cards and the Giving Machines give out postcards with details.

The first of these Giving Machines were set up in Utah’s Salt Lake City in 2017. The Utah pilot program was extremely successful and it led to donations amounting to a half-million dollars. The next year, the feedback was even greater, with more than 92,000 Giving Machine transactions. In 2019, the program was taken outside the U.S. to Manila and London.

However, because of COVID-19 pandemic restrictions and precautions last year, the Giving Machines were not made available to the public during the 2020 Christmas season.

Light The World With Love

Organized by The Church of Jesus Christ of Latter-day Saints, the annual effort features well-recognized, red Giving Machines where individuals can donate to dozens of local and global charity organizations during the Christmas season. This year’s initiative is named “Light The World With Love.”

Beginning at various times in November and running through January 1, the machines will be featured at the following locations:

The Giving Machines provide service with a twist — rather than producing a product following a purchase, the vending-type machines allow an individual to make charitable donations.

As in the past, 100 percent of all donations go directly to each participating charitable organization, with the Church covering all expenses, including credit card transaction fees.

The Light the World project has received a very good response and each year it has grown. So far, around US$2.5 million has been raised in Salt Lake City alone. Globally, the amount climbs to over US$9 million. The church management believes the project will make people more generous and usher in the spirit of humanity.

The Church of Jesus Christ of Latter-day Saints’ Elder Kevin W. Pearson said: “It’s not just the monetary giving. We hope it causes people to shift their attitude and mindset about being more giving, being more forgiving, and being more open to the needs and challenges that other people have around us. It doesn’t take a lot to do something meaningful for somebody and it’s a pattern of doing that brings joy and happiness.”

The church management added that the program will let people teach children good deeds and this goes a long way in nurturing the spirit of humanity.