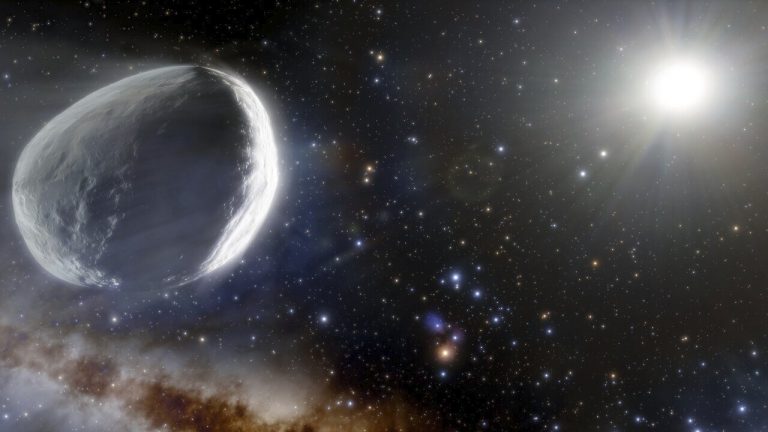 Comet Bernardinelli-Bernstein (BB), represented in this artist rendition as it might look in the outer Solar System, is estimated to be about 1000 times more massive than a typical comet. The largest comet discovered in modern times, it is among the most distant comets to be discovered with a coma, which means ice within the comet is vaporizing and forming an envelope of dust and vapor around the comet's core. (Image: J. da Silva via NOIRLab / NSF / AURA)

A new study by University of Maryland astronomers shows that comet Bernardinelli-Bernstein (BB), the largest comet ever discovered, was active long before previously thought, meaning the ice within it is vaporizing and forming an envelope of dust and vapor known as a coma. Only one active comet has been observed farther from the sun, and it was much smaller than comet BB.

The finding will help astronomers determine what BB is made of and provide insight into conditions during the formation of our solar system. The finding was published in The Planetary Science Journal. Tony Farnham, a research scientist in the UMD Department of Astronomy and the lead author of the study, said:

“These observations are pushing the distances for active comets dramatically farther than we have previously known.”

Knowing when a comet becomes active is key to understanding what it’s made of. Often called “dirty snowballs” or “icy dirtballs,” comets are conglomerations of dust and ice left over from the formation of the solar system. As an orbiting comet approaches its closest point to the Sun, it warms and the ices begin to vaporize. How warm it must be to start vaporizing depends on what kind of ice it contains (e.g., water, carbon dioxide, carbon monoxide, or some other frozen compound).

Scientists first discovered comet BB in June 2021 using data from the Dark Energy Survey, a collaborative, international effort to survey the sky over the Southern hemisphere. The survey captured the bright nucleus of the comet, but it did not have a high enough resolution to reveal the envelope of dust and vapor that forms when the comet becomes active.

Comet BB is the largest comet ever observed

At 100 km across, comet BB is the largest comet ever discovered by far, and it is farther from the Sun than the planet Uranus. Most comets are around 1 km or so across and much closer to the Sun when they are discovered. When Farnham heard about the discovery, he immediately wondered if images of comet BB had been captured by the Transient Exoplanet Survey Satellite (TESS), which observes one area of the sky for 28 days at a time. He thought TESS’s longer exposure times could provide more detail.

Farnham and his colleagues combined thousands of images of comet BB collected by TESS from 2018 through 2020. By stacking the images, Farnham was able to increase the contrast and get a clearer view of the comet. But because comets move, he had to layer the images so that comet BB was precisely aligned in each frame. That technique removed the errant specks from individual shots while amplifying the image of the comet, which allowed researchers to see the hazy glow of dust surrounding BB, proof that BB had a coma and was active.

To ensure the coma wasn’t just a blur caused by the stacking of images, the team repeated this technique with images of inactive objects from the Kuiper belt, which is a region much farther from the Sun than comet BB where icy debris from the early solar system is plentiful. When those objects appeared crisp, with no blur, researchers were confident that the faint glow around comet BB was in fact an active coma.

The size of comet BB and its distance from the Sun suggests that the vaporizing ice forming the coma is dominated by carbon monoxide. Since carbon monoxide may begin to vaporize when it is up to five times farther away from the Sun than comet BB was when it was discovered, it is likely that BB was active well before it was observed. Farnham said:

“We make the assumption that comet BB was probably active even further out, but we just didn’t see it before this. What we don’t know yet is if there’s some cutoff point where we can start to see these things in cold storage before they become active.”

According to Farnham, the ability to observe processes like the formation of a cometary coma farther than ever before opens an exciting new door for astronomers. Farnham said:

“This is just the beginning. TESS is observing things that haven’t been discovered yet, and this is kind of a test case of what we will be able to find. We have the potential of doing this a lot, once a comet is seen, going back through time in the images and finding them while they are at farther distances from the sun.”

Provided by: University of Maryland [Note: Materials may be edited for content and length.]