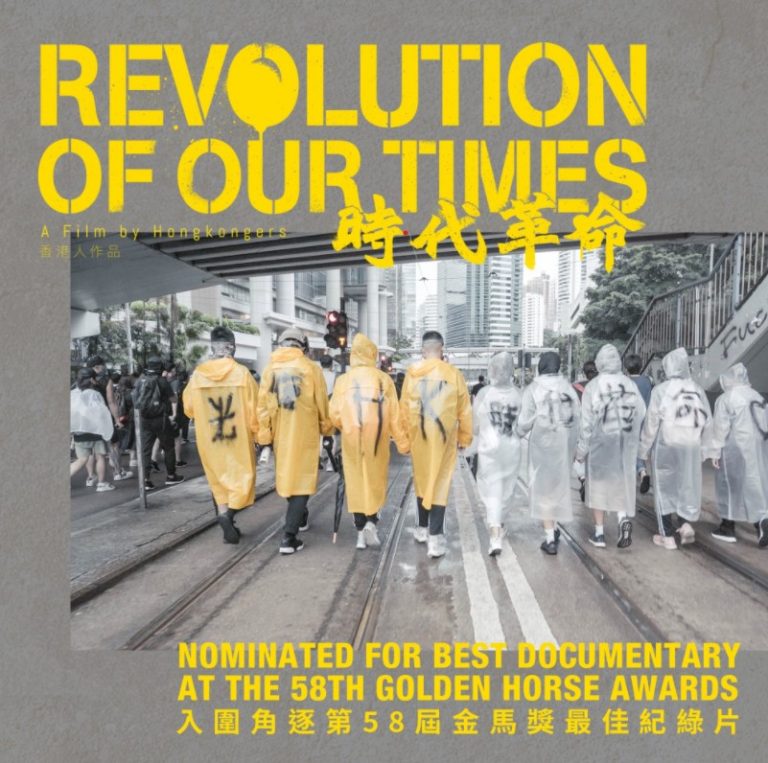 The best documentary award was won by Hong Kong's banned film 'Revolution of Our Times.' (Image: via Twitter)

The 58th Golden Horse Awards took place on November 27, 2021, at the Sun Yat-sen Memorial Hall in Taipei, Taiwan. The event was hosted by the Taipei Golden Horse Film Festival Executive Committee. The best short documentary film was won by Lin Youen with In Their Teens, while the best documentary award was won by Hong Kong’s banned film Revolution of Our Times. When the winners were announced by the award presenter, the audience applauded warmly.

The Revolution of Our Times documentary filmed by Hong Kong director Kiwi Chow recorded seven groups of participants in the “Revolution of Our Times” movement. Some of them have lost contact or are serving jail sentences. The impact of Beijing’s National Security Law makes the film unlikely to be shown in Hong Kong.

Revolution of Our Times is the first large-scale documentary filmed by Kiwi Chow. It records the movement without a big stage and leader and covers key events, such as the occupation of the Legislative Council, the 7.21 Yuen Long attack, and the Hong Kong Polytechnic University conflict. The film contains more than two hours of footage. Some of it is quite distressing to watch.

The trailer on IDMB states: “Due to political restrictions in Hong Kong, this documentary following protestors since 2019, is broken into pieces, each containing interviews and historical context of the conflict.”

When the presenter of the Golden Horse Awards announced the best documentary winner, the audience applauded at length, and some even shouted “Come on Hong Kong.”

The award-presenting guest, Golden Horse-winning actress Chen Xiangqi, was a bit emotional and said that the Revolution of Our Times team could not come to Taiwan, so the director Kiwi Chow expressed his thoughts through the recorded video.

When Kiwi Chow shared his award-winning speech in Cantonese through the video, he choked up and couldn’t speak several times. First of all, he thanked Taiwan and the Golden Horse Award.

Chow expressed his gratitude to everyone who was interviewed and filmed in the movie. Among them was a 16-year-old student. Chow and the student were trapped in the Polytechnic University for several days. When this student returned to school, many people already knew he was involved in the revolution movement. “He entered the classroom shaking. He was very scared. Every student and teacher at the time hugged him, and the whole classroom was full of tears and crying.”

Chow said that he wanted to put this tear-jerking scene in the film, but he couldn’t do that. He hoped that the film could be like these embraces. He confessed that he cried many times in the process of making the movie. He could only rely on this film to comfort himself and to vent his anger and face the fear and trauma.

He also mentioned: “Those who are still in Hong Kong, including me, and those who are in exile and prison, even if you don’t have a chance to watch it, I pray to God that the existence of this movie alone can give you comfort and a hug.”

Chow said that at the end of the film, it stated simply “Production of Hong Kong People,” “The work belongs to every Hongkonger who has conscience, justice, and shed tears for Hong Kong.”

Except for director Kiwi Chow, all crew members in the production team are anonymous, and the ending subtitle was marked as “A Film by Hongkongers.”

Revolution of Our Times screened at the Cannes Film Festival

The 74th edition of the Cannes Film Festival took place between July 6 and 17 and provided a special screening of Revolution of Our Times. The synopsis included: “The 2019 movement is always labeled with the characteristics of “decentralized leadership,” “be water” (flexible tactics), “do not split,” and “blossoming everywhere” (protest all over the territory).

The film covers seven teams of protestors with different stories that put together a comprehensive picture of the versatile movement.” In an interview with Screen Daily, Chow stated: “I can’t hide my identity,” when news of his surprise selection in the Cannes Film Festival was announced.

On July 19, Hong Kong activist Nathan Law, who describes himself as exiled in London, tweeted: “Please #RT if you want to watch Revolution of Our Times. We all know China will intimidate any platform that hosts the movie. We are here to counter it, to demonstrate #PEOPLE’s #POWER, and support a genuine artwork that deserves praise.”

A tweet in response to Screen Daily’s news by M.K. Holmes said: “Respect Chow! Let’s not forget that draconian #NationalSecurityLaw could grant him in jail for 10 years or even for his whole life. Courageous. Please #StandwithHongKong and all those who contributed to this endless #FightforFreedom.”