Would You Buy Shoes That Are Biodegradable and Will Grow Into an Apple Tree? 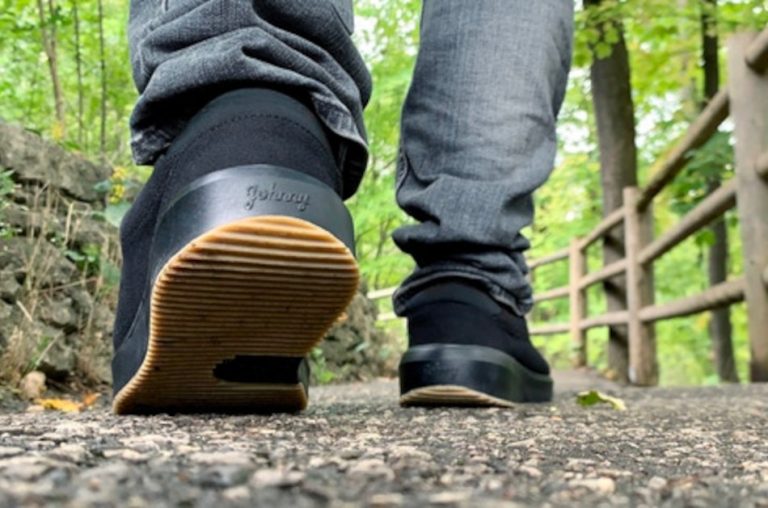 Johnny is 'the shoe that grows into a tree.' (Image: Luc Houle via Johnny Footwear)

When it comes to shoes, we all want a pair that not only looks good but that is comfortable, too. Unfortunately, those soft, cushiony materials found in most shoes today are made of plastic that will take about 1,000 years to biodegrade. Now, a fashion designer from Toronto named Luc Houle has come up with a revolutionary compound that will give you the comfort you expect from a modern sneaker while also being good for the planet.

The new shoe, called the “Johnny” in reference to Johnny Appleseed, will be made of canvas and there will be no plastic in it. Houle is bringing it to market through a Kickstarter campaign and has already exceeded his target of US$55,000. The sole of each shoe has an apple seed encased in fertilizer so that when you discard them, they can sprout an apple tree.

Houle says about the project: “The nice thing about this project is that because it’s a biodegradable sneaker that grows into a tree, we can kind of help number one, offset people’s carbon footprint, but we’re also helping eliminate plastics. And the more people we can reach with that, the more of an impact we can have.” (blogTO)

Biodegradable shoes will greatly cut down on plastics

You can pick either black- or white-colored shoes with red laces. A pair will sell for about US$130 and the casing will be recyclable as well. The Canadian origin fashion designer thought of developing the unique project after he observed the enormous waste in the fashion industry. Cheap sneakers are made using a lot of plastics leading to pollution on a global level.

The sustainable footwear he has created is fully biodegradable and beeswax-coated. Houle told Global News: “It’s completely organic uppers. There’s a cork insole that molds to your feet over time, then the midsole and outsole are made of a specific compound that biodegrades in about three years.” The shoe was made after three years of development.

He says “Johnny” shoes will not biodegrade when they are being worn. The shoes need a blend of 3 factors to biodegrade: naturally occurring microbes, pressure, and moisture. He advises people to plant their worn-out shoes in the ground. A depth of 6 inches should be good for the hidden seed to germinate. Additionally, the company will plant one tree for each pair of shoes sold.