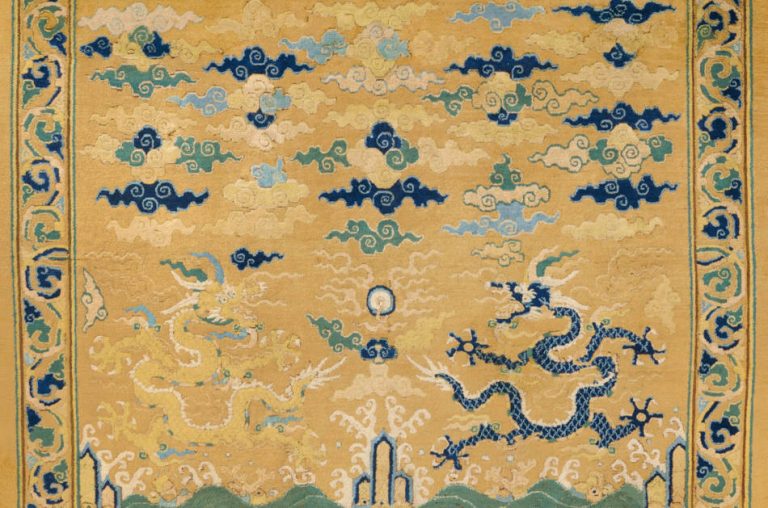 A rare carpet from Beijing’s Forbidden City that likely sat under the throne of the Ming emperors was sold for US$7.74 million at a Christie’s auction in Paris. (Image: via Wikimedia Commons)

A rare imperial throne carpet from Beijing’s Forbidden City that likely sat under the throne of the Ming emperors was sold for US$7.74 million on November 23 at a Christie’s Paris auction.

According to AsiaOne and foreign media news, the 16 foot 7 inch by 14 foot 7 inch carpet features two five-clawed dragons. A pearl adorns the center and flowing clouds are atop. The green undulations at the bottom of the carpet signify the earth. The shape and decoration of the intricately woven piece signaled that it was made to be placed under the emperor’s throne itself, showing the monarch’s divine rule.

“This is one of only seven complete dragon throne carpets that remain in Western collections. There are nine other carpets, but these remain within the palace museum in Beijing,” according to Louise Broadhurst, Christie’s Rug and Carpet Specialist (Wion).

Christie’s estimated the rare Ming Dynasty piece at between US$3.9 and US$5 million. The carpet was sold for US$7.74 million, making it the most expensive carpet ever sold by the auction house.

“Like all Ming carpets, this was once a dark imperial red which has now faded to a golden yellow. ‘The wool would first have been dyed yellow using safflowers,’ says Broadhurst, ‘then made red with brazilwood dye, which has oxidised and disappeared over the centuries.’” (Christie’s)

According to Broadhurst: “This carpet would have been woven specifically for a hall within the Forbidden City and as such would not have been seen by anyone outside of the palace walls,” (South China Morning Post). The carpet is one of only 39 Ming Dynasty carpets that exist today, and just 16 of them feature the highly-prized imperial dragon.

According to Christie’s website, woven carpets were linked to traditional Chinese nomadic culture using the wool from sheep and goats bred in the mountainous regions, including Mongolia. Carpets were used in a functional manner at court and Marco Polo (1254-1324) described how “most of the knights and barons sit and eat in the hall on carpets because they have not tables.”

The significance of dragons in the Ming Dynasty was that the auspicious symbol could only be used by the Chinese emperor. Double dragons chasing after a flaming pearl means perfection, prosperity, and good luck. It has connotations to Buddhism where it represents spiritual wealth.

The weaving techniques of Chinese carpets differ from those of Persian carpets through various knotting techniques, which included knot stacking, half knots, and single warp knots. The ability to use these different knots enabled the craftsmen to build up and create very expressive and intricate images, such as the five-clawed dragons on the Ming Dynasty Imperial Throne Carpet.

It is believed that the imperial throne carpet was bought in 1920 by an American couple on their honeymoon in China. They later loaned it to the Cleveland Museum of Art and then sold it in 1987 to a private collector in Switzerland, the current seller.

In October 2020, another Ming Dynasty carpet was sold for US$1.7 million. It was much larger than the piece sold this year, suggesting it was used in hallways and not a throne carpet, thus the price difference.