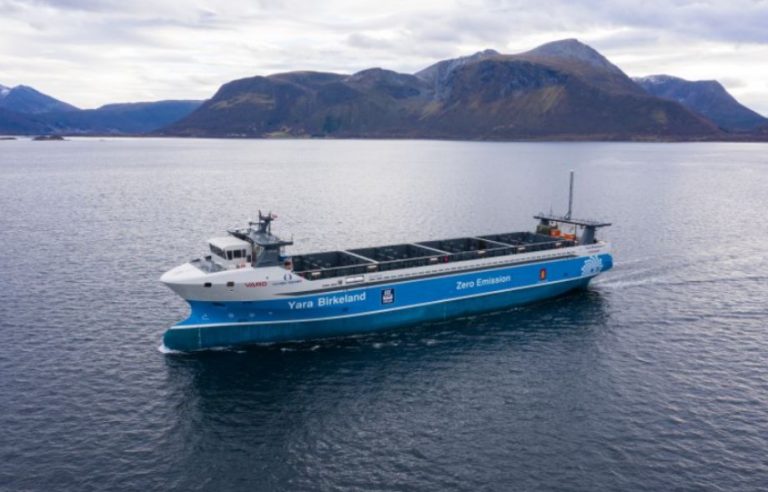 The ship was christened the Yara Birkeland and will be used for moving mineral fertilizer stocks between the ports of Brevik and Porsgrunn in Norway. (Image: via VARD)

The first-ever self-propelled electric container ship has made its debut in Norway. The electric autonomous container ship was constructed by Norweigan shipbuilder VARD. The ship was christened the Yara Birkeland and will be used for moving mineral fertilizer stocks between the ports of Brevik and Porsgrunn in Norway. The trip otherwise requires as many as 40,000 trips by trucks every year. This will not be required when the Yara Birkeland becomes operational. The result is a significant reduction in CO2 emissions.

The mammoth-sized ship made its crewed maiden voyage on November 19 and on board was the Norwegian PM, Jonas Gahr Store. It was a 43-mile trip from Horten to Oslo, Norway.

The CEO of Yara International, Svein Tore Holsether, said: “We have been looking forward to this day for a long time. This is an excellent example of green transition in practice, and we hope this ship will be the start of a new type of emission-free container ship. There are a lot of places in the world with congested roads that will benefit from a high-tech solution like this.”

The Yara Birkeland’s maiden voyage from Horten to Oslo, Norway:

The Yara Birkeland is 262 feet long and it has a powerful 6.8 megawatt/hours battery pack. This helps her attain a peak speed of 28 km/h. It can carry 3,200 tons worth of fertilizer. Once its advanced autonomous navigation technology receives its certification and clearance, the ship will begin commercial operations in 2022.

The Kongsberg Group deployed the technologies into the ship. CEO Geir Håøy said: “Norway is a big ocean and maritime nation… the project demonstrates how we have developed a world-leading innovation that contributes to the green transition and provides great export opportunities for Norwegian technology and industry.”

A lengthy learning process ahead

The Yara Birkeland will undergo intensive working trials and they will be necessary to polish its autonomous sailing capabilities. She will eventually make the 13.89 km trip using its sensors, minus manual intervention.

The distances covered by the electric container ship are short, but that does not mean it will not have to cope with obstacles and override them. The hurdles include sailing through a narrow fjord, passing under two bridges and coping with merchant ship traffic, etc. The destination is one of the busiest ports of Norway as well, so she will have many hurdles to overcome on the way.

Jostein Braaten, the Yara International project manager, said various types of mishaps take place on large ships owing to human errors. An autonomous ship will not be affected by these issues. Autonomous operating will be a safe option.

Braaten said: “First of all, we have to detect that there’s something there. We have to understand that it’s a kayak, then we have to determine what to do with that. Currently, large vessels don’t do much with a kayak. They can’t do much. They can warn, but they cannot maneuver away or reverse to avoid an incident.”

A pioneer in autonomous vessels

Aboard the electric container ship, there is no traditional machine room and 8 eight battery compartments sit there drawing the power from renewable hydroelectricity. The power can be compared to that of 100 Tesla cars. The maritime sector contributes to man-made emissions and efforts are being made to reduce its carbon footprint.

While Yara Birkeland’s contribution to this may be frugal, she may serve as a pioneer. To enable large vessels to be run by green energy, the ports must be laden with the necessary infrastructure. Small-sized electric ferries are now seen a lot in Norway, but a large ship driven by electricity is a rarety for now.