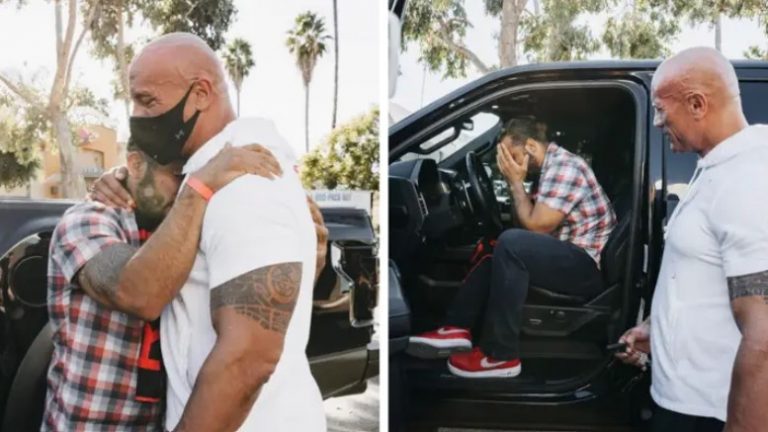 Dwayne 'The Rock' Johnson presented one of his fans his personal truck, a Ford F-150 Raptor. (Image: via Twitter)

Actors and celebrities are envied by many for their wealth and luxurious lifestyle. However, some of these icons and celebs are also very generous and they do not hesitate to do the needful for their fans who appeal to their emotions. One such example is Dwayne Johnson. Popularly known as The Rock, he has featured in several Hollywood blockbusters and action films to date. However, his recent act proves that The Rock is not all about making money and baring his torso in Hollywood flicks from time to time!

The special gift from The Rock

Recently, Dwayne “The Rock” Johnson did something that stunned his fans. He presented his truck, a Ford F-150 Raptor in a customized avatar, to one of his fans. The Navy veteran receiving the unique gift was delighted and amazed at the same time.

The event was a special thanksgiving screening for The Rock’s recent film Red Notice, set in Los Angeles. The actor felt like gifting a car to a special fan at the movie screening. He originally wanted to give him the Porsche Taycan used in Red Notice. When the carmaker denied it, he went ahead and gifted his Ford truck.

The fan was former US Navy veteran Oscar Rodriguez and The Rock sprung a surprise for Mr. Rodriguez at the film’s screening. He told the audience members about the good deeds of his fan and then surprised them all by showing them the truck outside the venue. This was not expected and everyone was curious to be sure.

Mr. Rodriguez was the most curious and was surprised and overwhelmed when he was handed the keys and hugged his idol three times beside his new gift. While Mr. Rodriguez was overwhelmed by the kind gesture of his idol, others also showered praise on him for the generous act. The fans of the actor shared the event on social media platforms. Among them was Jim Farley, the CEO of Ford who tweeted his support of the actor.

Who is Oscar Rodriguez?

Mr. Rodriguez owns a gym in South Park, San Diego, and was very involved in the community, including rallying people for toy and shoe drives and working with the Urban Street Angels, a young homeless outreach program. He is also a U.S. Navy veteran and does community service with his church, including with an organization called HOPE worldwide, which helps those in poverty. He also traveled to Tijuana, Mexico, to help children in orphanages.

The actor found out information on the fans who attended the special screening and decided the one chosen deserves to be applauded for his generous and humanitarian acts, among them was Mr. Rodriguez.

It remains to be seen if the actor buys a new truck after giving the black F-150 Raptor to his fan. The truck in question is a mighty one, powered by a 3.5-liter V6 engine and it also has a 10-speed automatic transmission unit. An Instagram video showing the emotional moment shared by The Rock and his fan has gone viral.

The star said in a post following the gift: “That was pretty special. What a good guy, who does so much for so many people… It’s an honor to give a little bit of joy to someone who deserves probably a lot more than just my truck. And now I can figure out how I’m getting home because I don’t have my ride!”