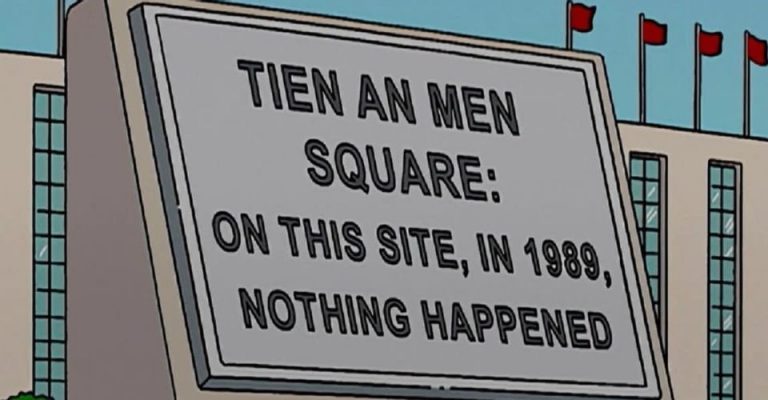 In a close-up shot, a sign can be seen saying: 'On this site, in 1989, nothing happened,' ridiculing China's efforts to hide the truth of what transpired that day. (Image: via Fox)

In the latest censorship move designed to appease the ruling Chinese Communist Party (CCP), Disney removed an episode of its hit TV show The Simpsons owing to content that it apprehended may annoy the CCP.

In episode 12 of the renowned cartoon entitled “Goo Goo Gai Pan,” the family travels to China because Marge Simpson’s sister, Selma, wants to adopt a baby. At one point, the Simpsons stopped by Beijing’s Tiananmen Square, where the Chinese Communist Party violently cracked down on pro-democracy protesters in 1989.

In a close-up shot, a sign can be seen saying: “On this site, in 1989, nothing happened,” ridiculing China’s efforts to hide the truth of what transpired that day. Later, Selma is depicted standing in front of a tank, a nod to the famous “Tank Man” photo from the Tiananmen protests.

The withdrawn 12th episode of The Simpsons has many other scenes that would make the CCP angry if it was aired. The family sees the mummified remains of Mao Zedong and there is a reference to the leader describing him as a killer. The reference is about the famine that hit the country in 1959. The episode also makes references to religious oppression in Tibet.

The removal of the episode of The Simpsons was noticed by the fans of the series and soon it became a hot topic on most social media platforms. It is not known whether Disney+ deleted the episode of its own volition, was ordered by Chinese authorities to remove it, or whether the episode was even originally available in Hong Kong.

Disney’s long history of kowtowing to the CCP

Disney has a long history of censoring its films to remain in the CCP’s good graces.

Disney’s original animated Mulan (1998) was an outstanding success, inspired by the story of a young woman in imperial China who took her injured father’s place in the army. Hua Mulan’s story is often seen as a culturally immersive tale meant to engage and delight — but for the 2020 live-action production, the charm ends at the credits.

At the very end of the film credits in the 2020 live-action production of Mulan, Disney thanks eight government entities in Xinjiang, the far western Chinese region home to 12 million Uyghur Muslims. The named parties include the security bureau in Turpan, eastern Xinjiang, and the “Publicity Department of CPC (Communist Party of China) Xinjiang Uyghur Autonomous Region Committee.”

In 1996, the company was blocked from the Chinese film market after it produced Kundun, which displays the Chinese oppression of the Tibetan people. In 1998, then Disney CEO Michael Eisner apologized for the movie, calling it “a form of insult to our friends.”

The studio even went so far as to hire legendary Secretary of State Henry Kissinger to help manage the fallout. The movie continues to be stigmatized today and is not available on Disney+.

Seeking a heavy hand in the portrayal of Chinese culture and continuing to punish the studio for Kundun, the CCP forced Disney to jump through hoops to stream the original 1998 Mulan to public Chinese audiences.

The release of the 1998 Mulan was only allowed after Disney bought the foreign distribution rights to two Chinese films, hired a Chinese performance group for Mulan’s European release, and offered the idea of opening a theme park in China (now Shanghai’s Disneyland).

The Disney+ platform started its journey in Hong Kong a few weeks ago and it’s obvious the company has once again decided to play it safe by kowtowing to CCP demands by censoring its content.