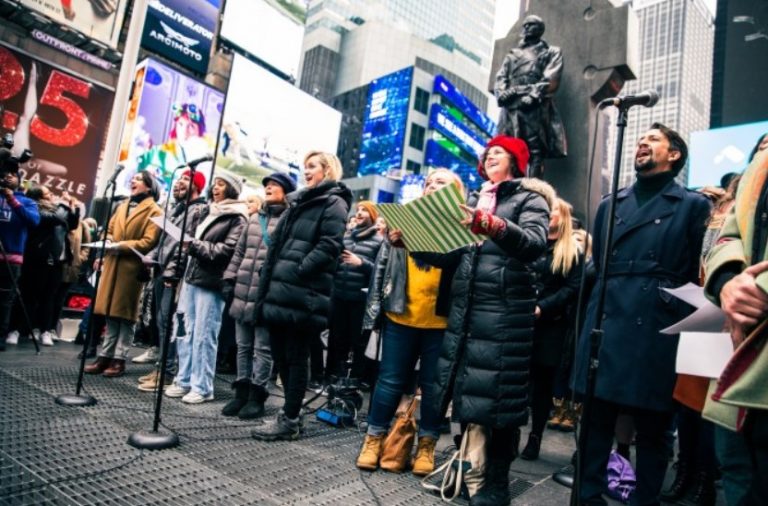 A luminous performance at Times Square took place to pay tribute to the iconic Stephen Sondheim and prominent Broadway stars were at the venue. (Image: Marc Franklin via Playbill)

A luminous performance at Times Square took place to pay tribute to the iconic Stephen Sondheim and prominent Broadway stars were at the venue. Of special mention are Josh Groban, Sara Bareilles and Lin-Manuel Miranda. The musical theater icon passed away at his home in Connecticut at the age of 91. He passed away on November 26, just one day after celebrating Thanksgiving.

Dozens of awards and accolades

Stephen Sondheim’s first work as a composer-lyricist was A Funny Thing Happened on the Way to the Forum, for which he also won his first Tony for Best Musical. Other Tony Awards followed for the scores of Company, Follies, A Little Night Music, Sweeney Todd, Into the Woods, and Passion.

In addition to eight Tony Awards, including a 2008 Lifetime Achievement Award, Sondheim was awarded a Presidential Medal of Freedom (2015) and the Kennedy Center Honors (1993). His accolades include a Pulitzer Prize (1985), an Academy Award, eight Grammy Awards, and the 2011 Olivier Special Award. Theaters named in his honor have stood on Broadway since 2010 and London’s West End since 2019.

The Broadway community remembers the stalwart and their love and feelings for Sondheim were signified by the tribute. The stars performed a rendition of Sunday in the Park with George.

The videos posted on the social media channels show how emotional the performers became during the performance. The musical event was organized by Erich Bergen, a noted Broadway actor. Broadway also honored the composer with a traditional light dimming as all marquees went dark for exactly one minute on December 8.

Praised for having reinvented the American musical

Stephen Sondheim is known for reinventing and infusing new life into American musical theater with his amazing and soothing musicals. A Little Night Music became a huge hit and its song Send in the Clowns was recorded by more than 900 performers, including Frank Sinatra.

Barbra Streisand, who recorded eight Sondheim songs on her landmark 1985 collection, The Broadway Album, celebrated the great artist’s life and expressed gratitude that he got 91 years. Bernadette Peters, who was in the opening night cast of Sondheim’s Sunday in the Park With George and Into the Woods, as well as revivals of Gypsy, A Little Night Music, and Follies, shared that she was sad to lose her friend, who gave her so much to sing about.

Sara Bareilles said at the Times Square tribute: “This felt like church. In his remembrance, we did what theater does best. We sang and raised our voices and came together in the community. We don’t know what we mean to each other. We can’t possibly. It is everything. I am thankful for this warm, kind, musical heart made of theater-going, loving, leading souls that are beating on this not-so-ordinary Sunday.”

Choosing the song from Sunday in the Park with George was perfect for the moment. After singing the song, Josh Groban said: “The song is about capturing precious moments of life and enjoying these at the right time. It reflects the creative spirit of the composer in a way.”