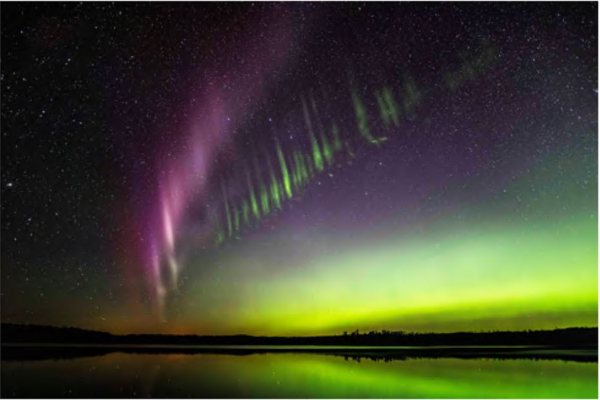 For years, amateur aurora watchers from Canada have noticed mysterious streaks of pale purple and green light that seemed to dance across the nighttime sky. But it wasn’t until 2016 that they shared their colorful images with scientists, who soon identified the light show as a new type of upper-atmosphere phenomenon that was jokingly named STEVE.

Additional contributions from citizen scientists are now helping researchers identify different types of STEVE emissions and constrain how and where in Earth’s atmosphere they’re generated. Xiangning Chu, a researcher at the Laboratory for Atmospheric and Space Physics at the University of Colorado Boulder, said:

“Scientists have known for several years that STEVE is not a regular type of aurora because it appears in lower latitudes and features different colors. But exactly how these light emissions form high in Earth’s atmosphere remains a mystery.”

STEVE, which was given the backronym Strong Thermal Emission Velocity Enhancement, typically appears as a narrow purple band arching across the sky. This ribbon is sometimes accompanied by rippling green lights that look like a picket fence in photos. Because the purple and green lights don’t always appear together, Chu wanted to determine whether the two lights share the same driver, but he wasn’t sure how to do this — until a lucky coincidence occurred on July 17, 2018.

That night, two citizen scientists located 400 kilometers apart snapped images of the same STEVE event. Because the photos were taken simultaneously from two different angles, Chu and his team were able to perform a simple triangulation, which provided them with the exact location of each point in the images.

The researchers then analyzed this information to try to resolve the location of STEVE’s driver. Chu said:

Researchers already knew that the green “pickets” follow Earth’s magnetic lines. What the analyses by Chu’s team show is that the purple and green emissions are located along the same magnetic field lines, though at different altitudes. Because they follow the same field lines across an extensive altitude range, Chu says there is no known local mechanism in the ionosphere that can account for them:

“Our analysis indicates that both the purple and green STEVE emissions are driven by the same, narrow region, so it must be the magnetosphere. This supports our previous study, which provided evidence that STEVE’s driver region is located at a sharp boundary in the magnetosphere that’s marked by strong waves and particle acceleration.”

The coupling of the ionosphere and the magnetosphere is one of the fundamental topics in space physics, although this process is usually only considered at high latitudes, where auroras occur. But Chu says their results indicate that strong coupling might also occur at lower latitudes, transporting vast quantities of energy and momentum between the magnetosphere and ionosphere. According to Chu, this research would not have been possible without the citizen scientists’ help, saying:

“I want to thank Neil Zeller and Colin Chatfield, who were so nice to provide their photographs for this analysis. I encourage other citizen scientists to submit their images to the Alberta Aurora Chasers FaceBook group.”

There are still many unresolved questions about STEVE, including how it’s generated, says Chu, and citizen scientists will likely continue to play an important role in this research. Chu added:

“We are limited by the number of STEVE events and appropriate observations.  This is a brand-new mechanism that has never been reported before. If we can solve this, we’ll have more information to add to our textbooks.”

Provided by: University of Colorado at Boulder [Note: Materials may be edited for content and length.]