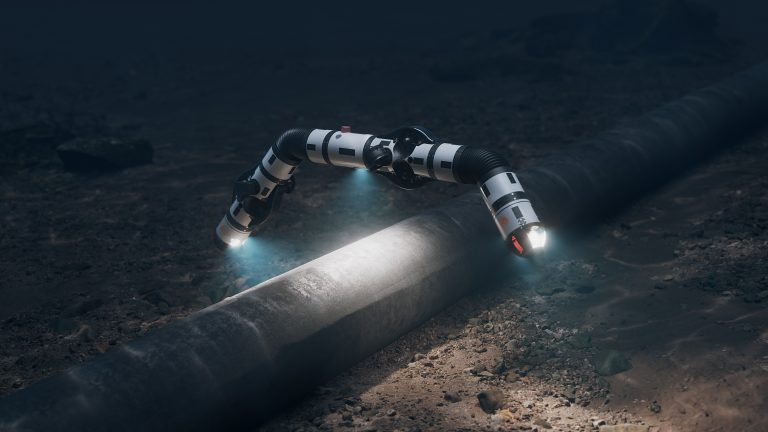 Eelume vehicles are basically self-propelled, autonomous robotic arms whose slender and flexible body can transit over long distances and carry out subsea inspection, maintenance and repair in confined spaces not accessible by conventional underwater vehicles. (Image: via eelume.com)

As you watch Eelume move its long black body underwater with its glowing eyes, nobody would think differently of you if you were a little unnerved — but don’t worry, it’s just a robot.

The robot is a self-propelled aquatic mechanical snake designed for inspection work and basic repair jobs on the seafloor. Eelume developed the snake, a Norwegian company but has now partnered with Norwegian companies Statoil and Kongsberg Maritime to fast-track production.

These serpents can swim around undersea equipment, perform inspection duties, and do simple maintenance and repair tasks like cleaning and adjusting valves, among other chores. The developers believe that because they can swim on their own — similar to a sea snake — or use thrusters for propulsion, they will play an essential role in reducing the cost of maintaining equipment and reducing the need for large underwater vessels.

“Eelume is a good example of how new technology and innovation contribute to cost reduction. Instead of using large and expensive vessels for small jobs, we now introduce a flexible robot acting as a self-going janitor on the seabed.

To support smaller companies in bringing new technology to the market is an important part of our research portfolio.”

Because of its slender and flexible body, the Eelume robot can provide access to confined areas that are difficult to access with existing technology. The idea is to have these robots permanently installed on the seabed where they can perform planned or on-demand inspections, and then perform interventions where needed.

Although the makers have yet to disclose any of the details about the aquatic snake, it can be clearly seen that they are not self-powered yet. Having wires coming from the robot would certainly limit its range and possibly cause entanglement problems. However, watching their concept video, it’s clear to see the designers are hoping to do away with the power cables.