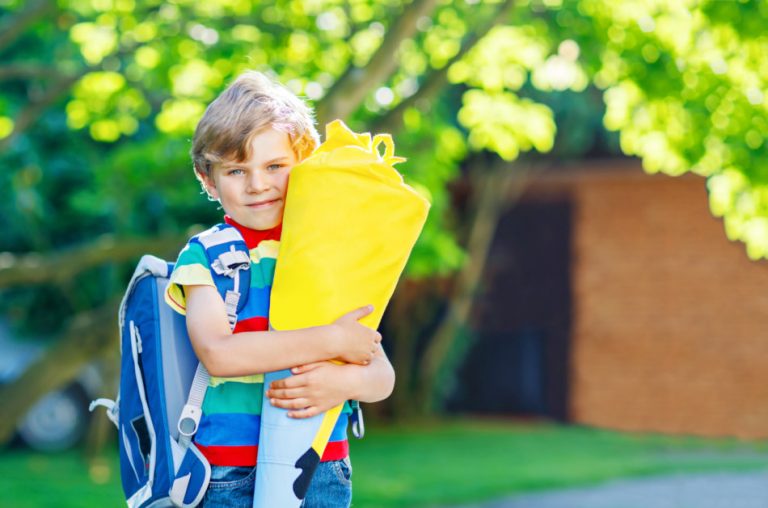 German parents give their children a cardboard cone filled with toys and sweets on their very first day of school. (Image: Romrodinka via Dreamstime)

Going to school can be a mixed-bag experience for most children. It is the beginning of a new phase in life for them. Some may become nervous or get anxious about it. For kids born in Germany, going to school for the first time tends to be a different experience, though. German parents offer their kids sweet-filled school cones at this juncture of their lives. This act carries a surprisingly powerful message.

In some parts of Germany, the German school system also acknowledges the tradition. In some regions, a ceremony is held at the schools and parents arrange for a party at home. School cones are referred to as Zuckertüte, or sugar cones, in some regions in Germany. According to folklore, it is Saxony, in eastern Germany, where this custom was started. Earlier, school cones were filled with dried fruits and raisins. Nowadays, school cones can be quite big and have flashy designs.

School cones are a rite of passage in Germany

Christiane Cantauw, a German historian and folklore expert, says: “The school cone is a traditional rite of passage. The child is leaving the early years behind and entering the school years, and this fact is taken very seriously in Germany. And the tradition makes that clear.” She adds: “Through the transition to school, the child detaches a little bit from the family unit. And with the cone-giving custom, the family creates a reconnection and conveys that ‘yes, you’re now a schoolchild, but you’re still part of our family. We support you and accompany you on this new path, just like we did before.'” (BBC)

A Hamburg-based retired teacher, Hans-Günter Löwe gets nostalgic as he recalls his own memories of being gifted a school cone several decades back. He grew up in the aftermath of World War II when Germany was trying to put its broken pieces back together. He told the BBC: “My mother sewed me a jacket from scraps of fabric, I’m wearing knitted knee-high socks in second-hand boots, and I’m holding a homemade school cone decorated with shiny foil. Somehow, my mother managed to make one.” Löwe wonders how she pulled it off in such hard times while looking at a yesteryear picture. He has written a book on the much-loved custom and collected a number of amazing antique school cones.

While the school cones evoke an aura of parental love and care, they also reflect the tumultuous history of Germany in a way. In the Nazi regime, some school cones were decorated with swastikas. Some kids sent photos of their school cones to their fathers on the battlefield during World War II. Even after Germany was divided, the residents did not abandon the tradition. However, in the Federal Republic, school cones were rounded and in eastern Germany, they were made more angular. Even after decades of reunification, subtle differences exist. West Germans like designing their school cones while the East Germans prefer buying the readymade ones.

The psychologists think the root of the custom is in the effort to ward off the anxiety and worry that affects the mindset of kids when they are sent to school for the very first time. The ritual makes the process of getting accustomed to a new place better. While parents in other countries do not offer their school-going kids treat-filled school cones, there are similar customs. In the UK, parents get new shoes and school uniforms for the kids, while Japanese parents get them a new randoseru, a type of school bag.