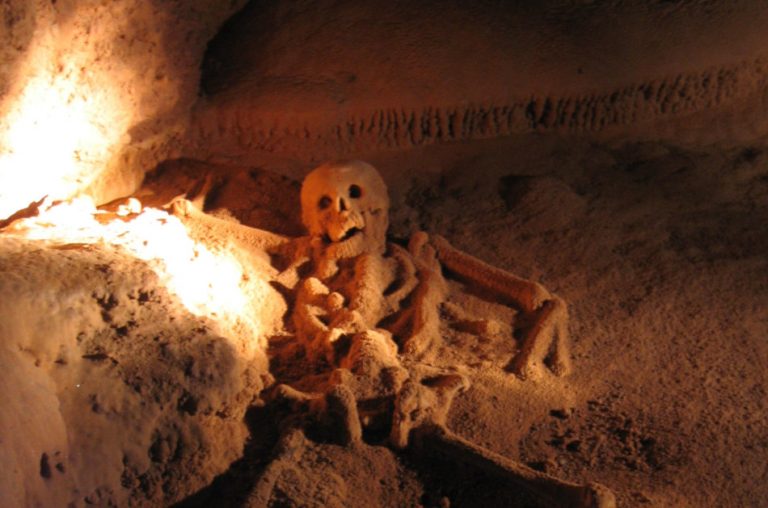 In the heart of Belize, lost in its jungle, lies a mysterious cave containing a skeleton known as the 'Crystal Maiden.' (Image: Peter Andersen via Wikimedia)

In the heart of Belize, lost in its jungle, lies a mysterious cave that when talked about seems to have come straight out of an Indiana Jones movie. Within the cave, there are artifacts as well as several sets of human remains, one of which is called the “Crystal Maiden.”

The site is called Actun Tunichil Muknal (ATM), which literally translates as “Cave of the Crystal Sepulchre.” The locals sometimes refer to it as Xibalba (Mayan for the underworld). It is an ancient Maya temple that holds thousands of secrets — secrets that thousands of people come to see each year.

It remains unclear why the skeletons are in the cave, although many believe that they were part of human sacrifices, perhaps made to please the rain god Chac or even the gods of the underworld.

However, there are other theories suggesting that they may have been accused of witchcraft (possibly suffering from mental or physical ailments), with their bodies being left unburied so that their spirits would remain trapped inside the cave.

The youngest skeleton found is that of a 1-year-old infant. There are other infants entombed in the cave, with their ages ranging from 1 to 3 years old. Some have been placed in cracks in the walls, while others are in narrow adjoining chambers. Other skeletons of children include a child around seven and a teenager that seems to have been killed while being bound.

However, the teenager was not the only resident to have suffered a horrific end, with a majority of the skeletons appearing to have suffered from blunt force trauma to the head. Skulls have been completely crushed in some cases.

Among the younger skeletons, where the skull is still intact, there is evidence of “skull shaping” (cranial deformation) this gives an elongated look to the skull, which made them seem somewhat alien.

All of the remains inside Actun Tunichil Mukna have an unusual eerie glittering appearance. Because of the calcification process of the cave itself, the remains have been “cemented” to the floor by calcite. There is one example of this process that has made the site famous, and that is the “Crystal Maiden.”

The remains are called the “Crystal Maiden” because the skeleton is completely calcified and sparkles in the light, similar to crystals. The skeleton was thought to be of an 18-year-old girl, but it has only recently been suggested that it may actually belong to a teenage boy; however, the name “Crystal Maiden” has persisted.

Just to add to the eeriness, as you make your way through the passageways, you will see rudimentary stone altars, as well as cave formations carved by the Maya, such as silhouettes of faces and animals on the cave walls. All these ancient alterations were crafted by human hands, giving the cave its eerie character.

Other items found include ceramics and stoneware; some marked with “kill holes” intended to let spirits escape. One artifact, known as a “Monkey Pot,” is one of only four of its type in the whole of Central America.

Because of the inaccessibility and the calcification process of the cave, most of the relics have been preserved just as they were left with very little having been removed from the cave since its discovery. The pottery found dates from between A.D. 700 and 900 and is likely to be from around the same time the bodies were sacrificed.

Actun Tunichil Muknal was first explored in 1989, with the ATM giving us a glimpse into what life was like when Maya culture was in its prime. This is also one of the best-preserved caves in the world from that period in history.

Traditionally, the Crystal Cave was believed to be a gateway to hell, with a deep crack in the Earth that was filled with rivers of blood and scorpions. This was the home of the Maya death gods, the subterranean court of the “Lords of Xibalba.”

They were often referred to as demons, having names such as “Stabbing Demon” and “Skull Staff,” and these 12 deities would cause a range of conditions on people including sickness, pain, and fear.

Explore the cave with Trans-Americas Journey: