Rock Kept for Years Found to Be Rare Meteorite 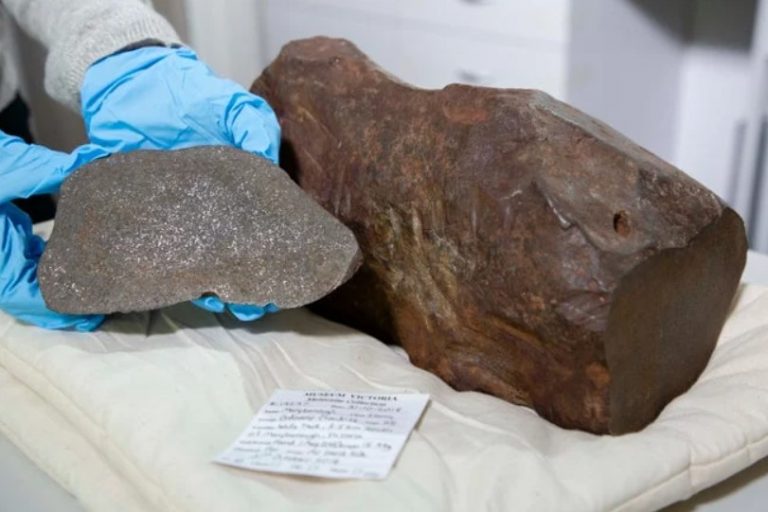 Victoria resident Dave Hole had stumbled upon a 4.6 billion-year-old meteorite just outside Maryborough in 2015. (Image: via Melbourne Museum)

The Melbourne man could never have guessed the rock he just found was actually a rare meteorite. Sometimes, people receive certain things in life unexpectedly and these turn out to be of greater worth than they had ever thought. This is what happened to an Australian man named David Hole. He was exploring the Maryborough Regional Park adjacent to Melbourne. His metal detector picked up signals from an object and that drew his curiosity.

He thought it could contain gold and so took the rock home. There was a reason behind thinking so. Marlborough is located in Australia’s Goldfields region and this is where the gold rush of Australia peaked during the 19th century.

The man’s rock could not be broken

After taking the rock home, Hole tried a lot of methods using various tools to break open the object. He tried cracking it with a rock saw and also used an angle grinder. He did not even spare using acid to melt the surface! However, his efforts were futile, and using a sledgehammer did not bring any success. He was annoyed and amazed at the same time to find that the object was nearly indestructible. However, the truth unfolded a few years later. He came to know the rock was no ordinary stone or anything containing gold either, but was, in fact, a rare meteorite.

Man discovers his rock is a rare meteorite

Since Hole could not break the rock, he took it to the Melbourne Museum to figure out its nature and origin. That is when he came to know about the rock’s celestial origin. Dermot Henry, the Melbourne museum geologist, said: “It had this sculpted, dimpled look to it. That’s formed when they come through the atmosphere, they are melting on the outside, and the atmosphere sculpts them.” He has more than 3 decades of experience in examining various types of rocks.

The geologists said meteorites tend to be heavier than regular rocks found in the wilderness. The rock in question weighs 37.5 pounds. A small slice of it was cut using a diamond saw and the geologists saw there was an elevated amount of iron.

Henry added: “Meteorites provide the cheapest form of space exploration. They transport us back in time, providing clues to the age, formation, and chemistry of our Solar System (including Earth). Some provide a glimpse at the deep interior of our planet. In some meteorites, there is ‘stardust’ even older than our Solar System, which shows us how stars form and evolve to create elements of the periodic table. Other rare meteorites contain organic molecules such as amino acids, the building blocks of life.”

The researchers are of the view this meteorite is quite rare and so it is of immense value to science. This happens to be the 17th meteorite discovered in Victoria. However, this rare meteorite might be 4.6 billion years old. It has been named after the place of its discovery — Maryborough.