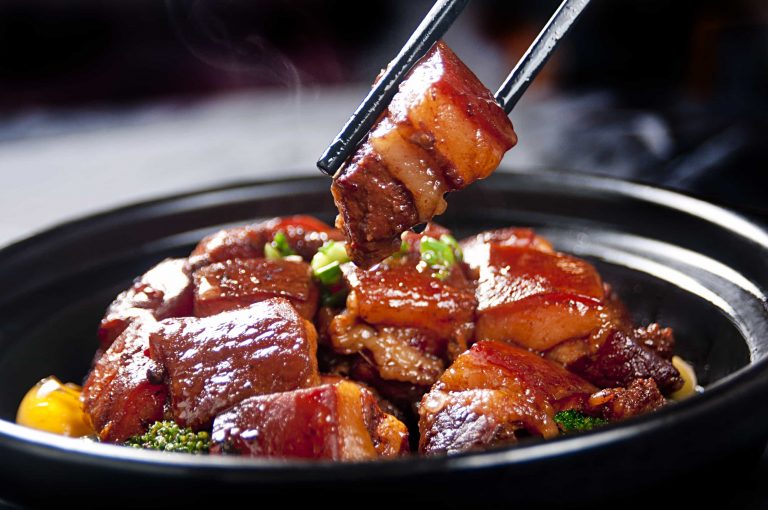 It is an interesting fact that pork brings good luck because when a pig eats, it moves its body forward at the same time. (Image: Wufang via Dreamstime)

As the old saying goes, time flies, and as 2022 approaches, many people will be considering how to make changes for the New Year. Superstitious or not, the first day of the New Year may be a better time to stick to your wishes if you enjoy foods that bring good luck.

To celebrate the arrival of the New Year, people everywhere eat their traditional good luck foods on New Year’s Eve to wish for good luck, business success, peace, and health for the whole family in the coming year.

It is an interesting fact that pork brings good luck because when a pig eats, it moves its body forward at the same time. In addition, the round, plump body of the pig symbolizes a full purse and good fortune, and because pork is rich in fat, dishes prepared with it are more delicious.

There shouldn’t be anyone who doesn’t like to start the year off with green, as the most popular banknotes are currently green, as well as lucky grass and Chinese jade ornaments. It is said that eating green foods for the New Year will bring fortune. If this is true, add leafy greens such as collard greens, baby cabbages, and beans to your New Year’s Eve dish for both good fortune and good health, and try stir-frying collard greens with grated ginger and bell peppers.

Lentils are eaten on New Year’s Eve in Italy. Long ago, the Romans would fill leather bags with beans and pray that they would turn into gold coins, as the beans resemble coins in appearance and symbolize wealth, especially as they swell when soaked in water, symbolizing prosperity. In winter, they are perfect for eating hot with noodles, and on New Year’s Eve, you can cook everyone’s favorite lentil and tomato noodles with meat sauce.

The yellow, rustic American cornbread is one of the foods that symbolizes wealth. There is an American slang saying that beans represent coins, greens represent American money and cornbread represents gold. Why not add green kale to your cornbread, then it will have a double meaning of wealth.

It is said that eating a whole fish with a head and tail on New Year’s Eve will bring good luck in the coming year, and that fish tend to swim in schools to symbolize a good harvest. On New Year’s Eve, you can grill a trout, rub the whole fish with olive oil, sprinkle it with salt and black pepper, and leave it to rest for a while. Then sprinkle fresh oregano leaves, thyme, and finely chopped shallots on both sides of the trout and thinly slice a lemon, and place it in the belly.

According to German and Eastern European traditions, a bowl full of sauerkraut is prepared to celebrate the New Year as a symbol of wealth, a tradition that still exists among German Pennsylvanians. Sauerkraut is made from shredded cabbage — the longer the shredded cabbage, the longer the life expectancy, and the more sauerkraut eaten on New Year’s Eve the more money you will have in the coming year.

A round cake is a symbol of unity. This tradition comes from Greece, where the locals bake a traditional Vasilopita cake on New Year’s Eve, with coins hidden inside. If you eat a piece of cake that happens to contain coins, you will have good luck for the whole year ahead. Just mind your teeth when you chew or it could end up with a costly visit to the dentist!

For dessert after New Year’s Eve dinner, consider a pomegranate Pavlova cake sprinkled with pistachio pieces, honey, and pomegranate seeds. Pomegranates are often used as a festive fruit and in countries around the Mediterranean, when the New Year’s bell rings, pomegranates are thrown at the front door, the seeds symbolizing fertility, and the more seeds that fall out, the greater the blessing. It is recommended to put the pomegranates in a transparent plastic bag before breaking them so that they do not stain and the broken ones can be used to make cakes.

Hoppin’ John is a southern American dish of black-eyed peas (also known as Eyebrow beans) with pork, celery, and onions. This New Year’s Eve, try the colorful black-eyed peas, which are already rich in fiber and protein, and add red bell peppers, carrots, and kale, and replace the white rice with brown rice for a nutritious and colorful upgrade. This traditional dish has its origins in the Jewish New Year and has been served for 1,500 years, not only to bring good luck for the coming year, but also to eat healthily.