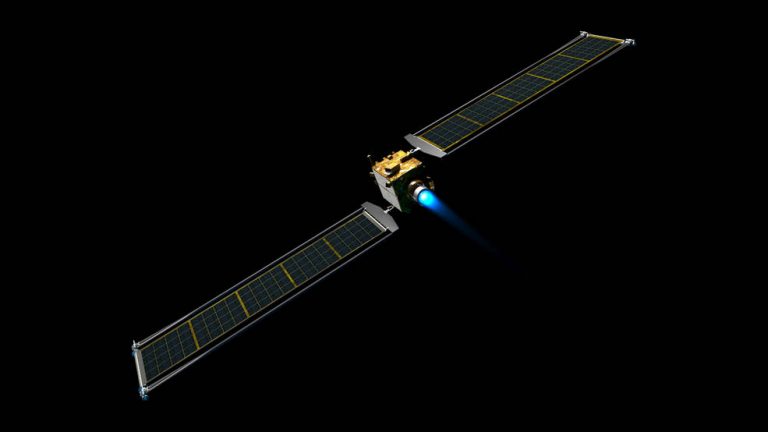 Illustration of the DART spacecraft with the Roll Out Solar Arrays (ROSA) extended. Each of the two ROSA arrays in 8.6 meters by 2.3 meters. (Image: via NASA)

Throughout Earth’s long history, many asteroids or meteorites have crashed into the Earth and some of these incidents are often linked with the eradication of certain animal species from the planet. Sometimes, such celestial objects only scrape past the planet by a small margin. Thus, NASA wants to test its asteroid defense system.

With advancements in the fields of technology and space science, humans have tried to bolster defense systems to thwart asteroids that have the potential of destroying habitats and causing significant damage. NASA has played a key role in developing such defense systems. In the latest development, NASA launched a special spacecraft using the SpaceX Falcon 9 rocket from California’s Vandenberg Space Force Base.

The Double Asteroid Redirection Test (DART) is meant for deflecting asteroids that may come too close to Earth’s atmosphere and may cause damage if they get caught by the gravity of the planet. Scientists in California have made experiments or simulation tests by firing projectiles at meteorites to alter their courses.

One such potentially risky asteroid is named Bennu, which has a chance of clashing with the Earth, say some scientists. The asteroid is one-third of a mile in width and so it is capable of causing significant damage if it collides with the planet.

Scientists have been carrying out experiments to devise an effective way of stopping an asteroid from clashing with the Earth. Earlier, they thought using methods to blow such cosmic objects into small pieces would work. However, the downside of that method is the small pieces can still gravitate to the Earth and cause serious damage to human life and properties.

The more recent method chosen by NASA is called kinetic impact deflection. It involves firing projectiles into space at high speeds to hit the target and make it deviate from its original path so that it does not hit the planet.

The Meteoritical Society’s 84th annual meeting was held recently in Chicago and it was presided over by State University of New York’s Dr. George Flynn. He said the tactic is using multiple objects to hit the asteroid to make it deviate from the original path.

The researchers involved with NASA have been using small, spherical aluminum projectiles to simulate firing at meteorites. They have to assess the composition of an asteroid to figure out at which speed the projectiles should be thrown at it. This is crucial as an improper speed will blow the celestial object to pieces.

NASA’s recent study on Bennu hints that it is 99.9 percent certain that Bennu will not collide with the Earth in the next 300 years, but it still wants to take no chances. NASA, however, made a statement, saying: “Although the chances of it hitting Earth are very low, Bennu remains one of the two most hazardous known asteroids in our solar system, along with another asteroid called 1950 DA.”

The recently executed DART experiment is important for NASA. If the robot spacecraft collides with the moonlit Dimorphos at a speed of 15,000 mph and deviates from its path marginally, that will give the scientists the courage to follow the formula when a comet or asteroid gets dangerously close to the planet.

The DART payload can be compared to a small car. The rocket will carry the spaceship into deep space and it will cover a distance of 6.8 million miles. A mini-spacecraft will be used to record the impact of the collision.

The asteroid that is being targeted by DART is not risky as such. It is way smaller than the cataclysmic Chicxulub asteroid that is said to be the cause behind the extinction of the dinosaur species some 66 million years ago.

The DART project cost is pegged at approximately US$330 million, which is lower than some of NASA’s more ambitious missions.