The Traditional Technique for Harvesting Sea Salt by Hand in Japan 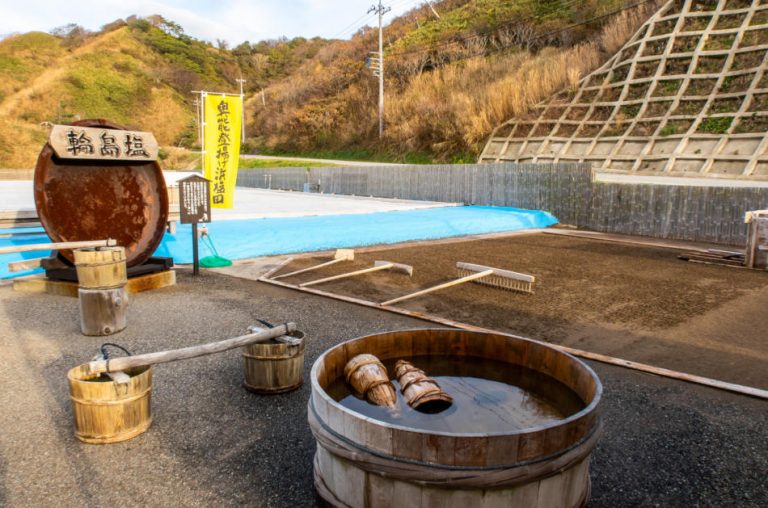 Sea salt is harvested by hand in the Noto Peninsula of Japan using traditional tools. (Image: Aleksandra Tokarz via Dreamstime)

Japan is a country known for its technological prowess and rich heritage of handicrafts and arts. However, little is known about one ancient tradition of Japan, that of harvesting sea salt by hand. In some regions of Japan, harvesting sea salt by hand is still practiced and the quality of salt made by the method exceeds that of salt generated elsewhere through machinery. The Noto Peninsula is a region where the soil is not exactly suited for harvesting crops, so the farmers resort to hand-harvesting salt here. They have been doing so for at least 4 centuries.

The agehama-style salt farming in Japan is popular and it is said that salt harvested using this method is of great quality. These farmers use ocean water and then boil that in huge-sized pots. As the salt crystals start forming they scoop out and dry them further. Salt harvested by this method is used mostly for cooking but it is also used for skincare.

The origin of salt production in Noto can be traced to the fifth century and in those days, people made use of small ceramic pots to boil seawater. That method, however, did not survive the test of time. Now, the agehama style that was invented during the 8th century prevails. In this style, salt is produced in two steps. At first, water collected from the sea is spread on sandy terraces for evaporation. Then, the water is boiled using specially designed pots.

While the Japanese monarchs had control over traditional-style salt production, that came to an end in 1868 when the Meiji Restoration ended the era of feudalism in Japan and, along with it, the clan monopoly on salt production. The massive social and economic restructuring and the advent of newer technologies affected the traditional salt production craft in the Noto Peninsula. As new employment options started pouring in, a section of salt makers shifted to other jobs and the salt terraces reduced in number.

The central government launched salt industry modernization measures in 1958 and the traditional salt craft was at risk of extinction. However, the Suzu City administration offered to fund local artisans still practicing the traditional method of salt generation. After some decades, the agehama-style salt making got the tag of an intangible folk cultural asset. Later, in 2008, it was made a national intangible folk cultural asset. This revived interest in yesteryear’s craft.

While the agehama style of harvesting sea salt still exists, certain aspects have changed. The traditional knowledge and practices are receding slowly. Nowadays, the equipment and architectural aspects used by the artisans have changed a little. The artisanal knowledge required for making the ovens and tools is at risk of getting lost.

The present generation of salt makers uses affordable wood waste gathered from construction sites for fuel. That was not the case earlier and traditional salt makers acquired quality wood from inland regions. Some of them were owners of forest areas. The two-stage method used in agehama-style salt making is indicative of interconnectedness where natural forces and human labor are involved.

The agehama style of harvesting sea salt is still relevant as it involves the utilization of natural resources. This method promotes resource conservation. The expertise of the artisans should be utilized by combining it with scientific knowledge and then it will be possible to enhance the craft and augment output.