What Is Mexico’s Cave of the Crystals 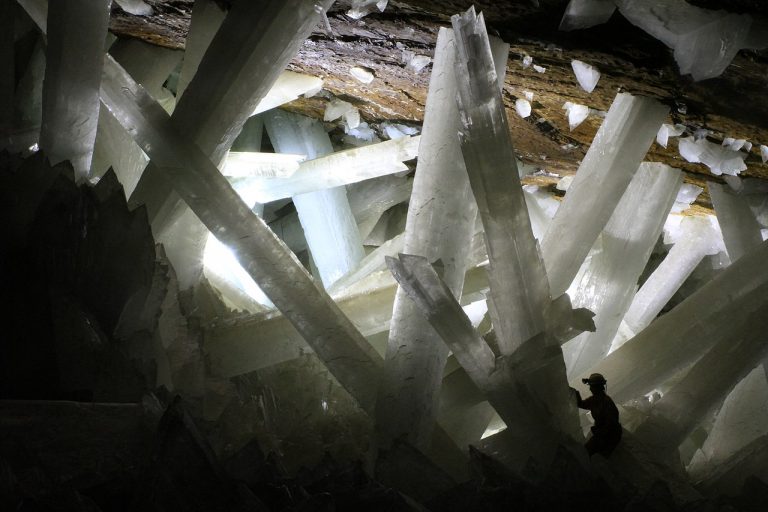 Gypsum crystals in the cave, note the person for scale. (Image: via Wikipedia)

In 2000, a group of miners looking for ore deposits in the mountains of Mexico came across such a natural wonder. They discovered what came to be known as the Cave of the Crystals.

The underground cave is replete with huge-sized gypsum crystals and the milky-white beams can make anyone stunned at first sight. The cave, located in Naica, is shaped like a horseshoe. The bright beams of gypsum are larger than telephone poles and they pop out from the cave’s floor, ceiling, and walls in random directions.

The mountain within which the cave is located is replete with minerals like zinc, lead, and silver. The discovery was made by Industrias Peñoles, a mining company. This Cave of the Crystals has attracted many researchers.

A University of Granada crystallographer named Juan Manuel García-Ruiz came from Spain to see this amazing cave. He had grown crystals in lab environments since his youth, but seeing natural crystal formation like this was a lifetime experience for him. He said about the experience: “When I entered for the first time, after the first couple of minutes of stupor, I burst out laughing. I was euphoric.”

The cave has a typical hot and humid atmosphere, but that has not deterred eager researchers like García-Ruiz from exploring it. Now, scientists are trying to take measures to protect and preserve such naturally grown crystals.

How were these massive-sized crystals created?

The researchers are of the view these crystal poles were created by a mound of magma rushing to the earth’s surface from underground. It turned the mineral-rich waters inside the mountain into crystals. The cave was replete with water infused with calcium sulfate. At first, anhydrite deposits formed in the water were affected by magma. The cooling took a long time. Slowly, the gypsum crystals grew.

It is hard to say for how long the crystals’ growth took place inside the cave. However, researchers think these poles may have grown uninterrupted for approximately half a million years. The poles have varying lengths, as well. A lot of them are 20 feet long, but there are a few that are as long as 36 feet.

For example, in another cave named the Cave of Swords, the water cooling took place faster, resulting in poles that are shorter in height. The crystals in this cave are barely 2 meters long, resembling weaponry of the medieval period. This cave is filled with selenite crystals.

The gypsum crystal formation in the Cave of the Crystals has not come to an end, as it is. The researchers have found a number of small ponds and the water has been drained artificially. This gives the researchers easier access to the mineral deposits in the cave.

However, the atmosphere within the cave is very harsh for humans. The relative humidity is more than 90 percent. The temperature hovers around 50°C. While exploring the huge cave, researchers have to be careful, as rescuing anyone after a fall would be nearly impossible.

Not everyone is allowed to visit the cave owing to these factors and even scientists require a special permit. Because of the atmosphere inside the cave, researchers have been able to spend only 15 minutes or less at one stretch. The mining company installed two doors to ensure the crystals stay protected.

The researchers have nearly fathomed the secrets behind the Cave of the Crystals in Mexico, over the years. The mining company sealed the route to the cave in 2015. Groundwater has filled the cave partially and researchers hope that the crystal formation that came to a halt after discovery will resume again, deep inside the earth.