Black Holes and Dark Matter, Are They One and the Same? 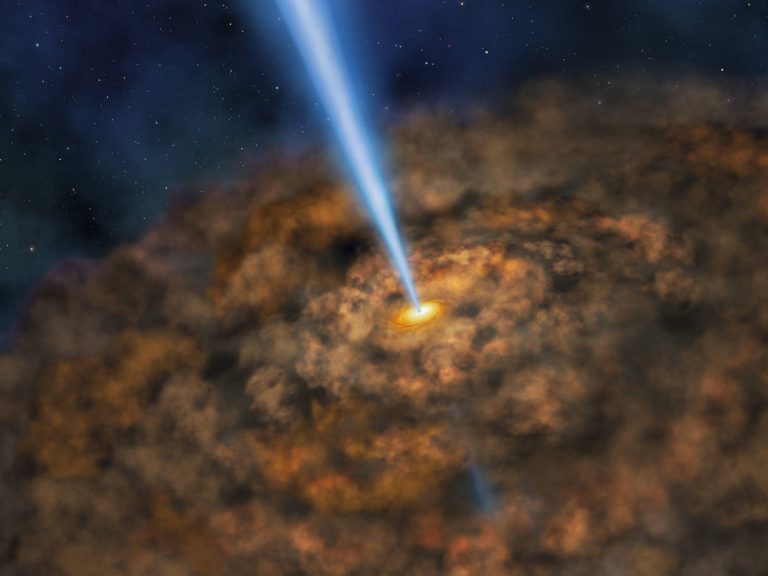 This artist illustration shows the thick ring of dust that can obscure the energetic processes that occur near the supermassive black hole of an active galactic nuclei. (Image: Lynette Cook via NASA / SOFIA)

Primordial black holes created in the first instants after the Big Bang — tiny ones smaller than the head of a pin and supermassive ones covering billions of miles — may account for all of the dark matter in the universe.

That’s the implication of a new model of the early universe created by astrophysicists at Yale, the University of Miami, and the European Space Agency (ESA). If proven true with data from the soon-to-launch James Webb Space Telescope, the discovery would transform scientists’ understanding of the origins and nature of both dark matter and black holes.

Dark matter — which has never been directly observed — is thought to constitute the majority of matter in the universe and act as the unseen scaffolding upon which galaxies form and develop. Physicists have spent years testing a variety of dark matter candidates, including hypothetical particles such as sterile neutrinos, Weakly Interacting Massive Particles (WIMPS), and axions.

Black holes, on the other hand, have been observed. A black hole is a point in space where matter is so tightly compacted it creates intense gravity. Not even light can resist its pull. Black holes are found at the centers of most galaxies.

The new study, accepted for publication in The Astrophysical Journal, harkens back to a theory first proposed in the 1970s by physicists Stephen Hawking and Bernard Carr. At the time, Hawking and Carr argued that in the first fraction of a second after the Big Bang, tiny fluctuations in the density of the universe may have created an undulating landscape with “lumpy” regions that had extra mass. These lumpy areas would collapse into black holes.

Although the theory did not gain traction within the wider scientific community — the new study suggests that, if modified slightly, it could have explanatory power after all.

If most of the primordial black holes were “born” at a size roughly 1.4 times the mass of Earth’s sun, they could potentially account for all dark matter, said Yale professor of astronomy and physics Priyamvada Natarajan, the paper’s theorist.

Natarajan and her colleagues say their new model shows that the first stars and galaxies would have formed around black holes in the early universe. Also, she said, primordial black holes would have had the ability to grow into supermassive black holes by feasting on gas and stars in their vicinity, or by merging with other black holes. Natarajan said:

“Primordial black holes, if they do exist, could well be the seeds from which all supermassive black holes form, including the one at the center of the Milky Way.

“What I find personally super exciting about this idea is how it elegantly unifies the two really challenging problems that I work on — that of probing the nature of dark matter and the formation and growth of black holes — and resolves them in one fell swoop.”

The James Webb telescope’s mission will be to find the first galaxies that formed in the early universe and see stars forming planetary systems. The new study’s first author is Nico Cappelluti, a former Yale Center for Astronomy & Astrophysics Prize postdoctoral fellow who is now an assistant professor of physics at the University of Miami. Günther Hasinger, ESA’s director of science, is the study’s second author. Cappelluti said:

“Our study shows that without introducing new particles or new physics, we can solve mysteries of modern cosmology from the nature of dark matter itself to the origin of super-massive black holes.”

Best of all, the existence of primordial black holes can be proven — or disproven — in the near future, courtesy of the James Webb Space Telescope and ESA’s Laser Interferometer Space Antenna (LISA) mission announced for the 2030s.

“If the first stars and galaxies already formed in the so-called ‘dark ages,’ Webb should be able to see evidence of them.”

“It was irresistible to explore this idea deeply, knowing it had the potential to be validated fairly soon.”

Provided by: Jim Shelton, Yale University [Note: Materials may be edited for content and length.]