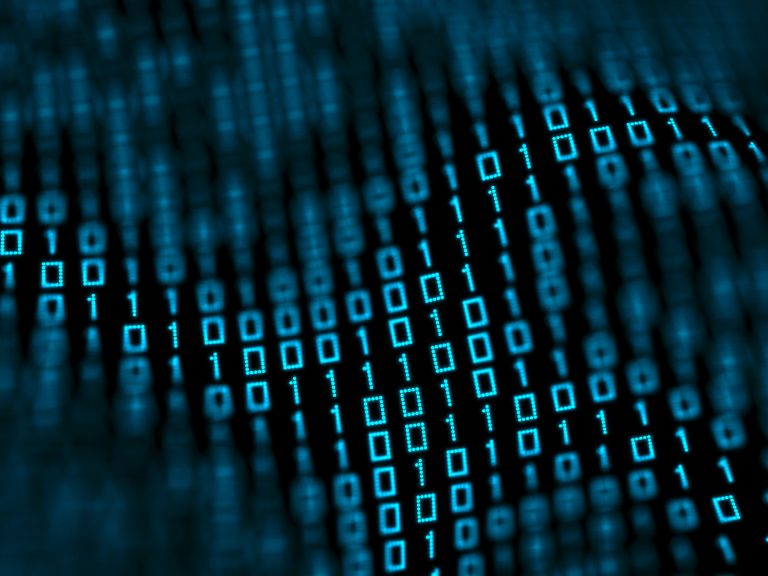 The University of Nebraska–Lincoln physicists have charged to the forefront of spintronics, a next-gen class of data storage and processing poised to complement the digital electronics that have ruled the realm of high tech for decades. (Image: Sur via Dreamstime)

Most scientists would blanch at being labeled a spin doctor. But when it comes to Evgeny Tsymbal, Ding-Fu Shao, and their colleagues, the digital tech lab coat fits.

The University of Nebraska–Lincoln physicists have charged to the forefront of spintronics, a next-gen class of data storage and processing poised to complement the digital electronics that have ruled the realm of high tech for decades.

Ahead of that future, though, loom nanoscale obstacles whose size belies their difficulty. With the wind of a US$20 million National Science Foundation grant at their back, the physicists may be on their way to surmounting an especially tricky one: finding order amid disorder and data amid seeming disarray. Beyond that obstacle lie two prizes, density, and speed, that could make modern-day devices look gluttonous and sloth-like in hindsight.

Electronics read and speak the language of binary — 1s and 0s — by measuring the charge of the electrons flowing through their circuits. Spintronics differs by measuring an electron’s spin: a magnetism-related property that essentially points either up or down. Devices fluent in both dialects of binary can store and process much more data at much faster speeds and with much less power than their electronics-only counterparts.

Those traits make them popular in so-called tunnel junctions, whereby two ferromagnets are sandwiched around an insulating barrier, with electrons “tunneling” through that barrier to move between the ferromagnets. If the spin of an electron matches the spin orientation of a ferromagnet, the electron encounters little resistance, increasing its probability of tunneling through. When those spins don’t match, the odds plummet, substantially reducing the overall flow of electric current. The difference between those two states, known as the magnetoresistance effect, can be read as a 1 vs. 0.

For as well as ferromagnets work, their cousins — antiferromagnets — boast even more promise. Antiferromagnets house alternating columns of atoms whose spins point in opposite directions, meaning that they generate virtually no net magnetic field. No magnetic field means no chance of a tunnel junction interfering with the magnetic state of a neighbor, allowing engineers to pack more data-storage elements into a device without worrying about them corrupting each other’s data.

And if next-gen digital tech devices feel the need for speed, antiferromagnets are again the choice, Tsymbal said. The spins of a ferromagnet can be switched in mere nanoseconds. That seems fast until realizing that semiconductors can operate on the range of picoseconds — a picosecond is to a second as a second is to 31,710 years — or roughly 1,000 times faster than a ferromagnet can switch. Antiferromagnets, meanwhile, can keep pace, priming them for the pride of place in much faster digital tech devices.

There’s just one trifling issue. Encoding or decoding data in antiferromagnets can be a bit like trying to write with a dried-up pen or decipher the scribblings of a toddler. Tsymbal, George Holmes University Professor of physics and astronomy, said:

The same antiferromagnetic property that acts like a pro in one context — the lack of a net magnetic field preventing data corruption — becomes a con when it comes to recording data, Tsymbal said. Writing a 1 or 0 in a ferromagnet is a simple matter of flipping its spin orientation, or magnetization, via another magnetic field. That’s not possible in an antiferromagnet.

And whereas reading the spin state of a ferromagnet is similarly straightforward, it’s not easy distinguishing between the spin states of an antiferromagnet — up-down vs. down-up — because neither produces a net magnetization that would yield discernible differences in the flow of electrons. Together, those facts have impeded efforts to develop antiferromagnetic tunnel junctions with practical use in actual devices. Tsymbal said:

“So this is one of the problems. But I think we have proposed a very, very good way to solve this problem.”

Telling up from down

But only specific types of antiferromagnets are suited to detecting spin-related differences in the flow of electrons, which are driven by a mismatch between the Néel vectors at either end of the tunnel junction. The secret of those antiferromagnets? Momentum-specific channels through which either spin-up or spin-down electrons will predominantly flow.

Tsymbal, Shao, and colleagues identified ruthenium oxide as just such an antiferromagnet. They pinpointed another material, titanium dioxide, as the barrier through which electrons can tunnel. Critically, the atoms of the two respective oxides form the same crystalline structure, resulting in a seamless match that allows electrons to maintain their momentum — and their momentum-dependent spin — as they move between the materials.

By factoring those momenta into analyses of the resulting electric current, the Husker team has shown that it’s possible to distinguish among the channels and, consequently, their responses to varying Néel vectors. According to the team’s calculations, that channel-specific magnetoresistance effect is similar in magnitude to those produced by ferromagnetic tunnel junctions — marking it as an especially promising means of writing spintronic data that can also be read.

As the theoretician has done in the past, Tsymbal is collaborating with the University of Wisconsin-Madison’s Chang-Beom Eom and other experimentalists who can fabricate and test the antiferromagnetic tunnel junction. He and fellow members of the Nebraska Center for Materials and Nanoscience are also busy considering other materials that share ruthenium oxide’s unusual, but not unique, characteristics. Tsymbal said:

“It’s not so many antiferromagnets which have this property, but there are some of them, and we are going to look at these materials in the future, as well.”

The team reported its findings in the journal Nature Communications. Tsymbal, Shao, and Eom authored the study with Ming Li, a doctoral student in Tsymbal’s research group, and Shu-Hui Zhang from the Beijing University of Chemical Technology. The researchers received support from the U.S. National Science Foundation, the U.S. Office of Naval Research, and the National Science Foundation of China.

Provided by Scott Schrage, the University of Nebraska-Lincoln [Note: Materials may be edited for content and length.]