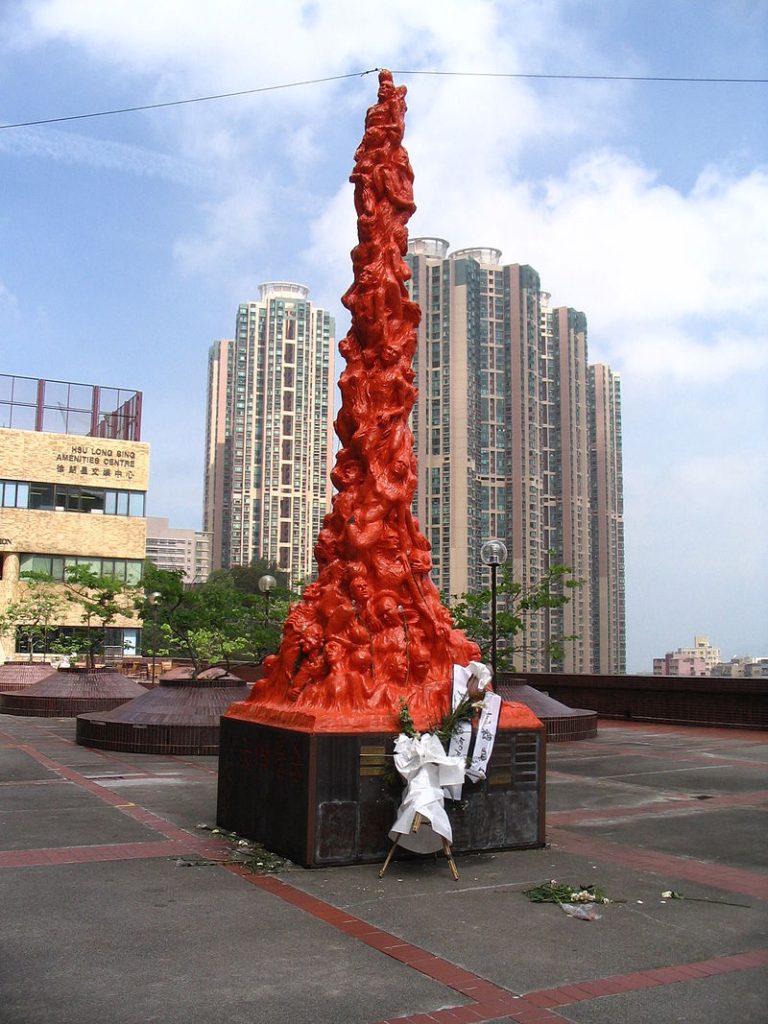 The Hong Kong ‘Pillar of Shame’ on the campus of the University of Hong Kong. (Image: via Wikimedia Commons)

In a recent development, a famous statue entitled the Pillar of Shame for commemorating the infamous Tiananmen Square Massacre was dismantled and removed from the University of Hong Kong. This incident has resulted in widespread backlash and criticism.

The statue represented several corpses piled up together. The 1989 event marked a black day in China’s history and led to the mass killing of pro-democracy protesters by the Beijing communist regime.

In the past, Hong Kong people were allowed to commemorate the protesters who died for their cause. The Tiananmen Square Massacre led to the killing of up to several thousand demonstrators.

The university said that it decided to dismantle the Pillar of Shame statue for the risk posed to others because of its fragility. Construction workers dismantled the 26-foot tall copper statue on the night of December 22, 2021, after the area was cordoned off. Reportedly, security guards prevented news agency staff from filming the event.

Prior to the statue’s removal, after allowing a yearly candlelight vigil in Hong Kong to commemorate the incident, Beijing decided to crack down in 2020.

Hong Kong authorities stopped the annual Tiananmen Square Massacre vigil in 2020 citing Covid restrictions, but activists lambasted them for bowing down to pressure from Beijing. It forced the Hong Kong Alliance in Support of Patriotic Democratic Movements in China to disband and put many of its members in prison.

The famous Pillar of Shame statue remained on the university campus for over two decades before it was taken down. The development was slammed by Jens Galschiot, the statue’s sculptor. He was enraged and said he might sue the authorities for this sudden demolition of his creation.

The Danish sculptor added: “This is a sculpture about dead people and [to] remember the dead people in Beijing in ’89. So when you destroy that in this way then it’s like going to a graveyard and destroying all the gravestones.”

Wang Dan, a student leader and survivor of the Tiananmen crackdown and now a U.S. resident also lashed out at the authorities, accusing the Chinese Communist Party (CCP) of using brute force to hide its crimes.

The view was echoed by many of the movement’s supporters who took to platforms like Facebook and Twitter to condemn the statue demolition. The current generation of students at the university expressed their disappointment over the development. They said it was a sign of an oppressive crackdown of people in power over democracy and freedom of expression.

One of the few remaining prominent, public memorials of the crackdown

The dismantling of the Pillar of Shame statue has also drawn the ire of historians and academic circles. The National University of Singapore’s Associate Professor Dr. Ian Chong said: “[The statue] was one of the few remaining prominent, public memorials [of the] crackdown… and a reminder of Hong Kong’s freer past. [Its removal] takes away yet another public focal point for commemorating the massacre… [and] appears to signal that the Hong Kong and Beijing governments will no longer tolerate public displays of remembrance of the events surrounding 4 June.”

It was followed by pro-Beijing candidates being elected in the recently held Hong Kong parliamentary election. The National Security Law is also being used by the CCP to silence voices of dissent.

The statue was erected on the campus in 1997, the year the city was handed over to China from Britain. The Pillar of Shame was among the few public monuments to commemorate the ghastly massacre that is deemed a taboo topic in China.